On this page of our guide to Warcraft 3 Reforged you will find a detailed walkthrough of The Siege of Dalaran mission. It's time to remove the most powerful enemies in the human realm. The Dalaran mages must fight off the invasion of the Undead. 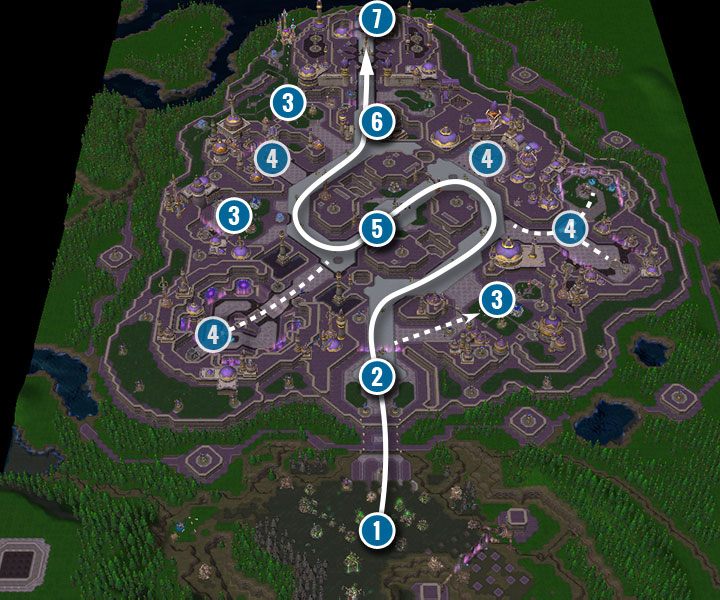 You start the mission at the gates of Dalaran (1). From the cutscene you will learn about the security that magicians have activated. However, you can overcome the defensive spell by killing the Archmagi in the town. Expand your base and prepare to attack the city. The enemy will send out small strike groups from time to time. Build some additional defensive towers to focus on exploring the city.

The protection barrier (2,5,6) will injure all Undead units as long as Archmage lives in a specific area.

Your forces should be varied, but you won't encounter too many flying enemies. It is necessary to expand your own air forces and focus on ranged and supportive units. From this mission, you'll be able to train the Abominations, which are heavy melee combat units. They can also benefit from Cannibalism, have lots of health points and a strong attack. During this mission, you will be able to receive several powerful golems, so it is only worthwhile to train 3-4 Abominations.

When attacking the first Archmage (2), you must remember that your units are being exposed to the barrier. As long as Archmage is alive, all units of the Undead will receive damage. That's why the magician is a priority. He often has a large number of guards, so the melee units will not always be able to catch up with him. That's why it's worth having ranged and flying units to get rid of the threat quickly.

Inside the Dalaran, there are several bases of people where enemy units are being trained.

While exploring the Dalaran, you will come across several defensive posts with numerous training buildings (3). It's worth going off the road to eliminate this threat. Otherwise, the enemy will send assault groups to the back lines of your army or against the nearest Undead base. It's worth taking some Meat Wagons for this task. The catapults will be useful for destroying enemy towers. You will encounter the latter even before reaching the 3rd Archmage. On the other hand, you can train 1-3 Frost Wyrms. Once you have purchased an upgrade, they can freeze enemy buildings and units. With this skill, ground units will safely destroy enemy fortifications. Remember to make the maximum use of Frost Wyrms and let every unit attack a different target.

You can get Rock Golems after getting rid of the Mages of the Dalaran Council and while plundering the vaults scattered on the map (4).

At these human outposts and several locations, you will encounter members of the Mage Council (3,4). When you defeat such a unit, you often gain access to vaults or get some Rock Golems. They're strong units, resistant to magic. In this free way, you will be able to strengthen your army before each attack on the next Archmage. Protective barriers aren't working on the Golems, so they're perfect for attacking the Archmagi. Take care of these units, because they will be useful even during the last battle of this mission. You can cure Golems at the Fountain of Life (6), right in front of the main citadel of mages.

Fighting Antonidas is quite a challenge, as he will summon numerous troops during the battle.

After defeating the last Archmage (6), you will stand at the gateway to Antonidas' headquarters (7). Fighting him is difficult, because he will summon a dozen of soldiers twice. First, it will be golems, then water elementals. The Archmage himself will join the battle after summoning the water elementals. Attack him with all your units, otherwise he will use cast his powerful spells. Once you have destroyed and wiped out all enemy forces then the mission will be successful.