On this page of our guide to Warcraft 3 Reforged you will find a detailed walkthrough of Blackrock & Roll, Too mission. The Army of the Undead must fight the Orcs, who still serve the Burning Legion. 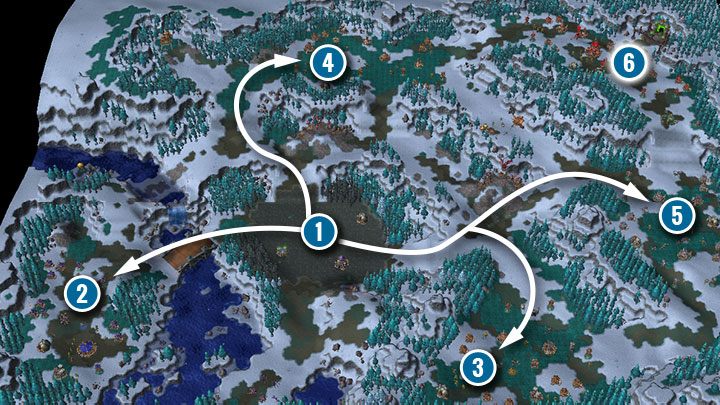 The number of enemies and settlements in this mission may seem overwhelming, but in reality it's not so bad. You start the mission in the center of the map (1), but you are surrounded by 5 enemy bases. Each tribe of the Orcs will send small troops against you, but they never attack simultaneously. However, your base will be in constant danger. It is worth expanding the defense with a few additional towers on each side. Add a few Ghouls and a few Crypt Fiends to the base defense.

Your objective is to defeat the red tribe of Orcs that guard the portal (6). As the only enemy on the map, it has access to powerful red dragons that are not an easy opponent. The other Orc tribes don't need to be eliminated, but they will make the gameplay much easier. It is best to start by destroying the base in the west (2). This is an isolated place that is easy to attack because other enemies will not react to this aggression. Then you can destroy the enemy southeast of your base, which is also at some distance from the other tribes. Finally, you can destroy the Orc settlement, which lies on the path to the main mission objective (5,6).

The Lich King is a valuable acquisition of the Undead faction, which has powerful skills and spells.

In this mission, a reborn Kel'Thuzad will join you. This new hero has some interesting skills, but it's worth using his ultimate power - Death and Decay, which destroys units and buildings in the designated area. The more health points, the more damage this ability inflicts. The Frost Nova is a great tool for attacking groups of enemies and slowing down melee units. Lich can also strengthen your units with the Frost Armor. Use this skill on Arthas or a Frost Wyrm.

The Frost Wyrm can freeze enemy units and buildings, so towers will stop attacking your units.

Frost Wyrm is another novelty available in the Undead race. This is the most powerful unit that has a high amount of health points and can inflict powerful damage. However, it's attack speed is quite slow. The greatest skill of this unit is the Freezing Breath. Your skeletal dragon, can slow down units or freeze buildings and deactivate them for the duration of the freezing effect. This way, individual towers do not pose a threat, and production structures cease to function and train units. The biggest disadvantage of this unit is its price and cost of upkeep - as many as 7 food points. In larger groups, it is worth having at least one such unit, to freeze the most difficult enemies and fortifications.

The Resurrection is a powerful ability of Arthas that can be used to strengthen your army during an attack. Protect your flying units and your Crypt Fiends, because without their help you won't handle the Red Dragons.

When assaulting the Orcs guarding the portal (8), you must be careful of two things. There are a lot of units and towers in the base, so it is necessary to bring the Meat Wagons. Core units of your army are the Ghouls and the Necromancers, who will be summoning skeletons from the fallen units. The second squad are Crypt Fiends, which will attack the mighty dragons. Without their support, the Gargoyles and Frost Wyrms will find it difficult to defeat the dragons. It is important to quickly destroy the dragon lairs and stop their production.

Before you launch an attack, wait for Arthas and Kel'Thuzad to recharge their final skills. The Resurrection will come in handy when you've lost several units or defeated at least 6 enemies. You won't be able to bring the red dragons back to life, but the fallen Crypt Fiends will be equally good units for the battle. Death and Decay will accelerate the destruction of enemy buildings. Destroy all production buildings, towers and red player units to complete the mission.