On this page of our guide to Warcraft 3 Reforged you will find a detailed walkthrough of The Fall of Silvermoon mission. The final stage of the conquest of the Elves' territory is coming to an end. Arthas has to defeat the Silvermoon gates to reach the power source. 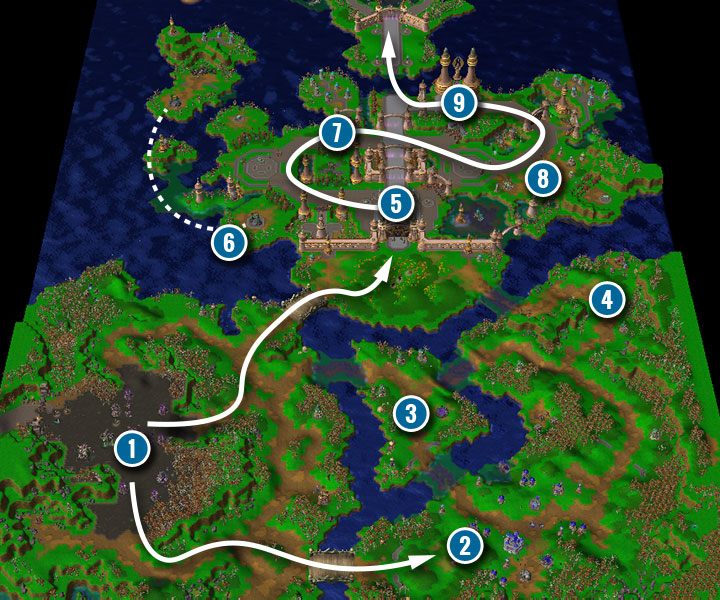 The goal of your mission is Silvermoon, but you will also encounter Sylvanas troops. Your base is located in the left-bottom corner (1), and on the opposite side to the east, there is a blue opponent's base (2). Due to the siege of the Undead, the blue player will send messengers to Silvermoon. Until none of them reach the city, nor the Undead begin to attack Silvermoon, the defenders will remain in the city.

In this mission, you'll gain access to the new flying units - Gargoyles. They are fast and lightweight reconnaissance units, but in a large group they are useful to eliminate weaker enemy forces. They can also turn into statues to regain health points. Use the group you receive in the first minutes of the mission to catch messengers from the southern base (2). The messenger will travel ashore or by boat.

Before attacking southern base or Silvermoon itself, it's a good idea to secure a Fountain of Power in the central island (3). Here you will be able to replenish health points and mana, so it's a very useful place for your units. There is also a mercenary camp (4) on the map, where you can add several neutral units to your army, which have comparable strength to troops that you can recruit.

During the assault on the enemy base, it is worthwhile to quickly eliminate the workers in order to hinder the reconstruction of the base.

Before you attack Silvermoon, it's a good idea to start eliminating the base of blue enemy as soon as possible (2). The Elves in the south will try to warn the city against your attack. Also, they will regularly send troops against your base. What is more, they have a rich gold mine and the resources at the starting point will not last for long time.

The base itself is not very strong, but it is worth choosing the right moment. The best thing to do is to launch an offensive when you defeat the unit that will attack your base. This way, there will be fewer defenders and the hero can be inactive for the time of rebirth. Don't attack if you don't have at least a full team of Ghouls and several Catapults. In case of heavy losses, use the Resurrection skill to bring back to life the defeated units. You will revive the strongest units near the hero, regardless of the side they fought on. . Seize the mine and replenish your troops, while you're staying on the ruins of Elven base.

The new hero of the Undead can drain health points from enemy units and thus heal himself.

When attacking enemy bases or the gates of Silvermoon (5), you will encounter Sylvanas. You will defeat her and turn her into a new Undead unit (Dark Ranger). This hero will be extremely useful in the upcoming attack. Her first ability called Silence can disable the attacks of enemy spell-casting units and prevent them from using spells. At Silvermoon you will come across many wizards, sorcerers and priests. Therefore, you will have to use this ability often. After the gate has been destroyed, it's time to launch a slow attack on the streets of Silvermoon.

Catapults are useful for destroying towers and forests, which often conceal hidden places. It is worth to visit a place that has a portal to a small island in the upper left corner (6). When you defeat the guards, order your units to destroy the rocks. You will meet Trolls. They will join your army.

Don't withdraw your army until you start losing a lot of units. Keep marching along the city streets. At Silvermoon, you'll come across another fountain of power (7), which can be used to heal your units and recover mana points. Restore the health and mana points of all units - be patient. Once you get to that point, the Elves will start sending small groups of units against you. You must destroy the enemy base, which is further to the east (8).

When attacking an enemy base, it's worthwhile to start with getting rid of support units, as they can be quite troublesome during the battle (8). Then, focus on attacking enemy heroes, because their skills can quickly destroy your troops (9).

The sooner you get rid of the Elven base in the city (8), the easier it will be for you to continue conquering the city. After the base is destroyed, the enemy will stop sending assault groups against you. You will need some Meat Wagons here. However, once the buildings are destroyed, you won't need them anymore. The last large group of enemies is located under the village tower (9). There will be a large group of Elves with two heroes. Let Arthas fight on the front line. Meanwhile, Sylvanas should silence his enemies before they cast any spells. The final stage is the battle in front of the Sunwell, where you will encounter a similar formation of enemy forces as you just fought in a minute ago. All you have to do is defeat all units under the barrier to complete the mission.