On this page of our guide to Warcraft 3 Reforged you will find a detailed walkthrough of Key Of The Three Moons mission. On this map, you must defeat the next Elfgate that separates you from the Elven Kingdom. 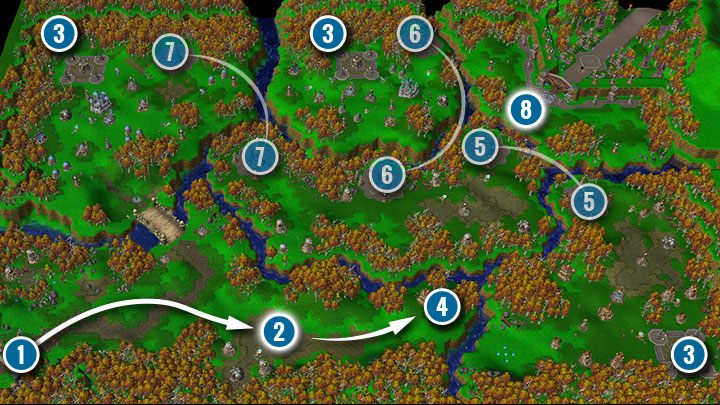 The construction of the map is very unusual because the whole area is divided into islands, separated by a deep river. You will not be able to overcome this obstacle in any way until you come across two objects - a goblin laboratory and portals. You start your mission with a large squad of Undead units in the left-bottom corner of the map (1). Keep an eye on your Acolytes! Without them, you can't build a base and it's impossible to complete the mission. Although the bridge will be destroyed, there is a poorly defended Elven settlement nearby (2).

The battle against defenders in the Elven base will be quite easy as it doesn't have many units - most of them are workers. However, you will encounter flying enemy units. It is best to send Crypt Fiends to fight them, which have a special skill that allows them to catch air units and bring them to the ground for a short time. This way your army can quickly crush the enemy. The Spiders can attack from a distance, but only ground or airborne units that were wrapped up in a spider web.

Use the transporters to move your troops across the river.

After expanding the base, creating several towers and a small garrison, it is time to collect some parts of the key for the gates. The Mooncrystals are scattered throughout the map and hidden in special vaults (3). East of your base (2) there is a goblin laboratory (4) where you can buy transporters. Thanks to these units, you can transport your army across the river. It is worth doing it further to the east because there are no towers or enemy troops there and you will be able to carry out the landing without any problems.

Using the portals will make it easier for your troops to navigate through the map. Each vault (3) is defended by a base and a large number of defenders.

Use 2-3 squad of units to attack each base. The first group is Arthas with Ghouls (and possibly several Necromancers), who will fight against enemy units. The second group consists of 4-8 Crypt Fiends, which are able to catch enemy flying units and support the first line. The third (optional) group is 2-4 Meat Wagons. The enemy has buildings all over the map and numerous watchtowers. A greater number of catapults can destroy enemy structures in seconds.

After obtaining a Mooncrystal and destroying the base in the right-bottom corner (3), you can march north and use the portal (5). This portal will teleport your units to the central island, where two more portals (5,6) are located to the other locations. Although you can deploy your army anywhere by using the transporters, most areas have strong anti-aircraft defenses. Portals are usually not secured and you have time to set your troops in combat formation.

After collecting all 3 parts of the key, it's time to get to the gate (8). The only way is to reuse the air transporters. You can carry out a landing right in front of the main gate, which is the best solution. There's only one tower here and some Elven troops. Don't deploy catapults here, but focus on transporting a large number of Ghouls and Crypt Fiends. Use Arthas' Death Coil to kill flying units, especially if they free themselves from the Spiderweb before you kill air riders. After defeating the enemies, all you have to do is to move Arthas to the highlighted location and complete the mission.