The next chapter of our guide to Warcraft 3 Reforged contains a detailed walkthrough of Into the Realm Eternal mission (Undead campaign). To revive Kel'Thuzad, you need the power of the Elves. You will face the northern enemy in the lands of Quel'Thalas. 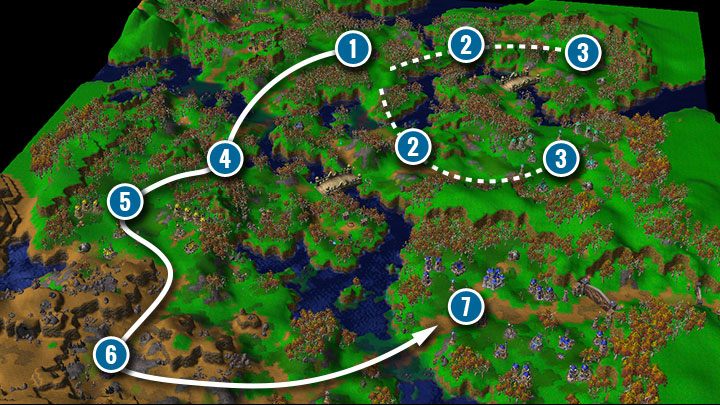 There are many Elven bases and posts on this map, but in order to win this scenario you only have to defeat one enemy which guards the Elfgate (the blue enemy). You start the mission in the top left corner (1) and immediately have to take part in the battle. After defeating the enemy, start expanding your base. You don't have to worry about enemy counterattacks until you destroy the forests, which are a natural wall between you and the Elves (2,4).

Take advantage of the moment of peace to erect all the buildings, increase the food limit, and construct several Crypts and the Temple of the Damned. Don't forget to upgrade your troops by buying technology in the Graveyard. Only then start building the army. Meat Wagons will be essential to destroy trees and further expansion. The disadvantage of this location is rather poor gold mine, but it should be enough to expand the base and recruit a basic army.

The Necromancer is your primary spell-casting unit. Summon Skeletons is an extremely useful skill that can strengthen your army in a short time.

This mission will give you access to the first support unit - Necromancer. His basic skill is the Summon Skeletons spell which creates skeletons from the corpses of fallen units. They bodies must be the remains of organic and ground units. The summoned units, mechanical units and heroes do not leave any bodies if they are killed. Graveyard is the source of the Ghoul corpses, so you can keep the Necromancers to summon skeletons in order to quickly strengthen the base defenses. Don't forget to buy an upgrade that extends the health points of your skeletons so they can fight your enemies longer. The Necromancer has just a few points of health, but it can attack ground and flying units from a distance.

Use the Meat Wagons to destroy the forests in order to break through to the enemy base. From time to time, Sylvanas and her guards may set off against your army, or the nearest Necropolis.

After the expansion of the base and building an army, it's time to start the attack. You can destroy forests in the east to attack enemies in the east (2) in order to gain additional mines and destroy Elven outposts (3), but they won't get you closer to your target. A much better and faster solution is to destroy the forest in the south (4) and attack the south-western Elven base (5).

From the moment of destroying any passageway, Sylvanas and the other Elves will start regular raids on your base. It's worth leaving a small garrison, but focus on destroying the base. Use catapults to destroy towers and production buildings. Also, use Ghouls and Necromancers get rid of their defenders. Remember that Meat Wagons can collect and carry the bodies of fallen units, which will provide new skeletons.

Another important point on your route is the Fountain of Mana in the left-bottom corner of the map. This place is guarded by Golems, which are not a challenge for a full squad of Undead troops. Use this object to replenish mana of Arthas and Necromancers. Before you proceed with your final assault, destroy the small bridgehead before the river and replenish the mana of your units.

When attacking the base, each unit has a different target. Catapults should attack buildings, while Ghouls and Skeletons take care of enemy units. Use Unholy Frenzy on Arthas to increase his attack speed. If necessary, use the Death Pact on skeletons to quickly heal the hero.

Before you enter the main base (7), start bombarding the towers from a distance. As soon as enemies begin to approach, order your Necromancers to automatically summon skeletons and throw them into the battle with the enemy. Then give the command to march to the base in the following order: Ghouls and Skeletons, Arthas and a group of Necromancers, followed by the Meat Wagons. Now start using the bodies of fallen Ghouls and Elves to summon Skeletons. Remember that Skeletons will serve you for a certain period of time, so it is important to sacrifice them in battle as soon as possible. Use Unholy Frenzy on your units to accelerate your attack speed. It is worth getting rid of Priests first, who can heal enemy soldiers.

Stay in the center of the base and destroy the production buildings and the enemy's main building. Kill the workers to prevent reconstruction of the base. Houses and farms can be abandoned because the game doesn't consider the destruction of these buildings as mandatory for completing the mission. Only after you get rid of defenders and destroy most of the training structures, start destroying towers and other buildings. After destroying all important enemy targets, the mission will be successful.