In this section of our guide to Warcraft 3 Reforged, you will find a detailed description and walkthrough of Digging up the Dead mission. Arthas has to revive his previous enemy back to life so that he can once again help the Cult of the Damned to complete its objective. 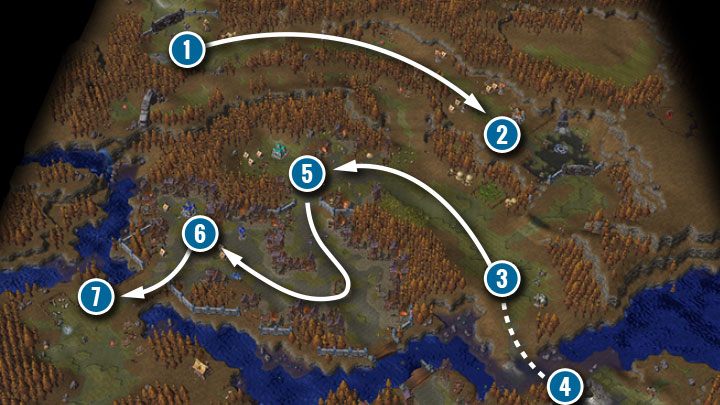 The structure of this mission is divided into two stages: the adventure part and the classic expansion of the base. In the first stage, you must defeat a Paladin and his troops to reach Kel'Thuzad's tomb. You'll receive a lot of troops, but you have to keep an eye on Arthas. He can't die in this part of the mission. Then he will be able to expand the base to finally complete his task.

Use the Meat Wagons to destroy enemy guard towers from a safe distance.

Use the new units to destroy enemy buildings. Your catapults can attack from a long distance and therefore stay out of range of enemy defenses. They can also collect the corpses of fallen units and store them for the Ghouls. At the beginning you will only meet single Footmen and Riflemen. However, you will quickly reach the small post and the Paladin with a garrison. The Paladin will heal his soldiers, so it's worth killing them quickly with a concentrated attack or by using Arthas' spells. After his death and the destruction of the base, you will proceed to the next stage of the mission.

It's time to build the base (3). Start by occupying the mine with a special building and build a Necropolis. You can build new structures only after the area around these buildings will turn into desecrated ground (also known as Blight). All Undead units can regenerate health points while standing on the Blight (desecrated and rotted ground).

The Undead race is quite unusual in terms of economy and base expansion. They don't extract gold by direct methods such as Humans, but instead have to visit the mine by using the Acolytes and then send them to collect gold. They do not have to transport the extracted gold directly to the main building as it is magically teleported to the vault. Acolytes don't have the ability to extract or gather lumber - Ghouls can do it and are able to transport 20 units of this resource. They must carry the wood to the main building or Cemetery, which is a technology building and a source of fresh corpses used to build your army.

All your buildings except the Haunted Mine and the Necropolis, must be built on rotted soil. This area is extended by the Ziggurats, which are the farms of Undead (provide food and increase the upkeep) that can be upgraded to the Ghost Towers (defense towers capable of attacking land and ground units). What's more, the Acolytes can start the construction of a building and then they are able to take care of something else - the building is being summoned and when the process is over, you can use it. If you have enough resources, one Acolyte can initiate the construction of the whole base in a few seconds. The Acolytes can also start the deconstruction process and recover some of the resources.

The mighty Golem has a valuable artifact for your hero, but it's a very powerful unit that can stun many enemies in its vicinity.

The Paladin troops will attack your base from time to time and always come from the north side (3). There won't be any serious threat coming from the south (4), but you may encounter some neutral troops or single Human units. If you start fighting Golems, it's worth gathering a full team and at least one catapult. Destroy the trees in the west, just behind the ramp leading to the hill. You will encounter a powerful Rock Golem there. After you defeat him, you can loot a powerful item that will increase 150 mana of your hero. This way you will be able to use Arthur's spells more often.

The Paladin often uses the Divine Shield to protect himself and attacks your troops while temporary being immortal (5). As long as the shield is active, focus on his soldiers or take care of nearby buildings. Use catapults to attack towers from a long distance (6).

The next step after the expansion of the base is an assault on the Paladin's posts (5,6). For this purpose, prepare 2-3 catapults and one strike group, consisting of Arthas and 11 Ghouls. This small army will be enough to destroy all bases lying on your path. Optionally, you can take an Acolyte with you so he can repair damaged catapults.

When assaulting every enemy base, quickly concentrate all attack power on enemy heroes as they will heal their troops. The Meat Wagons must take the enemy's Barracks as a target, because some new Footmen can still being trained there. In the second post you will come across Knights and guard towers. Let Arthas use the Death Coil to eliminate them faster. Remember that the Meat Wagons can collect the corpses of the fallen and hand them over to the injured Ghouls to regenerate their health (Cannibalism skill).

The battle with Uther is not an easy one.

At the end, you have to fight a duel with Uther, who's guarding the urn. From time to time, Human reinforcements will be incoming, mainly Footmen. Uther himself is not an easy opponent and has a level 10 of experience. He will often use the Divine Shield to protect himself from attacks. You must be patient and don't let your army scatter. As soon as he runs out of protective spells, attack him with all your forces. Don't hesitate to use your skills to strengthen Arthas health or quickly get rid of enemy units. After killing Uther, let Arthas to retrieve the urn. This will successfully end the mission.