On this page of our Warcraft 3 Reforged guide, you will find a detailed walkthrough of The Spirits of Ashenvale mission. Hellscream was given the task of preparing supplies for the construction of the new Orc headquarters. However, the collection of lumber will be disapproved and considered negatively by the local residents. 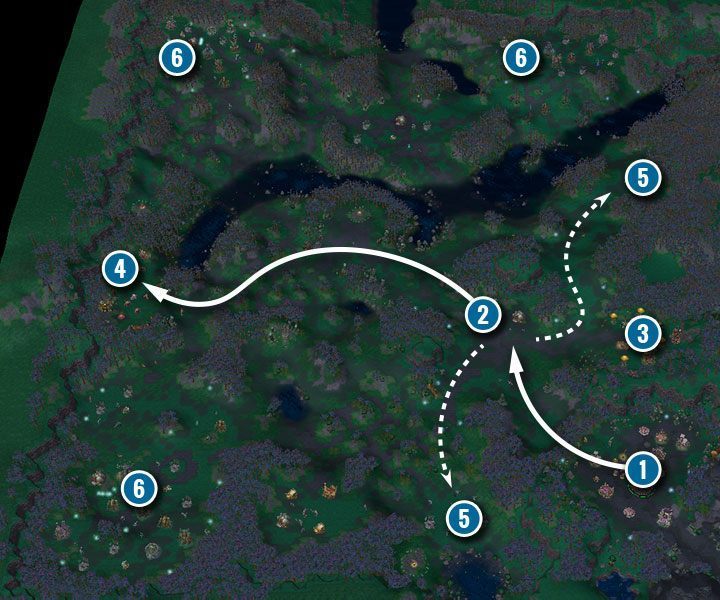 It is an economic mission, but you will have to win quickly. The Night Elves won't be pleased with your business and activities. You start the mission in the right-bottom corner of the map (1). The objective is to amass an astronomical number of 15,000 pieces of lumber. However, in this task, you will have many opportunities to get additional resources. The enemy has as many as 3 bases on the map (2), but the Elves act independently of each other and do not coordinate their movements. You don't have to fight the Night Elves, although they'll send their troops against you.

You will get an extensive base, which has most of the buildings. It is worth to establish additional production buildings to quickly expand the army. Before you start exploring the map, wait for the workers to clear a narrow strip of trees in the north. You can speed up clearing the passage with catapults. From now on, you will be vulnerable to enemy attacks. First assaults will be easy - just a small groups of 4-6 enemy units. Sometimes they will be flying units, so it is worth to have Headhunters, Riders or Watch towers. If you want to quickly get extra lumber to expand your base, destroy small bases scattered on the map (5) or the Trees of Life in large Night Elves bases (6). Larger bases are well defended, so it is worth gathering a large army before attacking them.

The second mine will significantly speed up gold mining (2) and a local buyer may offer new equipment for gathering lumber (3).

The next step is to expand your base further. Gather a group of at least 12 warriors and occupy another mine in the north (2). Send all the workers who collect wood to the mine. Peons are only supposed to collect gold and build new buildings. To cut and transport lumber you will use new neutral units that are available in the laboratory.

Visit a nearby Goblin merchant to get an additional task (2). You need to get rid of the local Furbolg tribe. After their elimination, the goblin will be willing to trade with you and offer his special lumber harvesting machines. Assemble a team of 12 units - half of them are Riders and Grunts, and the other half are units ranged units. In the meantime, place some watch towers around the second base to protect the workers from enemy attacks.

Use Hellscream's mirror image to fight the enemies and protect your own army. For defeating Furbolgs (4), you will get new units for collecting lumber (3).

Furbolgs are not a big challenge, but it is worth not to lose too many units in the fight against them (4). You can use a simple trick - special Hellscream's skill. Send the hero into battle first and use his special skill - Mirror Image. The mirrored images do not deal damage and have fewer health points, but the enemy cannot tell which copy is the real one. The AI opponent always focuses on the nearest opponent. Your units also succumb to such thinking, but direct orders solve the problem. Now send the rest of the team to defeat enemies who are busy fighting a fake hero.

After the elimination of the tribe, return to the Goblin merchant (3). You will get new units that can fight and collect lumber. Goblin saw machines can cut down entire forests and collect 200 units of wood in a short time! It is worth buying a few such machines and start mass lumber gathering. Build additional War Mills to speed up timber transportation and shorten delivery times.

The Tree of Life is the source of lots of wood (5), but only in this mission. Several Night Elves bases have strong defenses - this is an ideal opportunity to try out the ultimate skill of Hellscream (6). Use it among groups of enemies or in area full of buildings.

Another way to get lumber is to fight the Night Elves (6), or more precisely to destroy a particular objects of this faction - the Trees of Life. This is the main building of the enemy army, which trains workers and is equivalent to the Town Hall or the Great Hall. For every destroyed Tree of Life you will receive 3 thousand pieces of wood. There are 5 such buildings in this mission, so you are able to collect the necessary amount of resource without the laborious work of your workers.

On the map there are two small posts, which can be quickly defeated even by a group consisting of only 12 Grunts (5). The other 3 Trees of Life, are in fully-fledged bases that have a large garrison (6). You can only destroy small outposts and collect the rest of the lumber with the help of Goblin workers, or gather a large army and raid the Night Elves' bases. No matter which way you choose, the mission will end when you have collected the indicated amount of lumber.