In this section of our guide to Warcraft 3 Reforged, you will find a detailed walkthrough of The Long March mission. Thrall has decided to help Cairne. In this mission you will have to defend the caravan and clean up the oases for your troops and the Tauren. 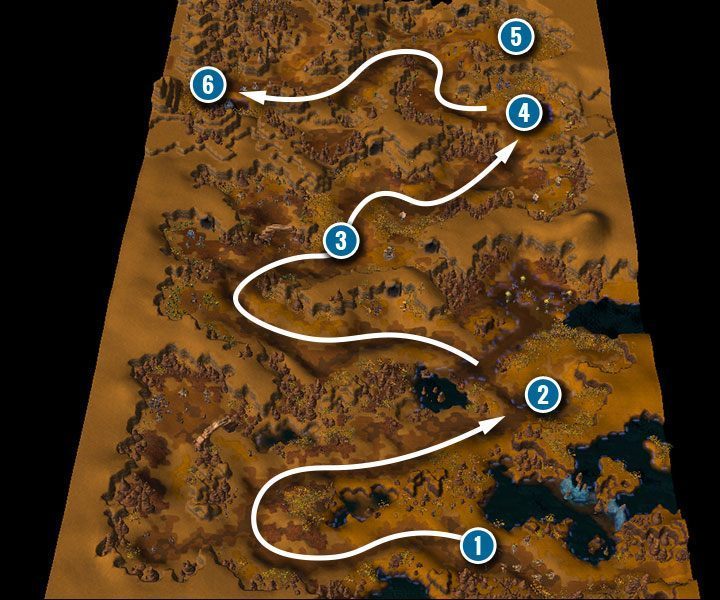 The second mission of the Orc campaign is an escort mission. You must protect the Tauren caravan, which is made up of warriors and the Kodo beasts (1). You start the mission at the bottom of the map. The caravan has to visit an oasis in order to regain strength for further journey. Your job is to keep the Tauren safe and clear the road before them.

There are numerous neutral troops on the map, but you should only defeat enemies that block the path of the caravan. The Tauren warriors are strong and resilient units, but they lack supportive units. They can deal with small groups of enemies themselves without the threat of any losses, but the Centaurs will target Kodo beasts. If you lose these units then you may fail the mission.

Centaurs will send groups of warriors against caravan from time to time. If the Tauren forces cannot cope with the threat, don't hesitate to help them in fighting the enemy.

Send your forces to clear the path for the Tauren. This way you will have more control over what is happening on the map. Also, you won't find yourself in a situation in which a caravan may be attacked by some omitted enemy camp. In the first minutes of the game, hostile Centaur units will regularly appear on the map and track the position of the Caravan. At first, Centaur forces will be small in quantity. However, with time they will grow stronger. The caravan guard can handle them alone. However, a few attacks may defeat 1-2 Tauren, and then the Caravan will constantly need your help. Until your units and your ally get to the first oasis (2), you have to watch the caravan all the time - observe the minimap and react to the messages.

Healing wards are a great tool to heal groups of troops and you can use them during the battle. The nearby beasts have valuable items for your hero. The riders will be useful for destroying buildings and catching flying units.

It's worthwhile to explore the area when you have some spare time (during a calm moment when you're not attacked by Centaurs). Neutral camps and enemy squads often have useful things. The most useful items are Healing Wards, which will allow you to restore the health of your units and save Tauren from certain death.In the center of the map, you'll find a goblin shop (3). Besides additional items and artifacts for your hero, you will be able to buy other healing items. In addition to the Fountains of Life, the items from goblin shop and looted treasures will allow you to get some useful sources of healing.

Before you reach the second oasis, you'll come across a large group of Harpies (4). They're flying units that can smash your troops, and their leader has several abilities. Her greatest advantage is the ability to summon a small tornado, which immobilizes the units and suspends them in the air. It's best to capture Harpies with your riders' nets and send Grunts to fight them. Only after this group has been eliminated the caravan will be able to safely get to the oasis.

Catapults are perfect weapon for destroying enemy towers. Wolf riders can quickly destroy buildings because they have a siege attack type. However, during the battle with Centaur's hero it would be better not to use the catapults as they will inflict damage to your troops. The enemy hero will often stun your units, so keep the remaining units at some distance.

In the second oasis, new units will join your army (4). You'll get Orc catapults that are perfect for destroying enemy buildings. Catapults have a siege attack type, so fortification-type armor will take increased damage, while other armor types take slightly less damage from catapult's attacks. Like most catapults, their attack hits several units/buildings around the target.

Right after leaving the area of the second oasis, you will come across enemy's watchtowers, where you can test the strength and usefulness of your catapults. You can also send Wolf Riders to accelerate the destruction process. If your caravan is doing well, or if it is just taking advantage of the moment and replenishing its strength at the Fountain of Life, then it is worthwhile to deviate from the route to the northeast. There is a Centaur chieftain (5) there, who has several special skills, including Rebirth. After his death, he comes back to life and you must defeat him again. He always leaves interesting items behind and is worth a lot of experience points.

When the caravan moves to the third oasis (5), be sure to travel together with the Tauren. The enemy tends to increase the number of attacks on a group of Kodo beasts. It is necessary to defend these animals. It is simply worth giving the order to hold position to prevent the Centaurs from entering the caravan. The last oasis doesn't have any strong defense. You will only have to fight off a possible Centaur counter-attack (a late group summoned by the script that was supposed to attack the caravan during the march). This is where the mission comes to an end.