In this section of our guide to Warcraft 3 Reforged you will find a detailed walkthrough of Frostmourne mission. It's time for the final confrontation between Arthas and Mal'Ganis. But first you need to obtain the Frostmourne - a legendary blade that may tip the balance and provide victory. 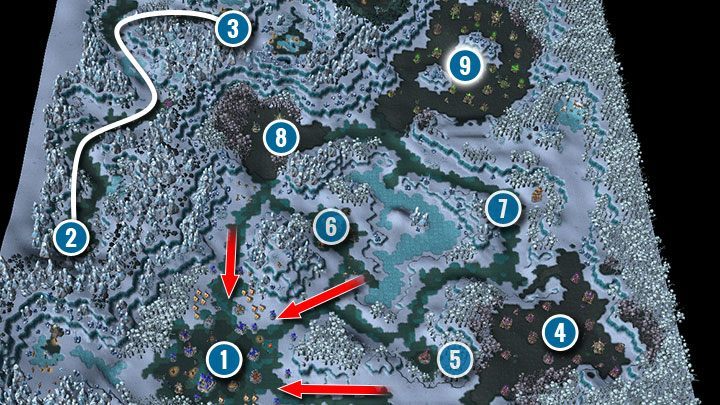 This mission is divided into two parallel stages - adventure and classic battle combined with base expansion. Your buildings are at the bottom left of the map (1), but you start the game after you cross the portal (2).

Arthas and Muradin, together with a small group of soldiers, must find the Frostmourne (3). Take care of the soldiers as they have to survive until the end of this part of the mission. At the same time, the Undead will attack your base, so focus on commanding your heroes. The units you get at the beginning will be enough to defend your base effectively. Purchase and order several technologies. Construct the missing buildings and then focus solely on the search for Frostmourne to complete this stage of the mission as soon as possible. 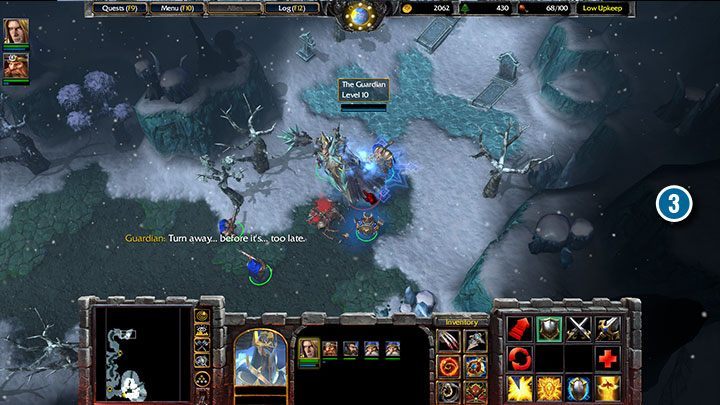 A Guardian is protecting the Frostmourne. He's a difficult opponent, but as a single enemy he's an easy target for Storm Bolt and Muradin's stunning attacks.

On your way to the tomb with the sword, you will meet several smaller groups of neutral enemies. Be sure to keep an eye on the health of your units and do not hesitate to heal your soldiers. You'll find a Fountain of Mana on the way. Make sure to replenish the mana supply for both heroes. Their skills will be extremely useful for the upcoming battle. At the end of the road, you will come across the Guardian who protects the legendary sword (3). It's a powerful unit that has a few spells and a large amount of health points. Use Muradin to stun the mighty enemy as often as possible. Once you've defeated him, you'll watch a short animation and finish the adventure stage. 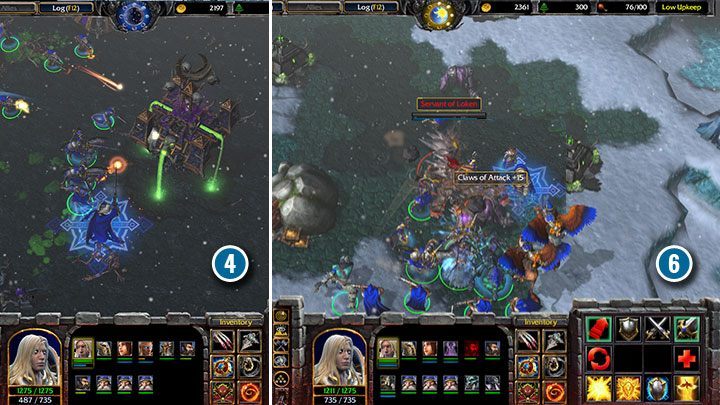 The elimination of the Undead base in the east (4) will calm the situation on the front and reduce the number of attacks on your base. It's also worth clearing the mine near your base from neutral troops. In addition to an additional gold source, you will gain a powerful item for Arthas (6).

Arthas has only one goal now - to destroy Mal'Ganis. Use the new units to complete this objective - Gryphon Riders. They have as many health points as Knights, can fly and deal even more damage than Knights and Footmen. In addition, after being upgraded, they have even more health points and their attack may harm several targets at once. If you have a lot of gold and wood, it is worthwhile to train some riders instead of the Footmen or Knights. You can also create Siege Engines that deal powerful damage to buildings, but are also expensive to train and maintain. These are mechanical units that can be repaired by Peasants. Your workers will fix this machines the same way as the buildings.

Before you invade the Mal'Ganis' base, destroy the Undead base in the east (4). In addition to the assault group, build at least one group of 3-6 Mortar teams or 2-3 Siege Engines to quickly destroy the towers and Necropolis. Once this base is eliminated, most attacks against your headquarters will stop. However, there still will be some occasional attacks from the enemy's main base.

There is a mercenary camp (5) nearby, which contains several interesting units. For example, you can recruit Nerubian spiders, which can summon skeletons in the same way as the Necromancer. There is also an additional gold mine near your base, guarded by powerful Golems (6). If you have low amount of gold or are planning to increase your army considerably, this is a good time to purge the area. In addition, after defeating the largest Golem, you will gain a powerful item - Claws of Attack +15. Arthas, from now on, will be able to inflict massive damage. There is also a goblin shop in the area where you can replenish Arthas' supplies (7). 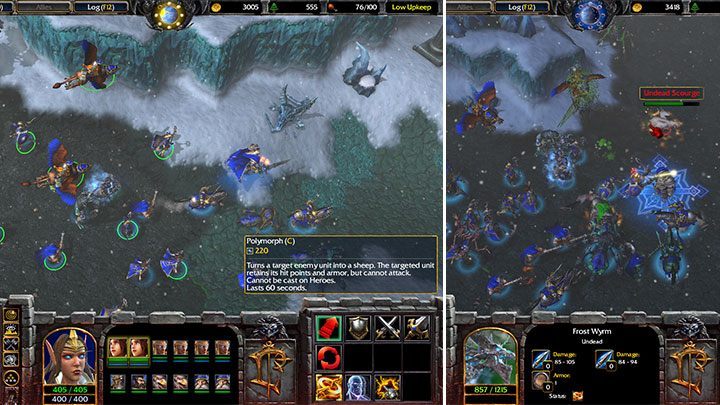 The Sorcerers can gain access to Polymorph by purchasing both upgrades at the Arcane Sanctuary. This ability to turn into a harmless critter is extremely effective in fighting the strongest enemies such as Frost Wyrms.

It's time to destroy the last two bases of Undead forces. Start with a small outpost north of your base (8). Two full teams, consisting of Knights, Riflemen and Gryphon Riders, will handle the situation without any problems. Before you start your final attack, don't forget to train your Priests and Sorceress and develop masterful upgrades for these units.

Priests can cast Inner Fire on allies and increase their damage for 1 minute. Sorcerers can get the most useful spell of the Human faction - Polymorph. Polymorph can turn every unit into a small critter except the heroes. This way, you are able to exclude even the strongest enemies from combat for a short time and easily defeat them. This spell consumes a lot of mana. It is best to use Polymorph on Abominations and Frost Wyrms (Undead dragons). These dragons are the most powerful units of the Undead, deal huge magical damage and can freeze your units.

When attacking Mal'Ganis' main base (9), remember not to move your troops into the middle of the base. The enemy has numerous units and buildings. Attack the outskirts of Undead base and wait for the garrison of troops to approach you. Watch out for Necromancers and Nerubian spiders that will immobilize your Gryphon Riders. When the Frost Wyrms appear, use Polymorph and attack all units to get rid of the threat as quickly as possible. Eliminate buildings methodically and slowly. The more production buildings you destroy, the more advantage you gain. Once the base is destroyed, the mission will be successful. This is the end of the Human campaign, but not the end of the Arthas story.