On this page of our guide to Warcraft 3 Reforged you fill wind a detailed description of the Dissension mission. The army of Arthas has received an order from the King to return to the continent and abandon the Prince's mission. However, Arthas has other plans. 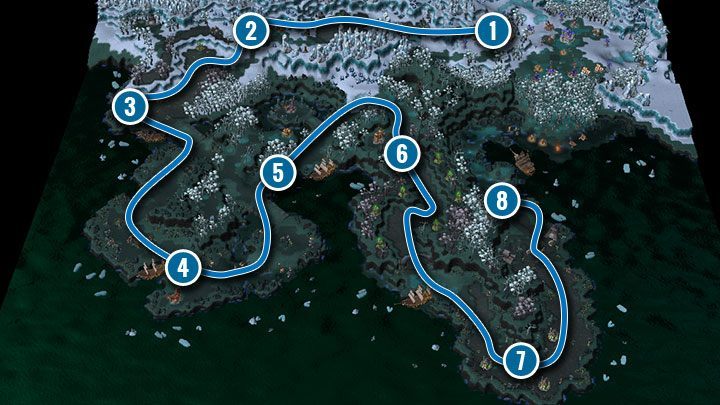 This is a typical adventure-like mission and the gameplay is entirely linear. In this mission you can lose your heroes because you have the Altar of Kings. This building allows you to summon fallen heroes. At the beginning you start playing with Arthas, Muradin and Mortar teams. Dwarves will be useful for destroying enemy ships and buildings. You start the mission right next to the human base (1). It's time to get allies to help. 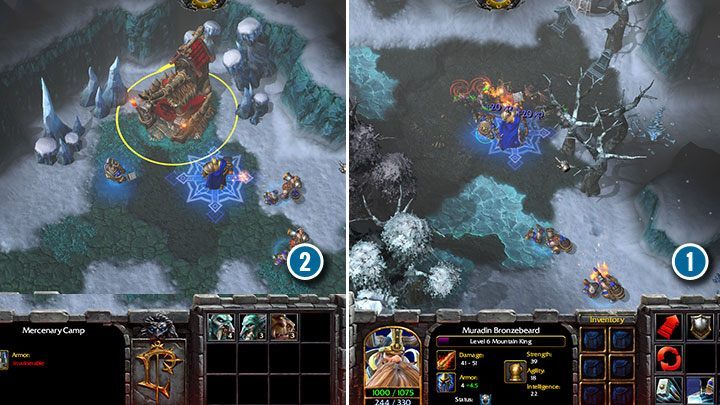 Muradin is an extremely effective warrior who is a better fighter than Arthas.

Before you can get new companions to complete the mission, you have to break through armies of Undead (1). Muradin is best suited to this task. He can throw a hammer that will stun and deal damage, but can also hit the ground with the hammer, dealing damage to all enemies around it and slowing them down effectively. He's a great match for Arthas, who can treat him when he takes some heavy damage.

After defeating your first enemies, you'll quickly make it to the Mercenary Camp (2). Here you can buy units that will join your team. Buy out all units and continue your journey. Just outside the camp, you'll find several towers of the Undead. Use the mortars to destroy the towers from a safe distance. If your troops are unable to see the tower, use the order to attack the designated area. After a few volleys, check out how the tower's durability level. Now it's time to sink the first ship of your soldiers (3). 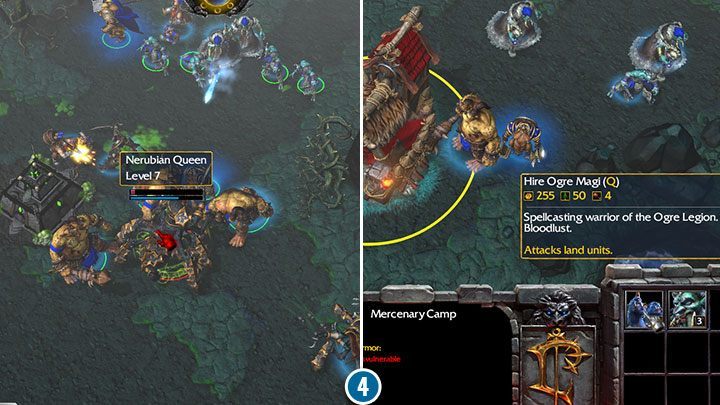 The Nerubian Queen is a powerful enemy, but she can't avoid the Storm Bolt - one of Muradin's stunning abilities. Recruit more soldiers in the next mercenary camp.

Before you get to the next ship, you have to defeat the some spiders and the Nerubian Queen (4). It's a pretty strong opponent that can make a lot of trouble. Use your mercenaries to quickly defeat this enemy. It's worth stunning the enemy with Muradin's first skill. After her death, you will receive Claws of Attack +12, which you can use to strengthen any hero. It's time to burn another ship.

Here you will visit another mercenary camp. It's worth buying the Ogres in this camp. They're a useful hand-to-hand combat unit, with Bloodlust skill. This spell strengthens your units and increases their attack speed. The spell is cast automatically on allied units that stand in the vicinity (during combat), but it's worth choosing your targets manually and cast Bloodlust on your heroes. 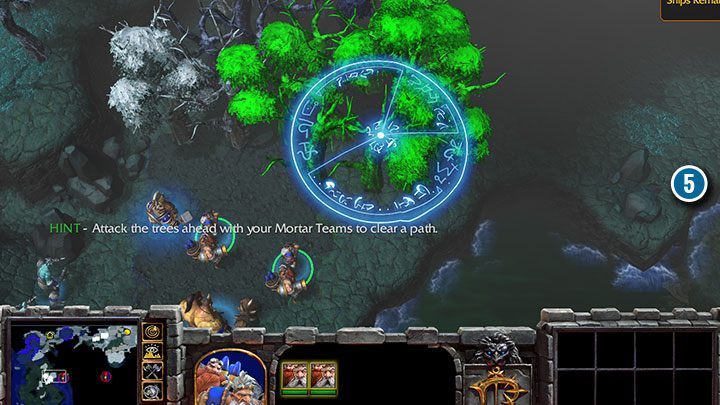 Use your Mortar teams to bombard the trees in your path.

Before you get to the next ship, you have to get rid of the little forest that is blocking your path (5). Use your Mortar teams to destroy all obstacles. After a while, the road will be open. If you lost your dwarves in combat, you can find a goblin store nearby which sells Goblin Sappers. You can hire them to blow up trees. Now destroy another ship. There is the third and last Mercenary Camp nearby - it offers the best soldiers. You must recruit several Troll priests and Ogres who are tough and deal a lot of damage. Trolls can cure individual units in the same way as Elven priests. 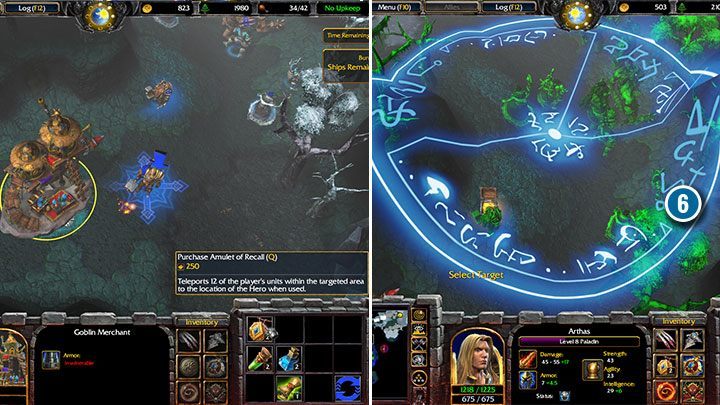 The valley filled with many towers of the Undead can be problematic. However, all you have to do is buy an amulet in a nearby shop, order Arthas to run through the valley and summon the units on the other side of the valley.

When you get to the goblin store, a nasty surprise awaits you. A valley in front of you is filled with enemy towers (6). They can't be defeated in time, so the easiest way is to just run to the other side. You can do this with the help of all your units, but there is a chance that you will lose a few soldiers and there is no way to recruit new mercenaries later on. The best way is to buy an amulet in the shop, use the Divine Shield and run to the other side alone. Now all you have to do is to use the amulet to summon your units and sink another ship.

There are two major battles awaiting you. First, you'll reach the Undead cemetery (7). Cemetery consists of several enemy buildings, filled with dead bodies which are used by necromancers. Start by eliminating warlocks and then kill the Undead forces. The last group of enemies is guarding access to the fifth ship of the fleet (8). Here you will face the Undead forces again, but if you still have a full mercenary team at this stage you have a good chance to win this battle without any problems. Use Holy Light often to eliminate weaker enemies or heal your soldiers and turn Muradin into Avatar, the more powerful version of the dwarf.