On this page of our guide to Warcraft 3 Reforged you can find a detailed walkthrough of The Culling mission. Arthas decides to take a drastic and controversial step that will not only change the fate of the inhabitants of his land, but also his own fate. 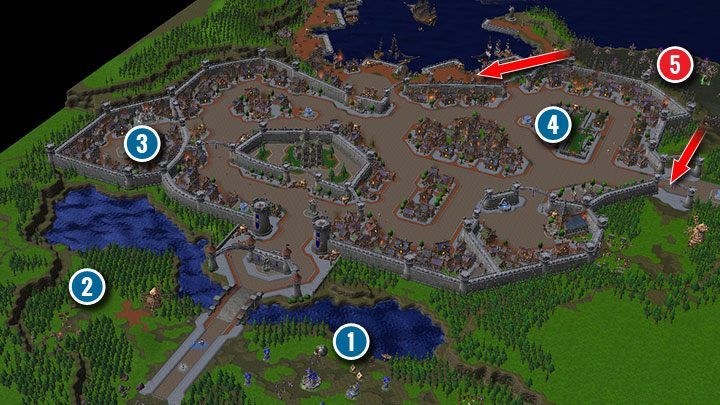 Stratholme - a city infected by the plague, which is swarming with the undead.

One of the most challenging missions in this campaign is ahead of you. Your goal is to kill 100 zombies before Mal'Ganis. Your base is just south of Stratholme, at the bottom of the map (1). The enemy base is on the other side of the city (5), but it is not the objective of your mission. Besides, it's going to take too long to destroy this base.

Reinforce your base with a few additional towers on the west side, right next to the already standing guard towers. The undead will sometimes send troops against your base. Train Footmen and Riflemen, then get out of base as soon as possible. In the meantime, improve the Town Hall, build the Workshop, the Arcane Sanctum and start training priests.

In this mission you will receive a new type of unit - a Knight. It is an improved version of Footman, has twice as many health points and deals twice as much damage. It is worthwhile to switch to Knights production as soon as possible in place of the Footmen and use their services as often as possible. It is worth forming a group consisting of Arthas, 5 Knights, 4 Riflemen, a Priest and a Mortar team. Such a team will be sufficient to complete most tasks in this mission. 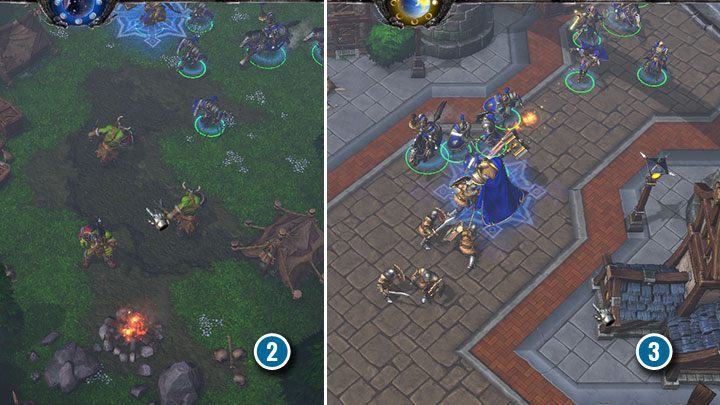 Below the city there are some Grunts who have a useful item for your hero (2). There are numerous threats in the city, like Stratholme militia (3).

Before you enter the city, go to the Orcs camp to the west of your base (2). Defeat them to collect some powerful loot like Gauntlets of Ogre Strength +3 or magical amulet, which increases mana by 150 points. At the beginning of the mission, it is worth avoiding the Town Hall of Stratholme, because a militia group resides there (3). Defeating them counts as killing the city's residents, but hold off the attack until you've strengthened your team. At the beginning it is better to focus on civilians. 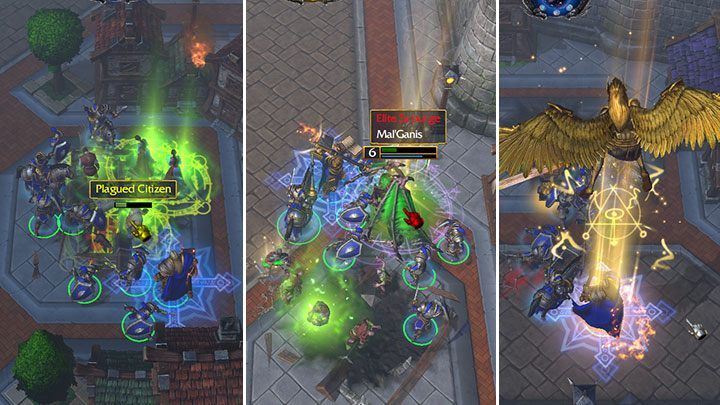 Eliminate the residents before they turn into aggressive monsters. As soon as Mal'Ganis arrives, gather your soldiers and remove him from the battlefield. Resurrection spell is unlocked when Arthas advances to level 6 and is an extremely useful skill in the battle.

The most important aspect of this mission is the efficient extermination of infected inhabitants. That's why it's worth having a few ranged units, like Riflemen or Mortar teams to destroy buildings at a much faster pace. There are 3 to 5 inhabitants in each house. When you destroy a building, you don't have to wait for the residents to turn into undead! Choose the manual attack command and eliminate the defiled civilians. If you have a mixed group of troops (melee and ranged soldiers) you are able to eliminate 1-3 inhabitants before they turn into enemies. Not only will you speed up the slaughter, but you can also save yourself the effort of fighting the enemy and the need to heal your soldiers. Therefore, you will quickly get ahead of Mal'Ganis.

Mal'Ganis will also immediately take part in the slaughter of civilians, along with his guards. It's worth to stop destroying the buildings and eliminate the enemy hero. Mal'Ganis will use two spells: Carrion Swarm and Sleep. The first deals damage to all units in a straight line from the caster. And Sleep incapacitates the selected unit. Elimination of the hero is very important because it gives you more time to slaughter the villagers. Every time you defeat Mal'Ganis, he'll drop an item. At first it will be just a potion, but later you can find a more useful artifacts.

Mal'Ganis will be reborn from time to time with a growing and larger army at his side. At the end of the mission, it's worth focusing on destroying buildings and eliminating villagers than fighting him. If you have to confront him, then it's worth using the best spell of Arthas - Resurrection. You will be able to bring back to life 6 fallen warriors with full health points. Therefore, it is sometimes worth saving mana for the Resurrection instead of constantly healing your troops. 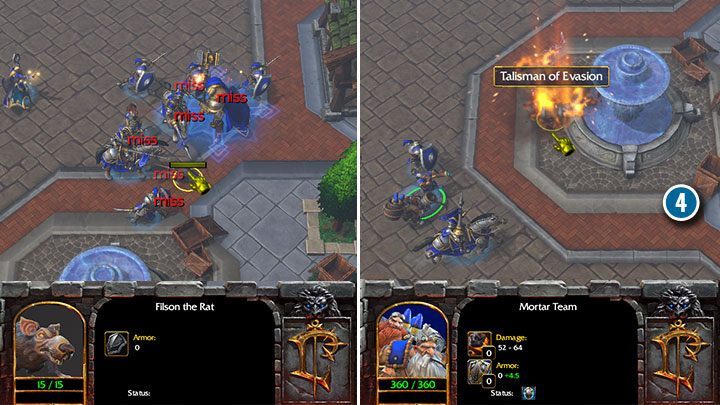 This is incredibly agile, but it stands no chance with a mortar. Once you defeat him, Arthas will be able to use the Talisman of Evasion.

While destroying houses, you may run into two new enemies, some kind of mini-bosses. It'll be a more dangerous version of Abomination and Necromancer. They belong to the army of the Undead, not to the people of Stratholme, but the fight against them is not easy. Don't send too small divisions of troops to destroy buildings so they won't get killed by the Undead.

There is also an unusual rat on the map, that cannot be hit by soldiers (2). It usually wanders around the fountain, in the north-eastern part of Stratholme. Classic attacks cannot defeat it. Instead, you have to use the AoE attack of a Mortar team. After you kill a rat, you'll get one of the best items that can be obtained in this campaign. An amulet that grants a 15% chance to dodge an attack. This is an extremely valuable artifact and you must keep it until the end of the campaign.