This chapter of our guide to Warcraft 3 Reforged contains a detailed walkthrough of Ravages of the Plague mission. 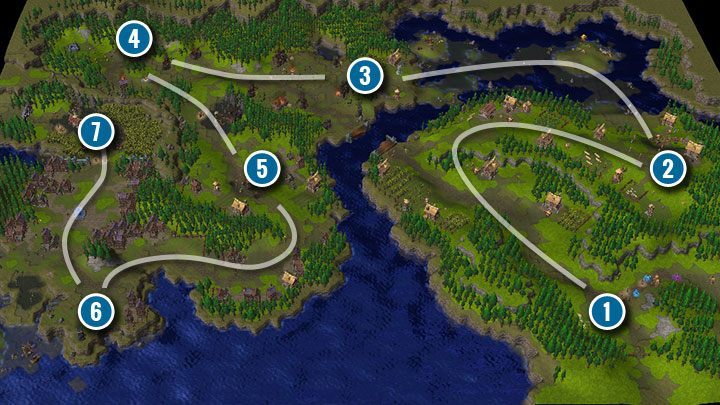 You start the mission in the lower right corner of the map (1). This is a typical adventure mission. You can't expand your army or base here. You have Arthas, a few Footmen and a new character (Jaina), at your disposal. The heroine is a mage and has some interesting abilities. First of all, she can summon the Water Elemental. He'll fight for you for a short time. It's worth using the elemental as a lure that will take most of your enemies' attacks and damage. Before the battle, summon the elemental and command him to fight first. After a while send your troops. 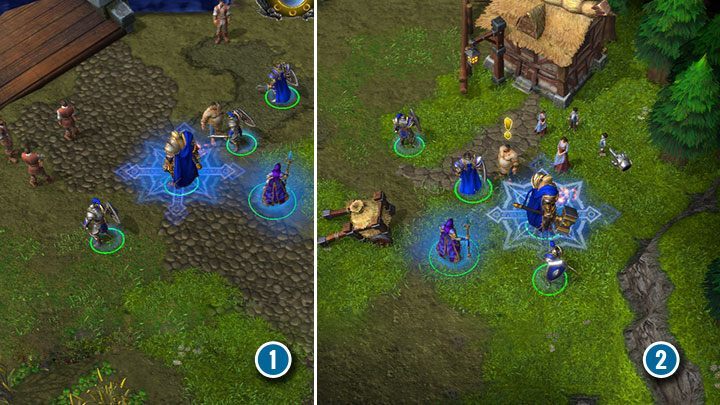 The bridge is destroyed, but there is an alternative route (1). Along the way, you'll meet villagers who are running away from the bandits. As a gratitude for the provided protection, you will receive an item from one of the villagers (2).

Head towards the bridge, which will be destroyed (1). You'll have to find another way that leads through the river. Head east. You will encounter a group of bandits who attack the villagers (2). Remember to heal your troops and use Jaina to summon the elemental. It can attack from a distance, so it may complement your team, which is mainly strong in melee combat. One of the villagers will give you a reward and tell you about the Fountain of Health. While crossing the river, you'll meet a small group of Ogres. They won't be a challenge as long as you eliminate them one by one. 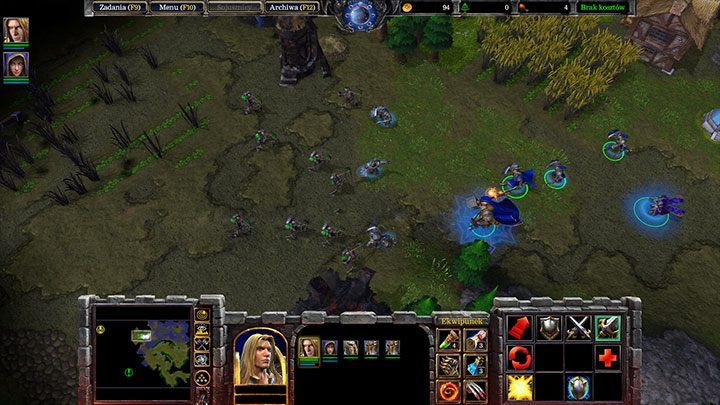 The battle against skeletons can be challenging - attack a whole group of individual targets and use Arthas' Holy Light to heal your soldiers and attack the enemy.

After crossing the river, you will come across Footmen from the local garrison who fight a large group of undead skeletons (3). Quantity can be a challenge, but you'll gain extra soldiers. Focus your attack on individual opponents to quickly eliminate them. The Holy Light deals damage if it's used on an undead character (half the health points that would normally be restored to a friendly unit). From this point on, the Defend ability of your Footmen will be activated. They can use a shield to reduce incoming damage. It's worth turning this ability on every time you fight with ranged units.

Going further to the west, you will find the Fountain of Health (4). The defenders aren't a challenge for you, but it's worth pulling them away from this place. Send in your group and after a while, step back a little to lure the enemy. This way no one will benefit from the healing properties of the fountain. After the fight, heal everyone at the Fountain of Health.

Now it's time to head south. You'll find the first warehouse with poisoned grain there (5). You will also come across some ghouls and a necromancer. This first type of enemy is the basic unit of undead army. It is quite fast and can heal itself by eating the corpses of fallen enemies, but in fact it is the equivalent of a Footman.

The necromancer is a demanding foe, as he can summon two Skeletons from the bodies of fallen enemies. It's worth attacking him first and only then wipe out all other enemies. If you get rid of his vanguards first, the opponent will summon additional units and the battle may be dangerously prolonged. If you upgrade the Holy Light skill, then Arthas can get rid of this opponent with just one cast - the Necromancer (without upgrades) has 275 health points, and the Holy Light rank 3 inflicts up to 300 damage points to undead units. 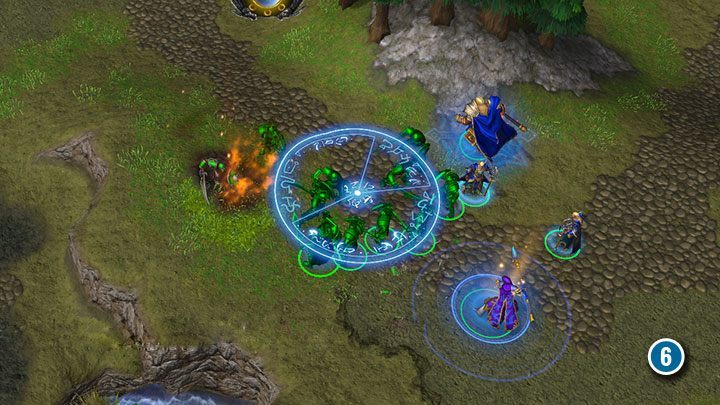 Use Dispel Magic spell to eliminate groups of skeletons. You can also use the Blizzard spell. Jaina can summon a rain of ice shards that will deal area of effect damage to enemies and allies for a short time.

On the further road you will meet new units that are willing to join you (6). Priests are Elven healing units. Their basic spell restores a small number of health points. Also, you can activate automatic healing mode. This way, priests will heal wounded allies in the area on their own. Their second ability called Dispel Magic, allows them to deal 200 damage to summoned units (for example, like skeletons) and removes all magical buffs or de-buffs applied to particular unit. Dwarves (Mortar Team), on the other hand, are long-range siege units, equipped with mortars. They are perfect for destroying buildings and attacking groups of enemies from a long distance. 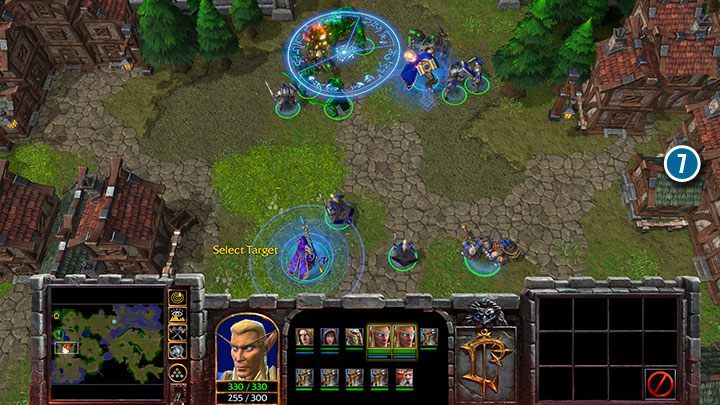 Defeating the last group of enemies will not be a problem if you keep the whole team alive for this part of the mission. First of all, quickly get rid of skeletons with your spells and then attack other enemies.

On your way to the mission objective, you must pass through a city that is filled with Ghouls and skeletons. Your reinforced army should be able to cope without any problems. It is worth waiting for all opponents at the city gates. It's easier to track down enemies. Also, you won't expose your weaker units to danger.

There is the first grain warehouse just outside the city that you must destroy (7). A new type of enemy troops will join the battle - the Abomination. It's a better version of Ghouls, which has more health points and deals more damage. In addition to new enemy type there will be several Skeletons and Ghouls to kill, so it's worth to get rid of the smaller enemies first and then focus all your forces on the Abomination. Then destroy the building to successfully complete the mission.