In this section of our Warcraft 3 Reforged guide, you will find a detailed walkthrough of Blackrock and Roll mission. Arthas and Uther have a new task of defeating the Orcs, who threaten the local people. In this mission, you will learn the basics of expanding your human base. 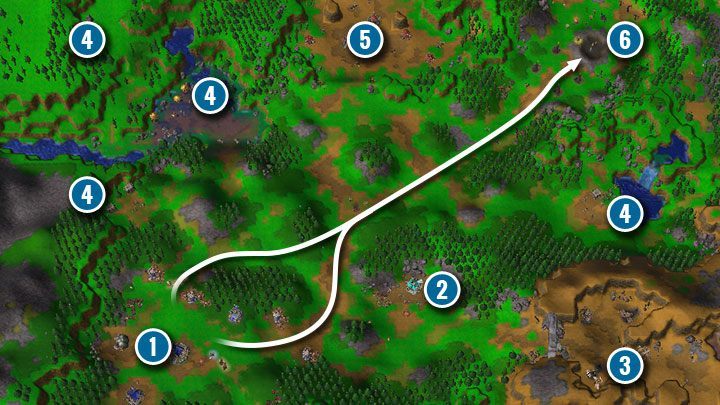 Your base (1) will be under constant attack from Orcs (5). Your target is the Blademaster.

Before you set off to defeat the Orc leader, Uther wants you to establish your base (1). You'll start the mission with a lot of financial resources. It's worth training some Peasants to collect wood. Five workers who are already mining gold should be enough. If you build the Town Hall as close to the mine as possible, then 5 workers will be the optimal number. This will ensure optimal gold mining. To improve the logging, it's worth constructing a Lumber Mill. This way, the Peasants will have a shorter way to transport the wood.

Start by building Barracks and Farms. This way you'll have the right facilities required to train more Footmen. It's worth building the second Barracks to speed up your troops' training. If you lose many Footmen, then you can restore your forces at a much faster pace. Footmen are cheap and basic units that fight in close-combat. They will be useful as cannon fodder, which takes the first strikes of enemy forces.

The Blademaster is not an easy opponent, but he will not dare to attack your base personally.

When you've finished expanding the base, Blademaster will appear. After a short conversation, you will receive a new mission objective. Battling an Orc is not going to be easy, so you need to strengthen yourself. Although Uther will defend the camp, it is worthwhile to train a few Footmen to become a garrison or build additional towers. Orc attacks are not strong, but they can harm your economy. 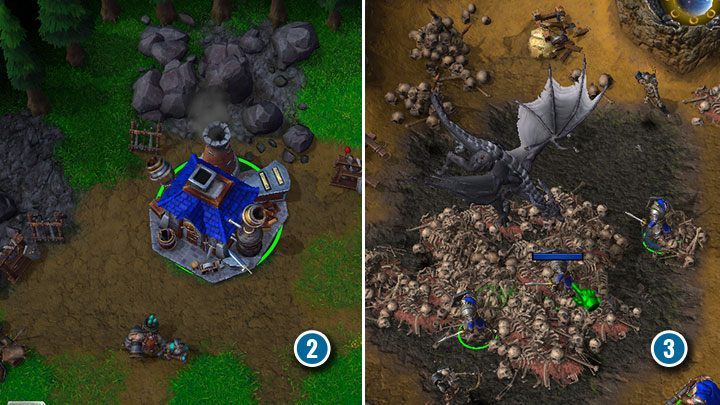 The dwarves will assign the task to Arthas (2). Defeating the dragon will grant you a significant reward (3).

Once you've gathered a group of troops, it's worth starting by visiting the dwarves (2). You will receive a task that requires you to clear a nearby cave and defeat the Searniox Dragon (3). You can't do it just with the help of Footmen, so you'll get a couple of Riflemen under your command. This is a new ranged unit. For this task it is best to send a group of 5 Footmen, 6 Riflemen and Arthas. Additionally, from now on, you can build the Blacksmith. At Blacksmith, you can buy basic technologies that improve and enhance the attack or defense stats of your basic units.

Before you come across a dragon in the depths of the cave, you have to defeat some minor creatures. The battle itself is quite simple. The Footmen will take care of the skeletons, Arthas will heal the wounded units, and the shooters can focus their fire on the target only (3). Take the heart of a defeated dragon to the Dwarves. You will get a Orb of Fire +5. The damage bonus itself is nothing compared to the ability to deal area of effect damage and the ability to attack flying units. This way, Arthas will be able to start a fight and defend himself against any enemy. 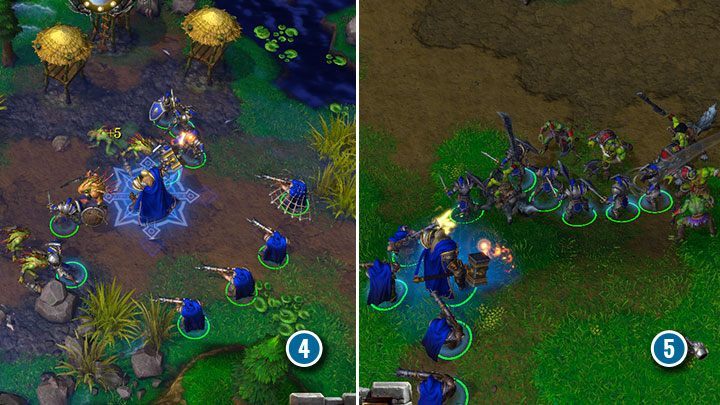 There are numerous hiding places of neutral enemy groups on the map (4). It is worth to defeat them and clear every such camp to gain valuable experience and items. The Orc base has strong defenders - don't go there unprepared (5).

There are several smaller and larger bandit camps, Murlocks, and other settlements around your base (4). Destroy them to get extra gold and experience for Arthas. Also, you will have a chance to obtain strong items. One of the groups will leave Gauntlets of Ogre Strength +3, which increases your champion's damage and health points as long as he has this item in his inventory.

There is a large Orc camp on the map, north of your base (5). You can burn this base to the ground, but this is not required to complete the mission. The battle with the Orcs is difficult, because their basic units (Grunts) are stronger than the Footmen. That's why it's worth avoiding the battle with the Orcs at their base. However, if you want to clear this place, you have to train a second group of 12 soldiers (any configuration). This way, you'll be able to take part in an equal battle with the green-skinned orcs. 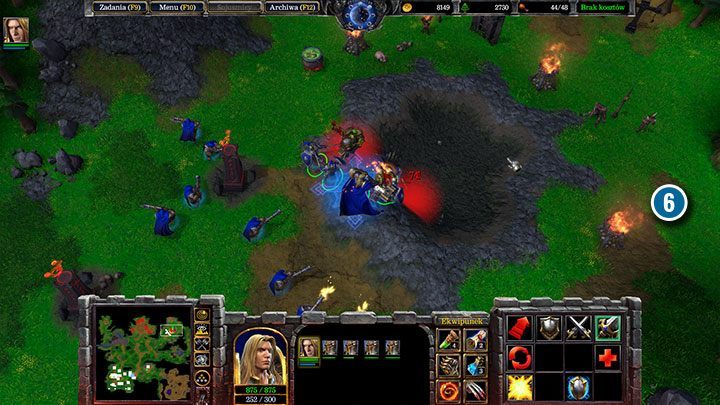 The battle with the Blademaster is quite simple - take a large army with you, especially ranged units.

The Blademaster is waiting for your arrival at the altar with the local people. It's time to prevent human sacrifice and stop shamanic rituals. The Blademaster is alone and has quite a low level, so he is not a big challenge. His strength is determined by his skills. He can make doppelgangers of his character - mirror image spell. They do not deal damage, but create chaos and make it difficult to kill the right enemy. The mirrored image can be recognized by two things - the image loses health points faster and inflicts less damage to your forces.