On this page of our guide to Warcraft 3 Reforged, you can find a detailed walkthrough of The Defense of Strahnbrad mission. This is the first mission of Human campaign which introduces key characters of the story like Arthas. 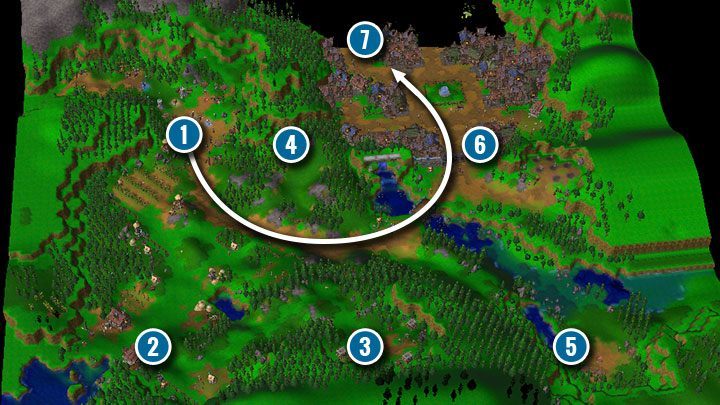 You start the mission in a camp near the mission objective (1), which is the city of Strahnbrad (6).

After Arthas talks with Uther, you will start the mission in the upper-left corner of the map (1). Your hero is a paladin who fights in close combat. His first skill heals allied soldiers, but you can't use it on your hero. Before each battle, send your troops ahead and keep your hero in the back, so that Arthas won't receive any damage. Soldiers can be healed, but to save his own health, Arthas must use Potions and other items that will be available soon.

A squad of 4 Footmen and Arthas should be enough to get to the mission objective and defeat Orcs in the city. It's worth looking around the area to raise Arthas' level and get some useful items. Head south, holding on to the left edge of the map. In the village (2) you will encounter peasants who want to join you. You will get some extra soldiers. In the same place, you can meet a woman who'll give you a side quest. To save her lost son you have to defeat a group bandits east of her hut. The gang of kidnappers won't be a problem for your troops. You will receive a +1 protection ring for completing your task. This is a quite useful item for Arthas. Heroes are the only type of units that can carry and use the in-game items. 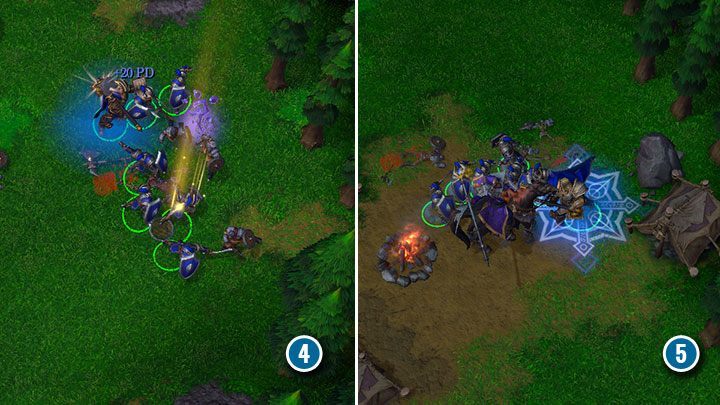 On your way you will come across several groups of bandits who are not challenging to Arthas and his infantry.

Near the main road, there's a man calling for help. It's an ambush - you'll confront a few bandits (4). Remember to bring Arthas into action once the enemies have focused on the infantry. If one of your soldiers loses at least half of their health points, cure them with Holy Light. It is worth improving this spell first. That way you can restore more health points.

On your way to the town, next to the bridge, you'll meet a buyer who was attacked by bandits. He will ask you to recover the stolen tome. It is worth attacking the bandits right away and block their escape route. This way you will confront a smaller group in their camp in the lower right corner of the map (5). The leader of the bandits is a mage, but he will soon die under the overwhelming might of your swords. Once you've delivered the lost book, you can use it to strengthen your hero. 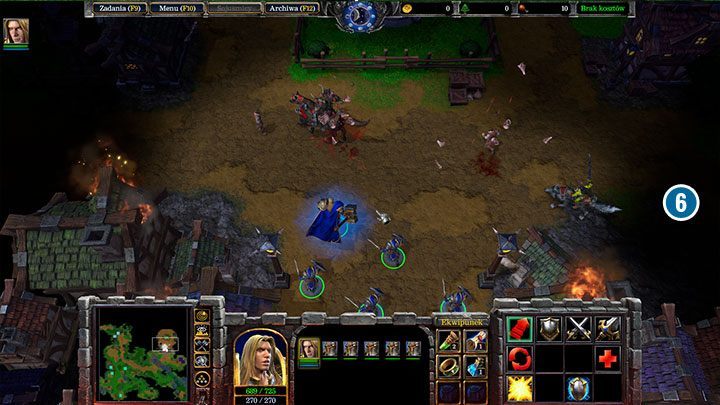 Strahnbrad was robbed and invaded by the Orcs. Follow the leader of the orcs. Kill him to complete the mission.

At the gates of the city (6), the bitter truth awaits you. The orcs attacked the city, burned it and plundered it. However, the objective of the mission is not to clear the city of all enemies, but to defeat the enemy leader and his guards. He is lurking in the city center, in the western part (7). You can start fighting Orcs in the rest of the city, but you only have to defeat the Slavemaster. Remember to heal the weakest soldiers. Only then you will defeat your enemies without any problem.