In this mission, Thrall has to gather the Horde and prepare the assembly point. This is an introduction to the basics of base building and army management. Luckily, you won't start with the total basics - the game provides some primary predefined resources that can be useful to expand your base. 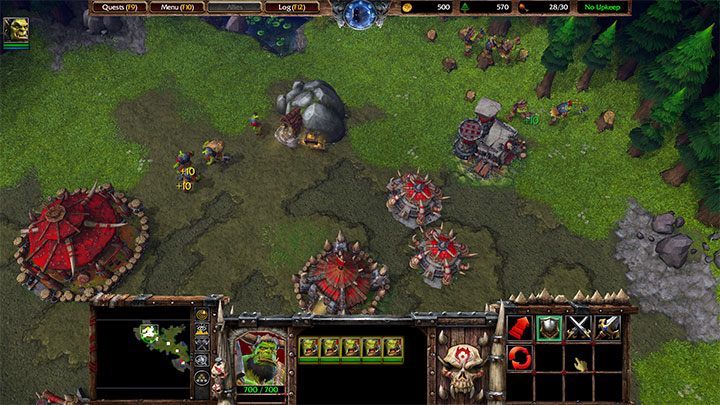 In each mission, start by strengthening the economy and ensuring a steady flow of gold and wood.

At the beginning the game will teach you how to gather gold and wood - these are the basic and only resources in the game. You need headquarters to do so - the Great Hall of the Orcs. Then, select your workers and right-click on the mine. The Peons will start mining and delivering gold to the Great Hall on their own. It's the same with extracting wood, but you can speed it up. It is enough to build a War Mill close to the forest to shorten the time of wood transportation. Instead of going to the Great Hall, the workers will carry wood to the new building. In addition, the War Mill is a structure which offers various technologies that can improve your units - you can, for example, increase the attack strength of Grunts or improve their armor.

The Burrow allows you to increase the food limit. Each unit has a fixed cost of upkeep in the form of food - without food, new units cannot be trained. Grunts need three food points, so build an extra burrow to train 5 Grunts and move on to the next stage of the mission. 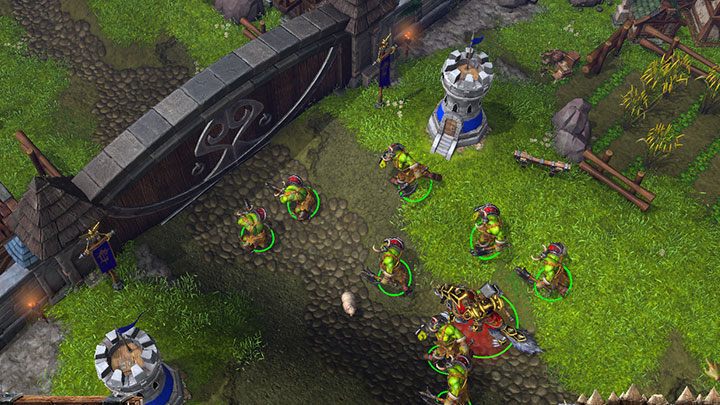 The gate blocks the way to the city - order your soldiers to attack the gate so it gets destroyed after a while.

Once all the mission objectives have been completed, you will receive a new task - to free Hellscream. Human race has rebuilt the bridge that separated you from the Alliance's city. They have captured numerous members of the Horde, including Hellscream. Gather your troops and repel an attack of the intruders who have invaded your fortifications at the bridge. The Thrall and the Five Grunts, which you've trained, will be enough for this stage of the mission. 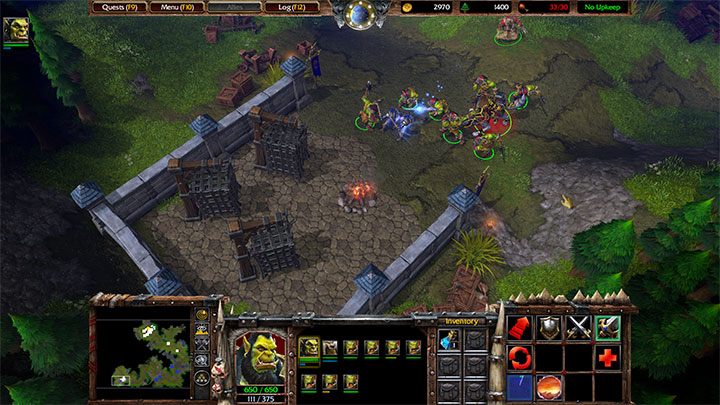 Every battle near the cages is an opportunity to gain additional warriors.

When you cross the river, you will encounter watchtowers that pose no threat to you. You can ignore them and move on westwards. Once you've breached the gate into the city, you'll meet individual enemy units. Footmen are the main units of humans, but they can't win in a 1-on-1 duel with Orc Grunts. You'll also come across the Dwarf Riflemen, who aren't tough but deal more damage. After each victorious battle, proceed to the cage - you will receive additional warriors. Your group will be extended by Shamans - ranged units, which can slow down the movement of enemy forces. This is a useful spell if you want to separate enemy units.

When you reach the next gate, you will have to confront human Knights - this is an improved version of Footmen. They have more health points, better armor and deal more damage. However, they don't stand a chance against your large group of Grunts. Once the gate has been destroyed, you must go to the Watchtowers. They have a high rate of attack speed, although they are not very powerful in terms of inflicted damage. Destroy Watchtowers in any order, but always attack only one building at a time to avoid unnecessary losses and accelerate destruction. Now you will free Hellscream and find out what the Horde is planning.