On this page of our guide to Void Bastards we have listed the best weapons and gadgets (this is of course our subjective ranking). These are the most damaging items of equipment as Void Bastards focuses on exploration and collecting the loot. 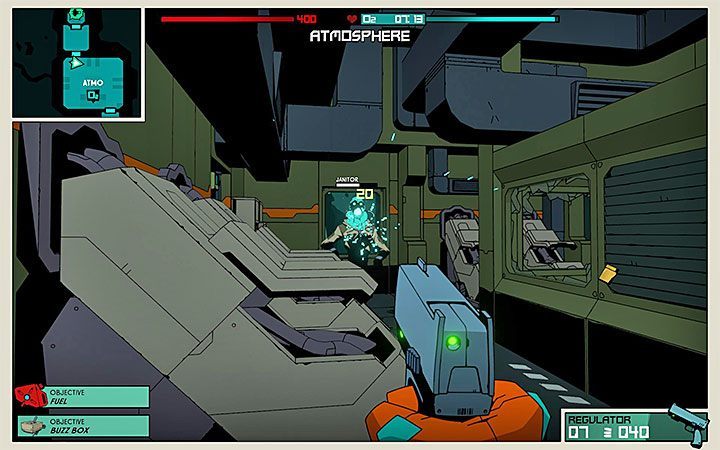 Regulator is the pistol with which you start playing by default. Contrary to appearances, it is not a weapon that becomes completely useless in the course of a campaign. You can, above all, improve and increase its damage (and raise other stats). A gun is also a great weapon for quickly destroying surveillance cameras. 1-2 shots should be enough to destroy the camera and if you do this quickly enough you will avoid the alarm. You don't have to worry about gun ammo, especially if you've unlocked the Bullet Hunter project. 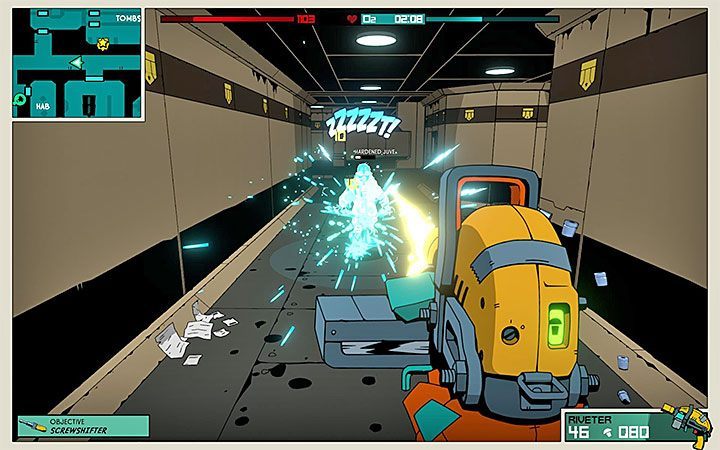 Riveter is a weapon distinguished by the fact that it can shoot a continuous series of bullets. You can use this to quickly weaken individual strong enemies, as well as to attack groups of weaker enemies. When using the Rivetera, however, you must remember that this weapon uses up its ammunition very quickly. You can "lose" up to hundreds of ammunition as a result of a single mission. You can try to reduce this problem in two ways - by purchasing the Rivet Hunter project (more frequent ammunition finding) and by taking the Riveter to the missions where it is most useful. 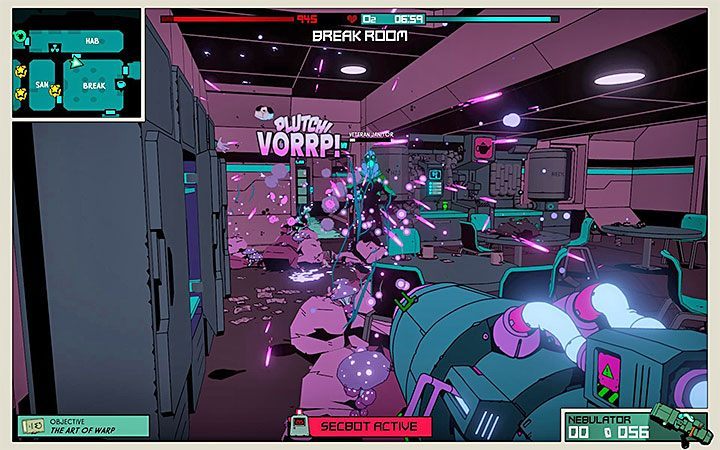 Nebulator fires explosive gas bullets and is the most powerful firearm available in the game. It is not surprising that the ammunition for this weapon is quite limited. The Nebula Hunter project is worth taking an interest in as it enables you to find ammunition in new locations. In general, we advise you to take this weapon with you only on missions where you meet stronger opponents. Nebulator will work well in attacking both single tough enemies and clusters of enemies. We are also talking about opponents from the Patients group, i.e. groups of flying heads. A single explosion can kill all heads and prevent you from eliminating them one by one. 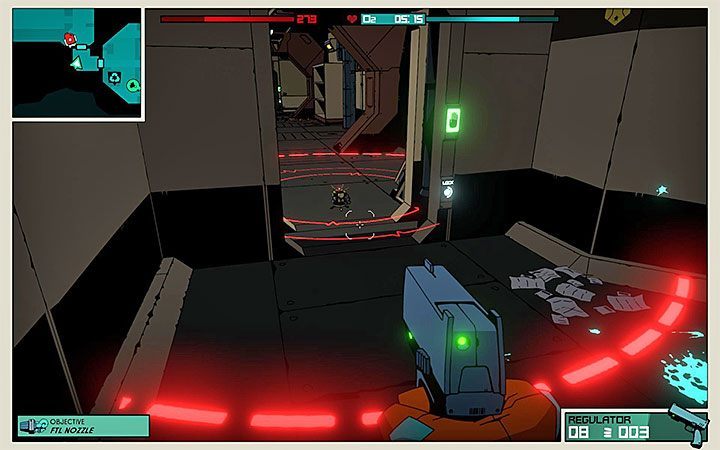 Bushwhacker will probably be the first gadget to be unlocked during the progress of the game, but similarly to the Regulator, it does not mean that it loses its importance later in the campaign. You can upgrade this gadget so that the explosive charge deals much more damage and in consequence hurts or kills more elite enemies. Bushwhacker is perfect as a trap. You can place it on a site where opponents will appear (for example, in the narrow passage) or drop it when you flee from enemies. An important feature of this gadget is that your character may not detonate the trap prematurely (by entering the red circle). It only reacts to enemies. 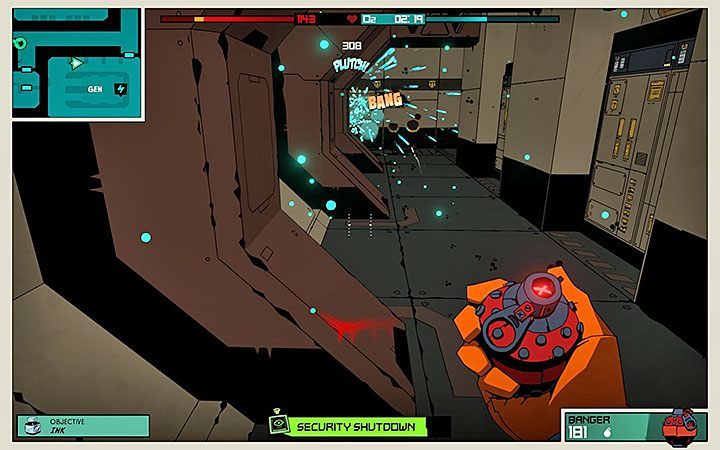 Banger is most reminiscent of traditional grenades. This gadget can bounce back after being thrown and as a result cover a greater distance before it finally explodes. We advise you to use this item alternately with Bushwhacker, so that you do not run out of stock of any of the gadgets. Banger should also be upgraded. This will allow the grenade to deal more damage and work well against stronger enemies. 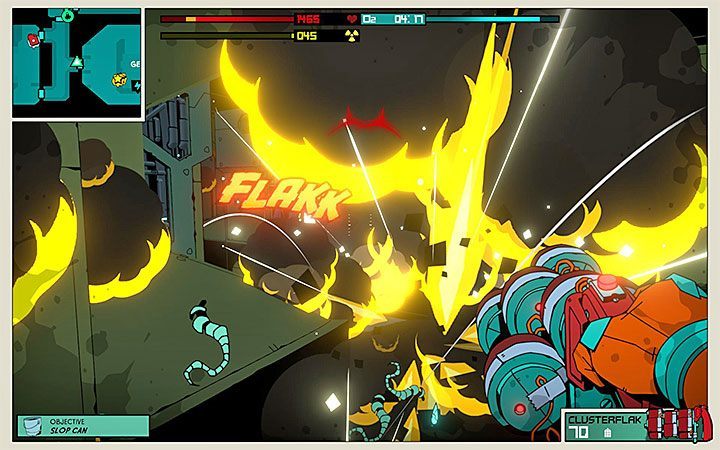 Clusterflack are cluster bombs. This is a powerful gadget, which requires skillful use of it during battles. It's ideal application is to throw it into a room where a group of enemies is staying. Cluster bombs explode with some delay and as a result it is not an ideal gadget for attacking fast-moving enemies. It is also important not to enter the area where a series of explosions is going to occur. Cluster bombs can also hurt your hero. Let them all activate. In the meantime, you can attack enemies from a distance or explore adjacent rooms. 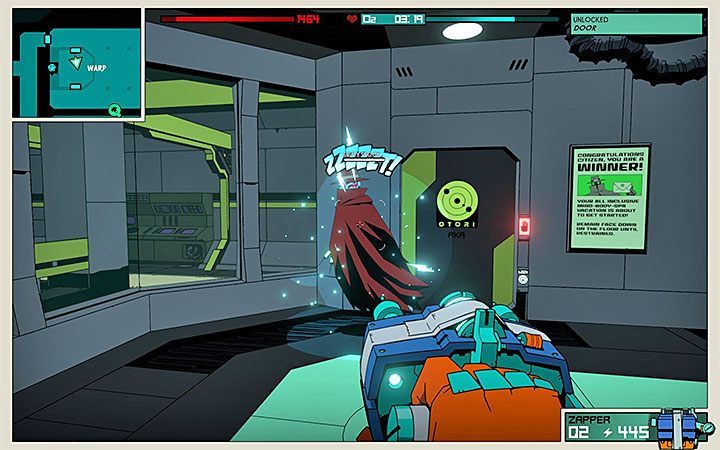 Zapper, in our opinion, is the most useful weapon in the whole game. This stun gun works well with your preferred Void Bastards gameplay style, which focuses not on defeating enemies, but on getting to the loot quickly and taking as many items as possible with you. The Zapper can be used primarily to stun and confuse most of the enemies you encounter, as well as the more elite ones of the following nebula depths. These weapon can also be used to temporarily sabotage turrets, robots and cameras. After each successful action, it is best to continue exploring and collecting the loot right away. Don't waste time or ammunition to get rid of your opponent or machine at any cost. Deviate from this rule only in rooms where you want to stay longer. In such situations you can get rid of a defenseless opponent or protection device. 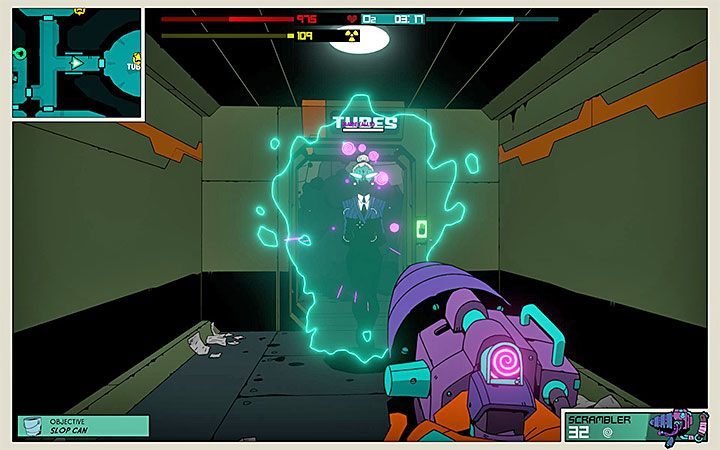 Scrambler is a great weapon for getting rid of uncomfortable opponents. The attacked enemy becomes a temporary ally of the controlled character. Not only will he temporarily stop attacking the hero, but he is be able to fight with his former vanguards. You can make it easier for yourself to eliminate enemy groups or simply distract them to pick up loot from the area. Scrambler only works on live opponents, but fortunately there are separate Gunpoint MGR and Secbot Manager projects for re-programming turrets and robots. Use Scrambler moderately or you will not be able to find huge amounts of explosives for this weapon.