On this page of our guide to Void Bastards, we've included a set of starting tips for beginners. We encourage you to read them before playing the game for the first time. Most of the described things have been discussed in more detail on the individual pages of our guide. 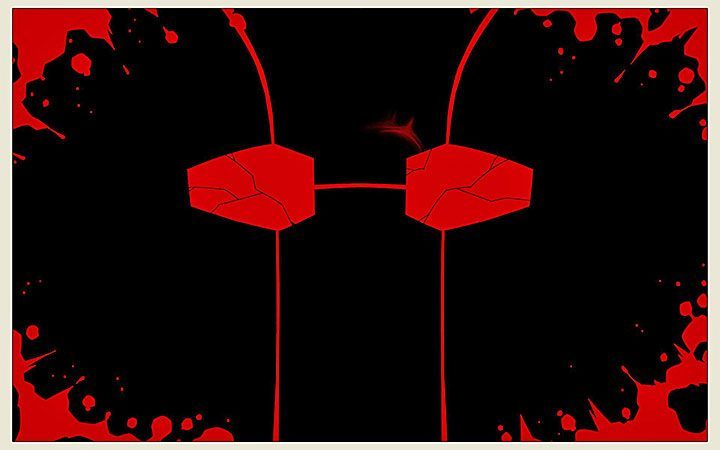 Choose a normal difficulty level to learn the game. This is the best setting, in our opinion, for knowing the mechanics of the game. Once you get to know it better and finish it, you can choose one of the higher difficulty levels. Also, you may choose the Ironman modifier, which ends the game after the first death.

Death in the beginning is inevitable. When you start the game for the first time you have to play the tutorial and explore the first ship. The hero does not have ammunition for the main weapon and cannot attack enemies. The death of the hero cannot be avoided. You are informed about this by one of the signatures that appear on the loading screen. 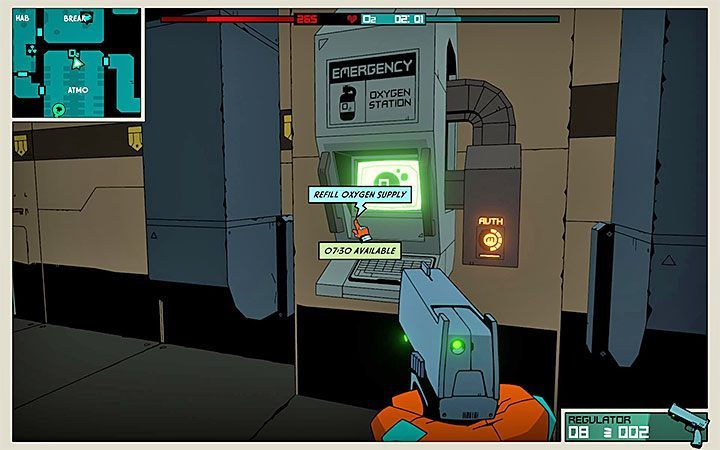 Run away from the ship when you have little health left. If you don't have Ironman mode ON, character death doesn't mean the end of the game. Despite that it's always worth striving to keep your hero alive. We advise to exit the airlock only after you will have around 100 health points. This, contrary to popular belief, is a quite small amount of health points that you can quickly lose. Especially, if you find a stronger opponent or tower.

Monitor your oxygen supply. The oxygen supply counter is displayed at the top of the screen. We advise you to watch it especially in the early stages of the game, because by default it only lasts for a little more than 7 minutes. Get to rooms with oxygen tanks (ATMO) to replenish oxygen reserves (example station shown in the image). In the future, the problem of oxygen supplies is not that important due to improvements and genes, which allows to increase the maximum supply of oxygen in the tanks. 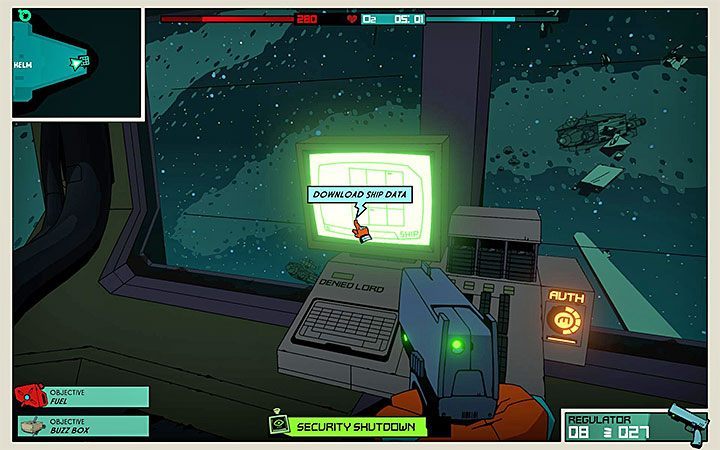 You don't have to fight all the opponents. Void Bastards is not a game in which killing opponents is compulsory. Moreover, getting rid of them is not particularly rewarded (they can leave a small loot). Also, they can respawn. It is better to focus on exploration and a quick search for treasures. Fight only with those enemies who obviously interfere during this process.

Quickly get to the bridge to find a map of the loot containers. Try to locate the bridge (HELMET) before entering the enemy ship. There's a computer there, and once you interact with it, you can detect a loot all over the ship (an example of such computer is shown in the attached image). Pay attention to the large stars that indicate a unique loot (for example, spare parts for crafting of new gadgets). Also, for an additional fee you may check the position of enemies, but do not spend credits on such service if you have a smaller amount of funds in stock. 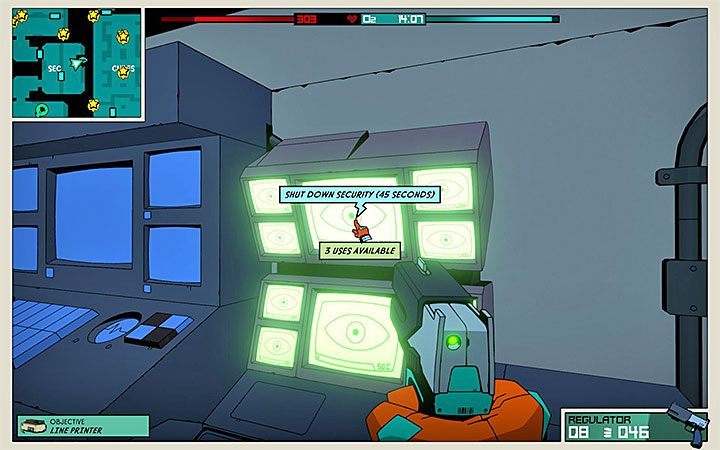 In the security room can sabotage the turrets and bots. You should always look around for security rooms (SEC). You can temporarily disable the local security systems (security position shown in the image) or pay with credits for a permanent sabotage. This second option is a good idea if you have to explore a large ship with several rooms in which there may be turrets and other protective systems.

The game can only be saved in between missions. After that, you can safely turn off the game. When you restart it, you automatically resume the game from the same place. If you exit the game while completing a mission (before returning to the airlock), this will be considered as instant death of the current character. After restarting the game you will take control of a new prisoner and have to break through the nebula starting next to the Ark. 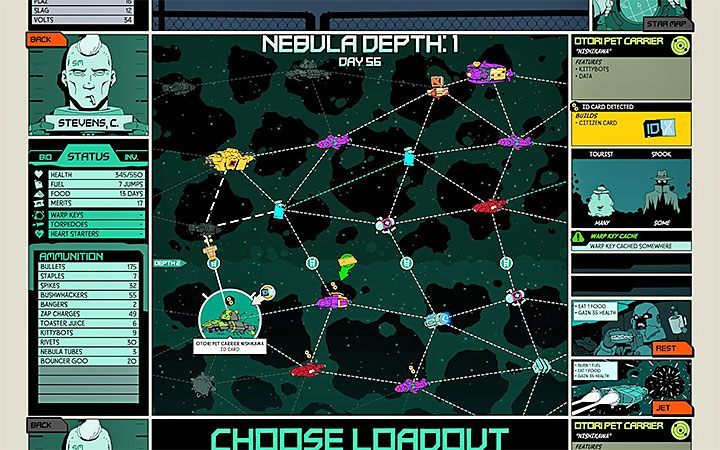 Heal the character before you get to a new place. Food is needed to restore lost health points - it can be found in the process of your ship exploration or you may buy it in stores. Try to get as much HP restored as possible before you start exploring another enemy location. Do not forget, however, to save some food in your inventory for the journey. Depletion of food reserves will cause the character to starve and lose health points.

Carefully read the location descriptions on the nebula map. The journey through the nebula is usually very non-linear, as you can choose different connections and reach different places. By selecting the site you can learn about possible rewards, opponents or other possible difficulties (for example, the need to restore power). Choose those sites that have the best loot, but don't select the ones with most difficult opponents. 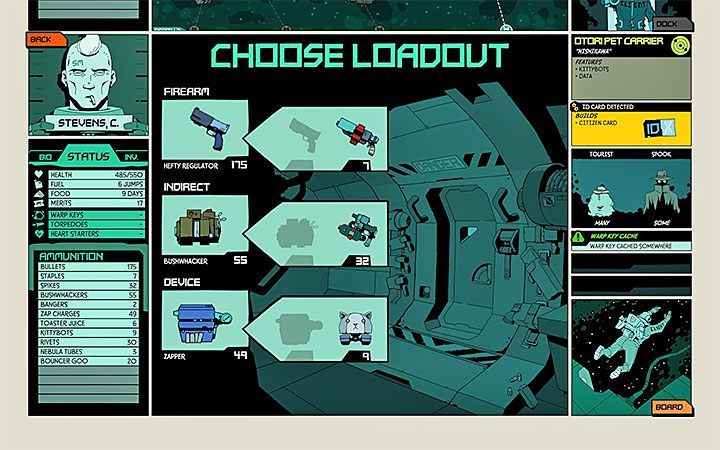 Don't take weapons with low ammo on missions. As you progress through the game you will gradually craft and unlock new weapons and gadgets. Try to choose those guns to which you have a large supply of ammunition, thereby reducing the risk of using all ammo. In the case of gadgets, you can adapt them to the specifics of the mission, for example it's worth to take Zapper on these missions, in which you fight with mechanical opponents.

Try to have at least 25 credits left in stock. This is the amount of credits required to open some closed cabinets in starting locations (hacking becomes progressively more expensive as the game progresses). These always contain some valuable items (for example, parts required to craft a weapon), and without enough credits you will pass your chance of obtaining some cool stuff. 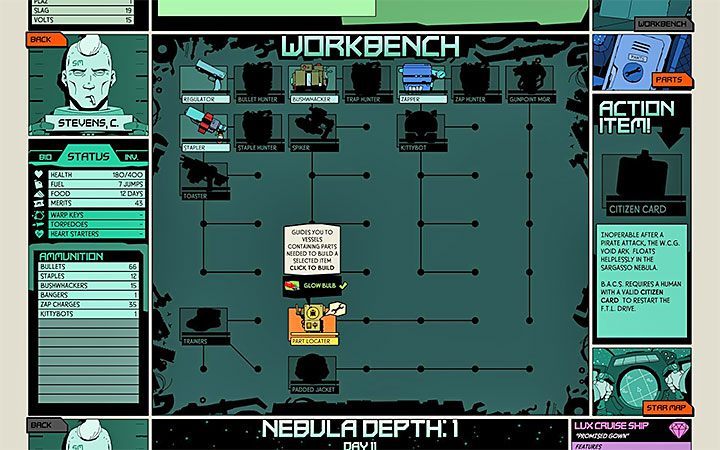 Unlock Part Locater blueprint as fast as you can and use it frequently. When you unlock this blueprint, you gain access to Locate Mode. Open it to mark projects that you haven't bought yet. After that, the parts required for crafting these projects will be marked on the nebula map. Thanks to that, you will have an easier time locating ships with important loot and unlock the most important weapon or stat bonus blueprints.

Marked containers aren't the only place where you can find loot. Reaching the captain's bridge will reveal all the containers to you. However, some loot can be found lying in plain sight - this loot isn't always marked. You should also check the remains of defeated enemies. Their corpses can contain useful items. 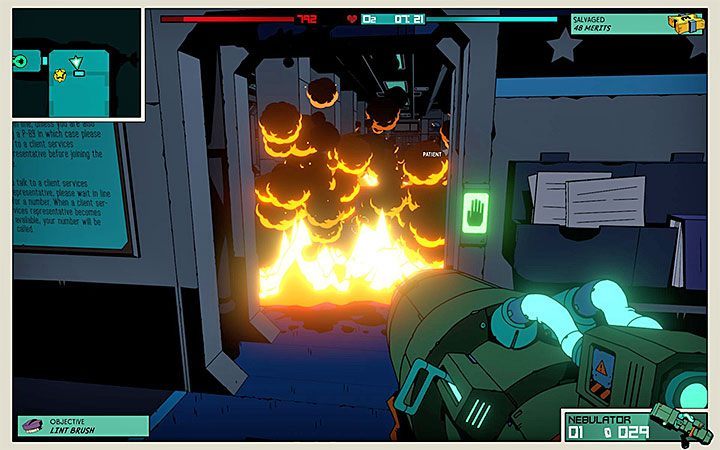 You don't have to visit every single location on the nebula map. The game doesn't force you to dock to every ship you have jumped to. If your character is weakened or the enemies on the ship are too strong, you can simply "jump" to another field. However, this isn't recommended since you will only waste your fuel. Try to plan your every move in advance. Use Warp Key as a last resort to "teleport" to any field on the map.

Watch out for fire and radiation. These two environmental threats can severely damage your character. Radiation builds up, and fire will start taking your health points immediately upon contact. If you have a burning tunnel or a large radioactive puddle (you can jump over small ones) in front of you, find another way. You can get rid of radiation (and other negative statuses) in Med Booths located in HAB rooms. 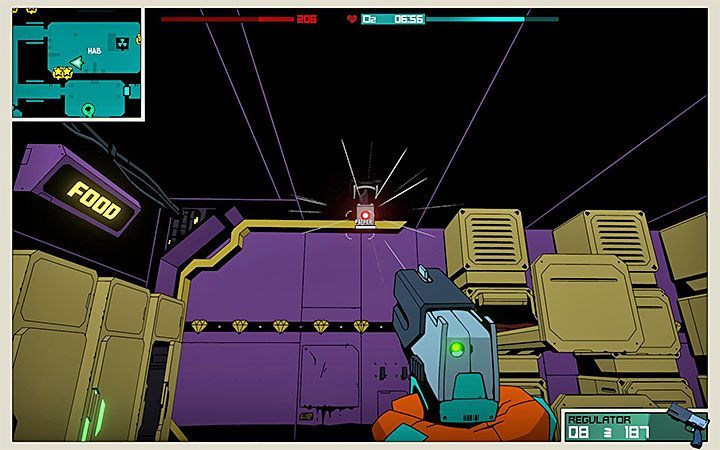 Destroy Peeper cameras as quickly as possible. They can be found on some ships in the later sections of the campaign. They are always attached to the ceiling and they make noises. If you don't destroy them fast enough, they will trigger the alarm. After that, a powerful Secobt will start "hunting" you. This enemy can be challenging and fighting with it can cost you a lot of supplies.

Avoid pirates and whales. They are visible on the map so you can track their movements and plan yours in advance. Try to visit places located far away from them. If you come into contact with pirates, one of the possible options is to face them on a ship. As for whales, they can eat your S.T.E.V. ship, killing your currently controlled prisoner. You can defend yourself by finding torpedoes. You can use them (automatically) to defeat pirates and whales. 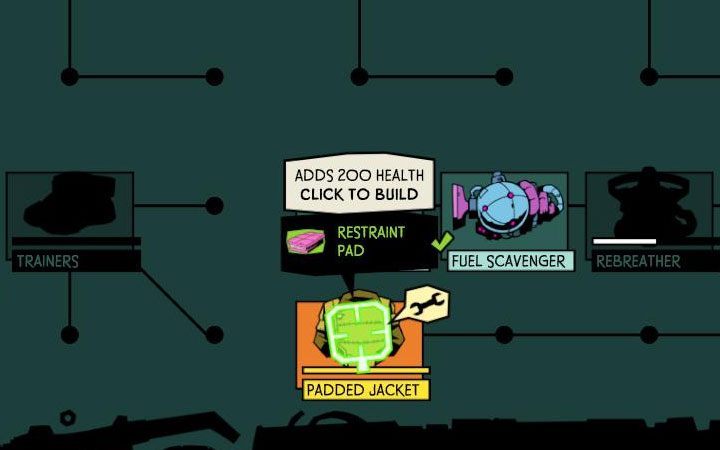 Running can alarm enemies. In Void Bastards, enemies don't know your exact location - they are hunting you right from the beginning of a mission. They can attack you if they see OR hear your character. Sprinting makes more noise - if you use it, prepare yourself to be defenseless against surprise attacks. If the enemies hear you, your character won't be able to sneak past them. However, carpets and other similar surfaces reduce the noise you are making while sprinting.

Get Padded Jacket and that are unlocked after it. This is one of the most useful blueprints in the early stages of the game. Once you get it (either by crafting or finding Restraint Pad item), you will increase your health permanently by 200 health points. Also, when you die, your next character will keep this bonus.