The unofficial guide to Void Bastards provides information about all game features and answers all the difficult questions. It's going to help you in solving potential problems that may arise during your gameplay. On the first pages we have prepared a detailed overview and key guidelines to Void Bastards. It describes all the basic elements and mechanics of the game, such as exploring the nebula, collecting loot, defeating opponents, crafting new items, inventory and supplies management or visiting enemy ships.

In our guide to Void Bastards, as usual, we have prepared a FAQ section with answers to frequently asked questions. It contains guidelines and tips, among other things, if it is possible to save the game, how to cure a controlled character, what happens after death of the hero, how to earn Warp Key, how to extend and increase the supply of oxygen, how to replenish ammunition, or how to find ingredients for crafting in much easier ways.

An important part of our guide is the chapter with the various summaries and lists. These contain tables and descriptions of unique locations on the map of the nebula, types of rooms on visited ships and their functions, best weapons and gadgets and the best crafting projects. Everything is concluded with a detailed trophy guide (including information on how to unlock every trophy and achievement) and sections that explain controls and system requirements.

Void Bastards is a game that combines several different genres. It includes elements characteristic of a FPS game with a combination of a roguelike-strategy game. During the game we travel on a spaceship through the nebula. You need to visit another hostile locations and get valuable loot from this places. Also, you have to avoid all their threats. The death of a controlled character does not necessarily mean the end of the game, as in the roguelike game model your main hero can be replaced by someone else. Some of the remaining loot will be permanently saved. It will be transferred to the next game.

In the FAQ - Frequently Asked Questions section, we have described a few important questions that may cause problems or might seem unclear. Some of game mechanics have been described in our walkthrough.

Our Game Guide with a comprehensive walkthrough accurately describe all the basic elements of Void Bastards. Thanks to the provided knowledge, you'll be able to better manage your supplies, as well as survive for much longer before your hero is going to be replaced by another prisoner.

Why can't I zoom in the camera while aiming? 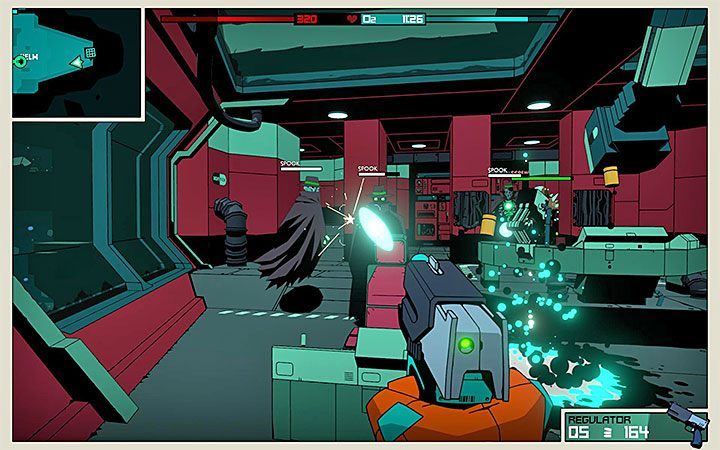 Unfortunately, Void Bastards does not offer options for accurate aiming or use of a scope by pressing a separate button. All shots are released from the hip. Remember this, especially when firing at more distant opponents. Due to the lack of image zooming options, it is easy to miss and waste ammo.

Why did the mini-map disappear? 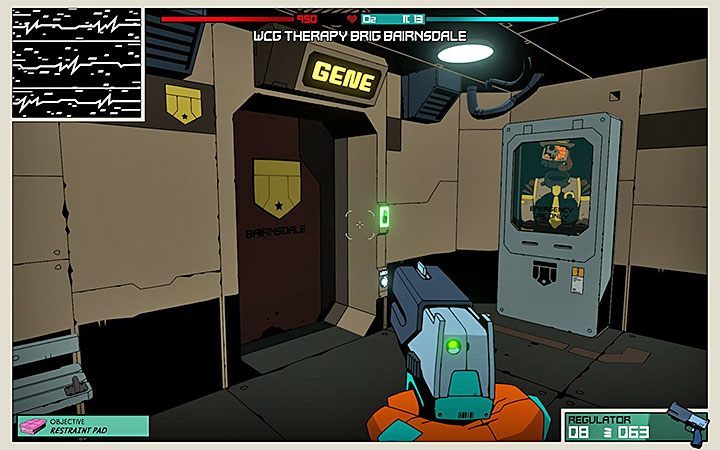 A disappearing mini-map can be caused by a unique trait of the location you are currently visiting (EM Static Field). You can't make your mini-map work again. Luckily, you are still able to see the full map.

The mini-map should work as usual when you move to the next ship.

Is smoke dangerous to my character? 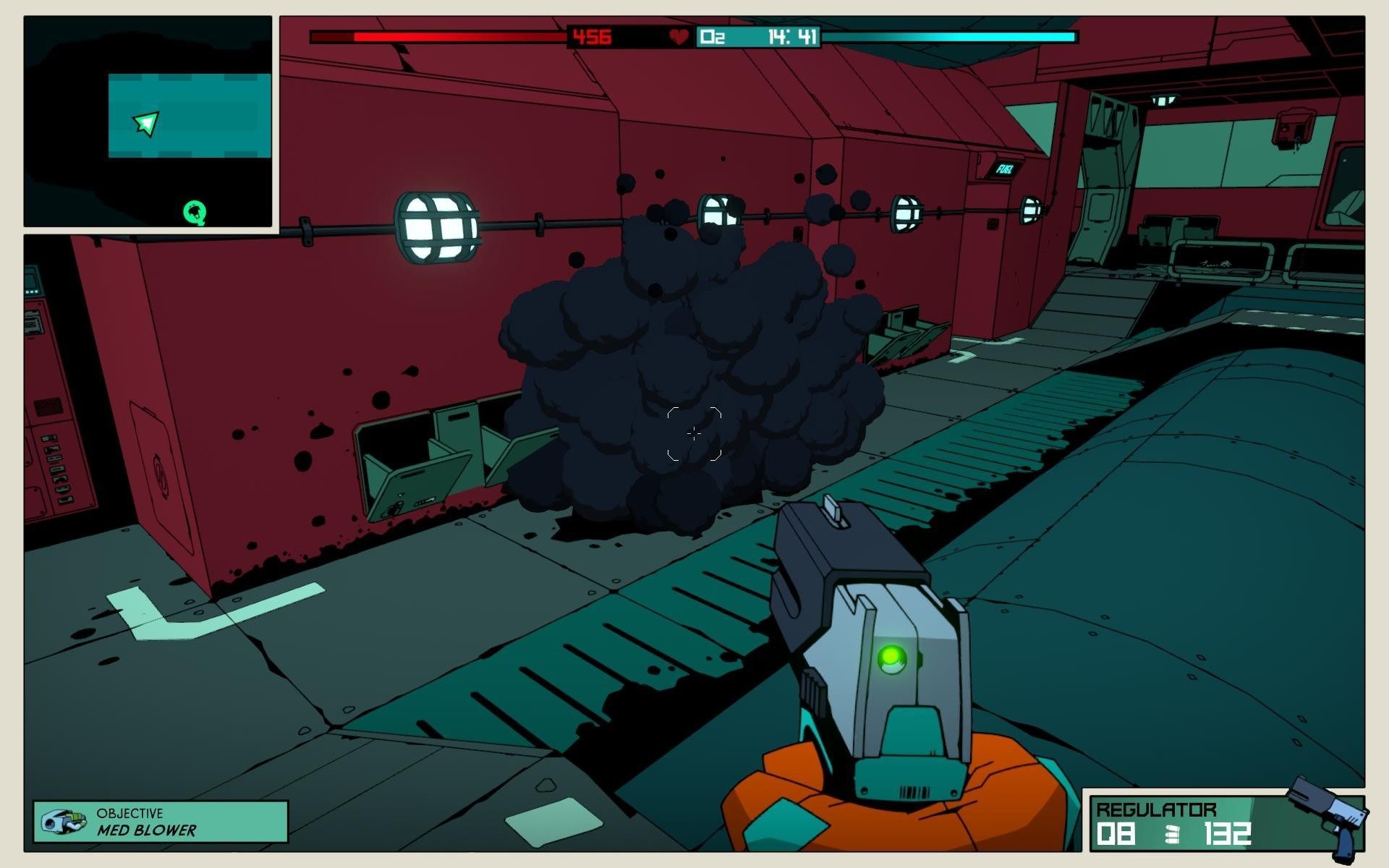 Yes and no. You don't receive any damage nor status ailments when you enter smoke. However, it is so thick that you won't be able to see anything around you. Your character becomes an easy target. It is also possible to get damaged by other threats (e.g. an area with high radiation). We recommend going around smoke or running through it fast.

Are the yellow puddles dangerous? 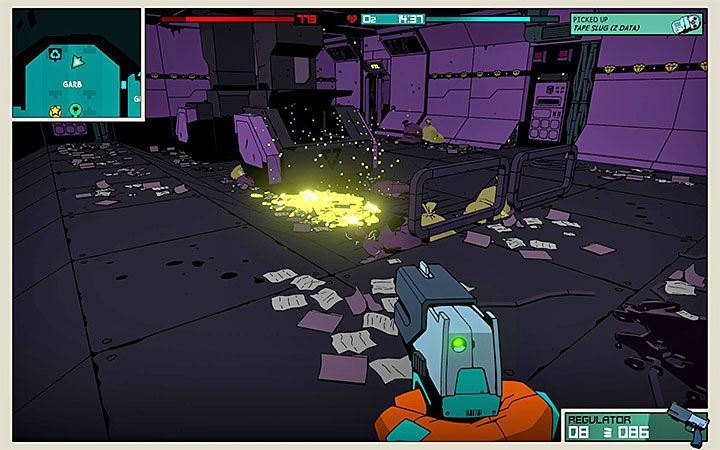 Yes, definitely. In Void Bastards, yellow is used for places with radiation. Every contact with them increases your radiation level. You can get rid of this negative status by visiting a station in HAB room or by completing a mission.

What will happen when I fly through a wormhole? 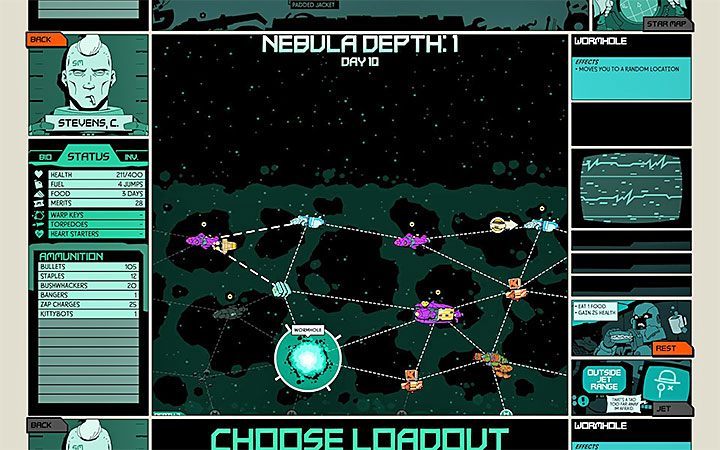 Wormholes can be found during exploration of a nebula. Don't worry - interacting with a Wormhole won't kill your character nor give you any penalties. A Wormhole will move your S.T.E.V. ship to a random place on the map.

How to unlock Ironman mode? 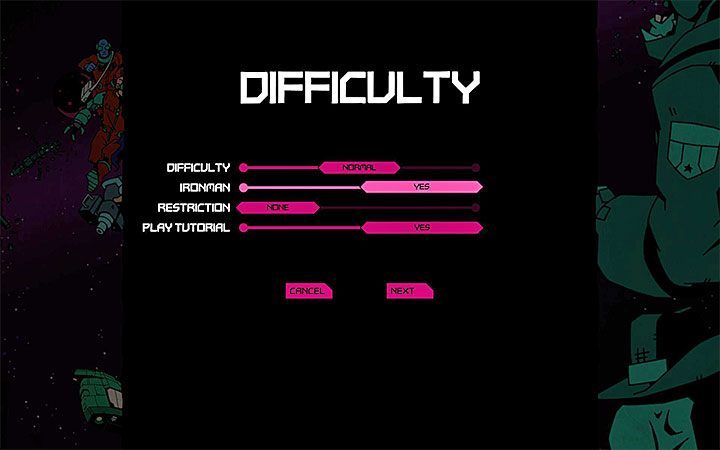 Ironman mode works in Void Bastards in a very similar way as in XCOM series games or roguelike productions - the death of the controlled character ends the current game without the possibility of resuming it. The exception is when you have a Heart Starter that can bring your character back to life.

When you start the game for the first time, you cannot select Ironman mode. This is not a bug, but a deliberate action to encourage you to get to know the game better before selecting "extreme" difficulty level settings. You have to complete the campaign and you can do it at any level of difficulty. After viewing the final video and returning to the Main Menu, select start a new campaign. This time the Ironman mode switch will be available. The same applies to the activation of modifiers (limiters), for example, starting a game with a defenseless character.

Below we have provided a list of the main PC controls and key bindings for Void Bastards. In the Controls section of our guide you will find full list of key bindings. You'll also find information about Controls for your Xbox controller here.

Does Void Bastards has a high system requirements?

No, Void Bastards has very low system requirements. We have described them below. Full details regarding this topic can be found in the System Requirements section of our guide. We have also included information about our gaming experience and available graphics settings.

About Void Bastards Guide and Tips 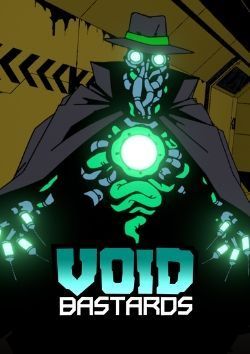 Void Bastards is a hybrid of FPS and strategy. We command a gang of prisoners who have to break through a nebula full of shipwrecks.

Void Bastards is a science fiction first-person shooter enriched with strategic elements. The project was developed by Blue Manchu studio, the developers of a critically acclaimed Card Hunter. The development team consisted of people who played key roles in the production of such titles as System Shock 2 or BioShock.

The action of the game takes place in the distant future. The player takes command of a bunch of prisoners who have to find a way to escape from a galactic prison and then break through the Sargasso nebula, densely filled with drifting spaceship wrecks.

Void Bastards is a hybrid genre in which the gameplay is divided into two segments. In strategic mode, we manage subordinates and stocks of food, fuel, and other materials, as well as decide where to go in the nebula. The space void is patrolled by space whales and pirates, so in the initial stages of the game it is necessary to avoid contact with these threats.

The exploration of ships takes place in the form known from first person shooters. In addition to combat, the collection of objects and the manipulation of unit systems play an important role. The game also offers a lot of freedom in the gameplay. For example, we can break through mechanical safety systems or try to activate the onboard computer, which will turn them off.

Collected objects are used to craft weapons and various useful gadgets. An additional attraction is a rich gallery of prisoners with unique personalities and gadgets. The death of each of them is permanent, but the fallen hero is replaced by a new one, and we do not lose progress in the crafting system.