This page contains a detailed description of two more complicated achievements in Vampyr - Just Take a Bite and Merciful Release. Both of them can be unlocked at the beginning of the game although they are mutually exclusive. Besides the requirements, you can also read our hints for PC and PS4 versions of the game that will allow you to unlock this trophy without playing the game for the second time.

The scene tied to the trophies 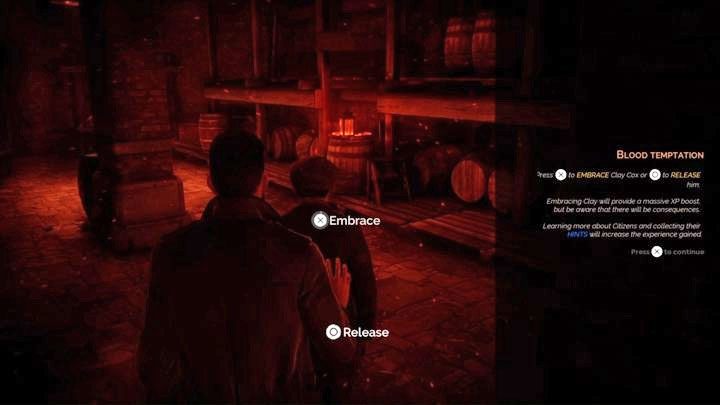 Both of the aforementioned trophies are tied to the same scene - the first meeting with Clay Cox which takes place during the first chapter. Clay can be found shortly after the boat ride with Dr. Swansea.

Get off the boat and head towards fighting men. The screen starts to pulse in red which indicates Jonathan's bloodlust. Speak with Clay Cox and then hypnotize him.

Follow the blood trail to reach a secluded place. The game now informs you about making a choice (this moment is presented in the picture above).

To get Just Take a Bite trophy you have to decide to suck Clay Cox's blood which can be done by choosing Embrace option. NOTE - This action blocks you from getting "Not Even Once" trophy which requires you to beat the game without drinking the innocents' blood.

To get Merciful Release trophy you have to decide to release Clay Cox without drinking his blood by choosing Release option.

How to get both of these achievements in one playthrough?

Sadly, both of these achievements are mutually exclusive. This can be solved by "cheating" the game (manipulating auto saves). This can only be done on PC and PS4 versions, the Xbox One version doesn't allow you to do anything with saves.