In this chapter of our guide, you can find out if Valorant is available on the popular tournament platform - Faceit.

Faceit is an extremely popular tournament platform, which is used by such titles like Counter Strike Global Offensive, Dota 2, League of Legends. All owners of a Faceit account can add the appropriate games to their library, then play matches in the league and win additional prizes, which are only available for premium users. After the release of Valorant, many players wonder if this tactical shooter will appear on the Faceit platform, and we answer that question!

Is Valorant available on Faceit?

Faceit's biggest advantage is the lack of cheaters, the lack of lags and 128-tick servers, which is why this tournament platform is so popular. The question now is whether Faceit will be a suitable and attractive platform for players of the latest tactical shooter such as Valorant? That is because Riot Games has already offered players a special anti-cheater security system (Riot Vanguard), low pings and 128-tick servers. 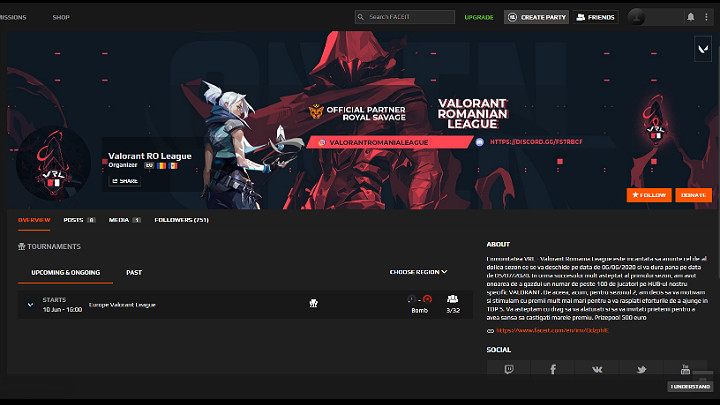 So far, you can't add Valorant to your library on Faceit. However, this may change in the nearest future. Interestingly enough, everything seems to indicate that Faceit already has a kind of centre for players from Romania and Brazil and the next games are scheduled for June 10, 2020. The prize pool for players from the Romanian community of Valorant is going to be €500 - TOP 5 players will be awarded with a reward.