By reading this chapter of our guide you can find important information about all callouts available on the Bind map in Valorant. Also, you can learn more about key locations for the attacking team and the defending team.

Bind is a unique map in Valorant because it is the only map that has portals. The latter allow players to quickly move from point A to spot B. There are two Spike planting sites on Bind map which can be accessed through narrow passages - these are crucial for both the attacking and defending team.

If you are playing the role of a defender at point A on the Bind map, it is best to take a position that allows you to observe the site from many angles and provide protection or possibility to move to another point if necessary. Below we have described some of the best defensive spots available on the Bind map at Spike A planting site in Valorant.

A Tower (or Heaven) is one of the best defensive locations on the Bind map. From here, player can observe two most popular routes of attack and, if necessary, quickly take action or inform the team of the opponent's movement. The A Tower (Heaven) also provides some solid cover and protection. 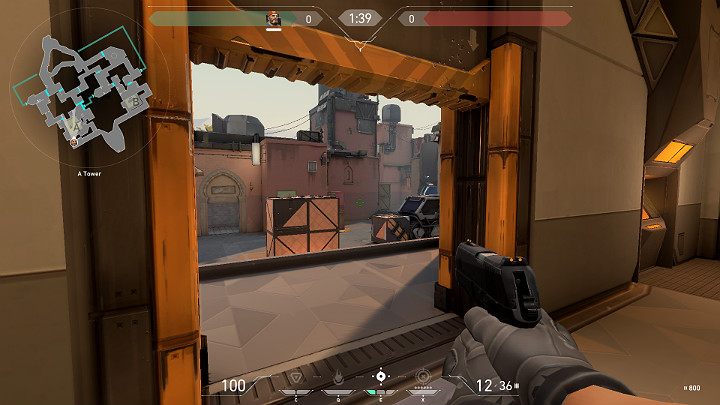 The screenshot above shows a character standing at A Tower (Heaven). From that point, you can observe two critical points of A Site, such as Bath (Showers) and A Short. If necessary, you can react quickly to an opponent's move and open fire or hide behind a wall and wait for team support.

While standing at A Site you can choose two defensive spots. One is behind the vehicle that will provide you with protection from A Short, and the other is behind the crates in the middle of the square. 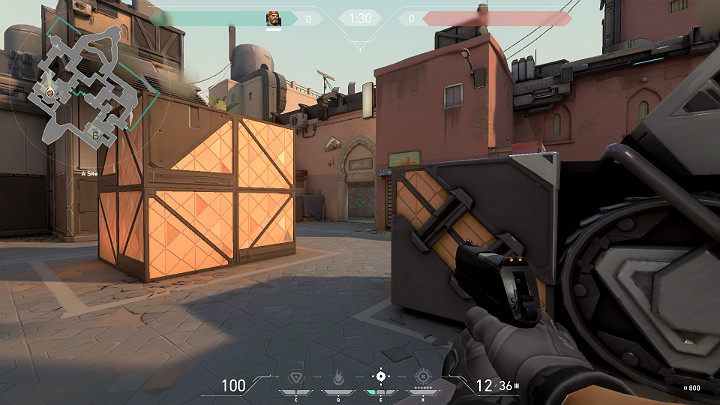 In the picture above you can see a character who hid behind an armored vehicle to protect himself from a potential attack from A Short. The player looks straight at the exit from Bath (Showers). On the left side you can notice the aforementioned crates - by moving to this position you can keep an eye on Bath (Showers) exit and A Short spot.

And Lamps is another popular spot on the Bind map for a defender. Unlike the crates visible in front of the character, which can be shot through, the A Lamps position provides solid protection in the form of the portal's wall. From there, the player can keep an eye on A Short and, after clinging to the wall, can aim at the exit from Bath (Showers). 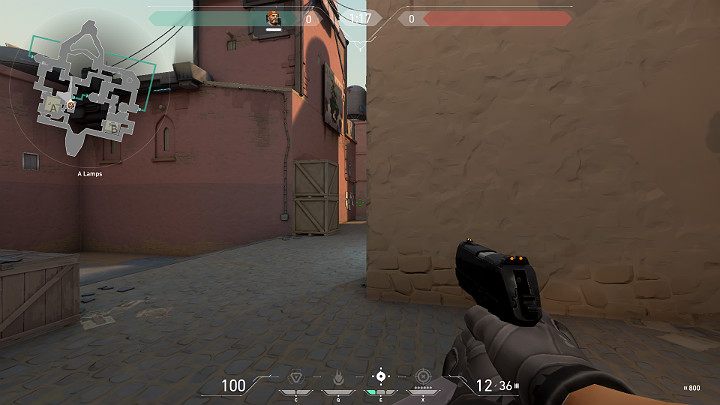 The image above shows a character aiming in the direction of A Short passage. If necessary, that player can quickly open fire or hide behind the solid wall. If opponents attack from the Bath (Showers) side, the player may turn to the left or go through the corridor behind their back to quickly reach A Site.

To reach the Spike A planting point on the Bind map, the attacking team can choose from two main paths: Bath (Showers) and A Short. Any movement towards point A will require good planning and the use of several skills, such as blinding, smokescreen or walls. When attacking, it is important to keep in mind that players defending access to Point A are already well positioned and can aim in the direction from which the opponent may arrive.

Bath (Showers) is one of the paths on the Bind map that attackers can get to Spike A. Unfortunately, Bath (Showers) can become a deadly trap for the attacking team if they are locked in a tight corridor with a few skills. In this case, Brimstone's singe ulti or Raze's grenade can quickly eliminate the entire team. 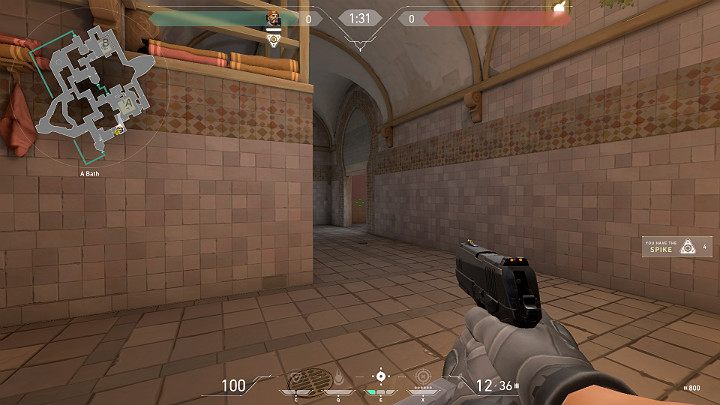 If you are attacking point A from Bath (Showers) direction, make sure there are no opponents in the corridor. When entering the corridor, you must first pay attention to the recess on the right, the same one where the player presented in the picture stands. Next, check the corridor on the left. Before you go to point A, use smokescreens, blinding skills or walls to protect you from the defenders located in A Tower (Heaven) and A Lamps.

A Short is another path on the Bind map leading to Spike A planting point. Unlike the previously described path leading from the Bath (Showers) direction, A Short gives attackers slightly more space and covers like walls and boxes. 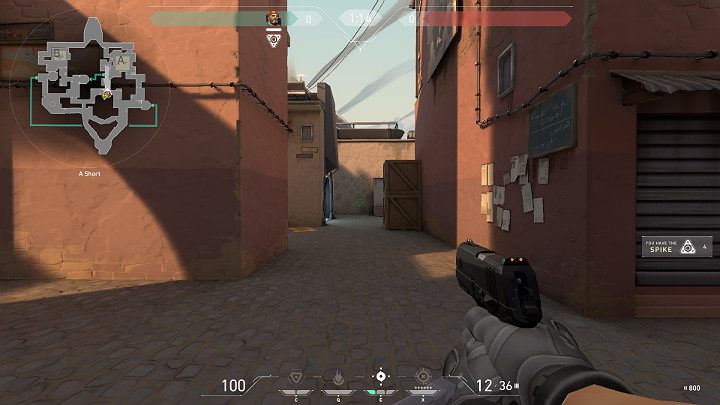 When attacking point A from A Short's direction, pay attention to players located in A Lamps (behind the portal), behind the boxes on the right, and those who are definitely aiming from A Tower (Heaven). It is best to use a smokescreen behind the portal on the left to force a potential defender to wait or move to A Site and then to obscure the visibility of players located in Heaven and A Site. A popular tactic when attacking from this position is to use Sage's wall in order to stand on crates - you can take a convenient shooting position there and keep an eye on the defender waiting for enemies at A Site behind an armored vehicle.

If you are playing the role of a defender at point B on the Bind map, it is best to take a position that allows you to observe the site from many angles and provide protection or possibility to move to another point if necessary. Below we have described some of the best defensive spots available on the Bind map at Spike B planting site in Valorant.

B Hall is an extremely popular location for players defending access to Spike B planting point on Bind. This location provides the player with solid protection and allows them to react quickly when a potential opponent appears in the window. 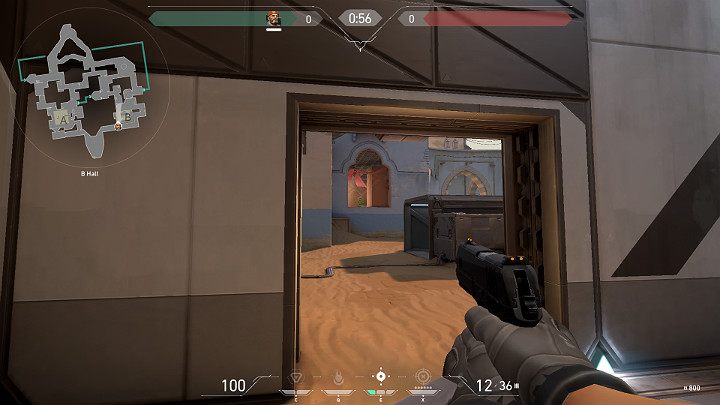 The picture above shows an exemplary position in the B Hall where the player has a good view of the B Window - one of the most popular ways to attack point B. The container in the middle of Point B serves as protection against players coming from the B Long. If necessary, the player can open fire, hide behind the wall, or walk down the corridor to the right and take position on the B Elbow.

B Elbow is another good defensive spot in point B. You can observe the B Window and keep an eye on opponents who can storm point B from the B Long (B Teleport) side. 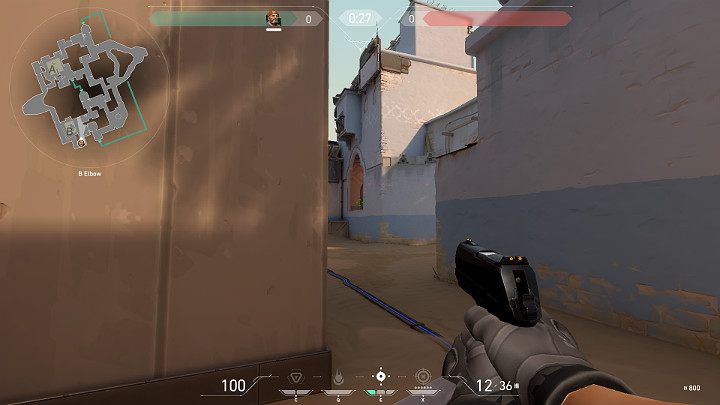 The image above shows the player taking a position on B Elbow. From there, they can observe the B Window and the passage to the B Teleport. They can also walk down the corridor to B Hall if necessary.

B Site is another defensive site on point B. You can keep an eye on the B Long. Also, by positioning yourself in the loading area, you can observe players coming out of B Window. 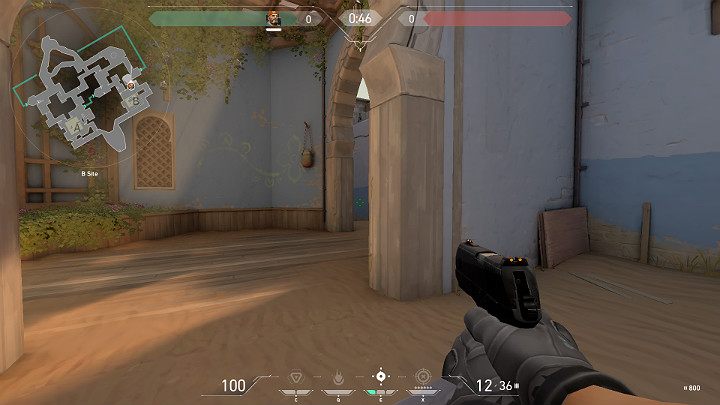 The player in the picture above took a position on the B Site from where they can observe the passage leading to the B Long. If necessary, they can open fire or hide behind a wall. By standing in the corner on the right side they can turn towards the B Window while remaining out of sight of opponents who may come out from the B Long.

B Long (B Teleport)

B Long (B Teleport) is a great offensive position from which a defender can shoot down opponents coming from their respawn point. You can see opponents when they are near the fountain. 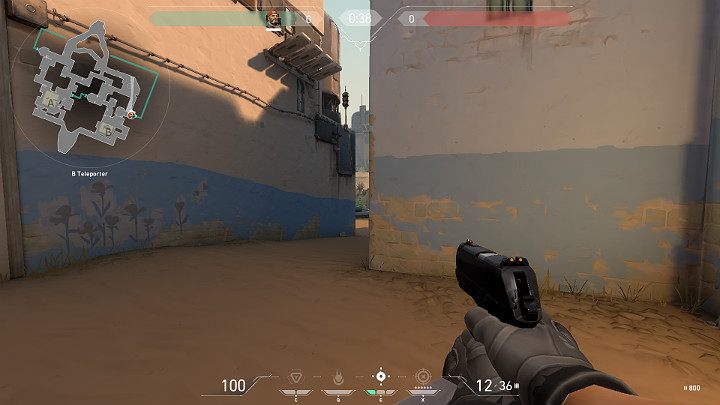 In the image above, the player takes a position at the teleport from where they can watch opponents coming from B Long. It is a very popular spot for snipers who can eliminate an inattentive target in a split second.

The attacking team can choose from two main routes to enter Spike B planting point on Bind: B Short (B Window) and B Long. Any action on point B will require good organization and the use of several skills, such as blinding, smokescreens or walls. When attacking, it is important to keep in mind that players defending access to Point A are already well positioned and can aim in the direction from which the opponent may arrive.

B Short (B Window) is one of the paths available to the attackers storming point B. Unfortunately, this path exposes the player to the attacks from Side B Hall or players hiding behind the container in the middle of the square. One well-placed wall by Sage can completely trap the attacking team in a tight passage and force them to make an error or choose a different attack path. 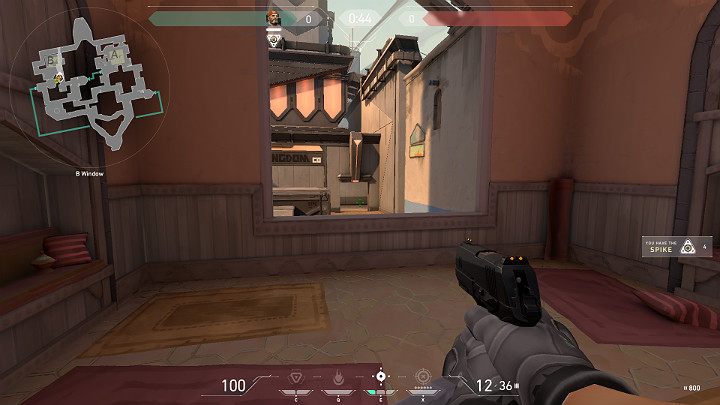 When attacking point B from the B Window, you should first pay attention to whether someone is lurking in the passage leading from B Short to B Window. Next, check the B Hall position and the recess on the right. In the next step, check the B Elbow position. Blinding skills and any kind of smokescreen or area skills will of course be extremely useful during the attack on point B.

B Long is another path leading to Spike B planting point on Bind. The attackers have more space here thanks to the large square with a fountain. If necessary, the attacking team can stop leading an attack using B Long and quickly move on to B Short. 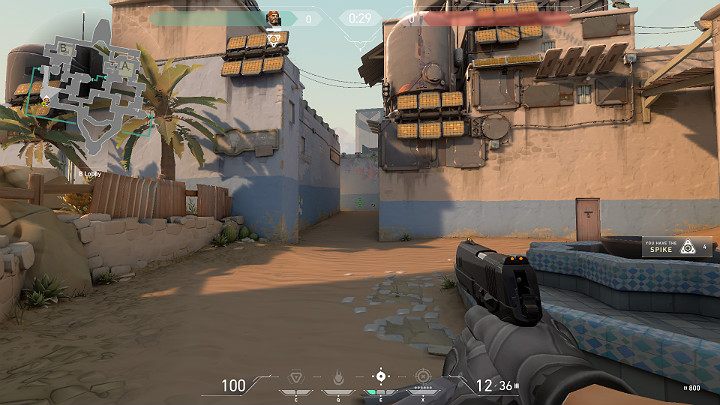 When attacking from B Long, you have to be sure that no opponent lurks behind the wall from the teleport's side or in the passageway on the right. These are two extremely popular positions for snipers that are worth covering up with skills like smoke grenades. When entering Point B from Side B Long, look out for opponents standing on the left (B Elbow) and in the window (B Window). Players defending from the B Hall's direction are covered by a container and don't have good visibility on the B Long so they must stand in the middle of the square.