This chapter of the Valorant guide focuses on how to spend the credits earned during the gameplay. It has information on purchasing skills and weapons, purchases for allies, and details on the pistol round, economy round, and shopping round.

The proper management of credits (the in-game currency) is very important in Valorant. Each player, regardless of which side they are on (attacking or defending), starts the game with the same amount of credits (800) and a starting handgun. From that point on, each player manages his or her finances individually. Each round in Valorant begins with a shopping phase and players have a certain amount of time to purchase weapons and additional armor. Credits can be obtained in many ways, such as passive income at the end of round, additional credits for kills, planting or disarming Spike. Skillful credit management is one of the important tactical skills in Valorant.

Each character in Valorant starts the game with one basic skill. The remaining two skills can be purchased during the game for the right amount of credits. 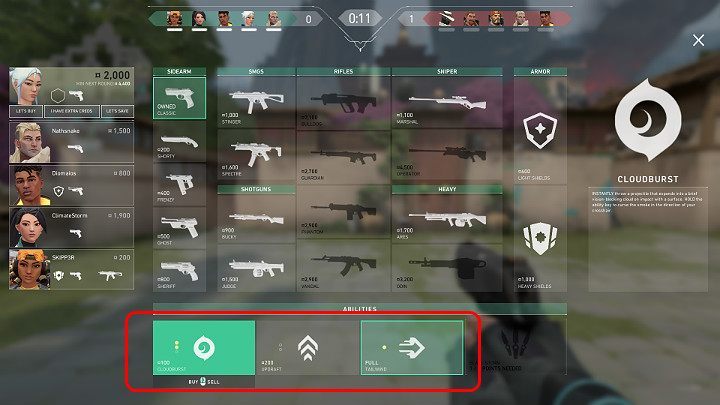 The first round in Valorant is very important because winning it allows you to have control over at least the next few rounds. Each player starts with 800 credits and can save them for the next round or spend them on, for example:

In this round, players don't buy anything or invest very small resources so that in the next round they can spend more credits on better weapons. Of course, the economy round cannot be written off immediately. Try to kill your opponent with the pistol and take their weapon. If you are playing as the attacking side, you can plant a Spike to get extra credits. Even if you lose a round, the whole team will get an extra reward. During the economic round, it is worth remembering a few rules:

A shopping round is characterized by investing a large amount of credits, sometimes even spending everything to get the right weapons and armor to win the next few rounds. The shopping round can also be divided accordingly to the current situation:

Shopping for an ally

Players in Valorant can purchase equipment directly for another team member - there is no need to buy weapons and throw them to the ground, as in the case of Counter Strike Global Offensive. Those who want to support the team can choose the appropriate option in the store and ask others to purchase the necessary weapons. 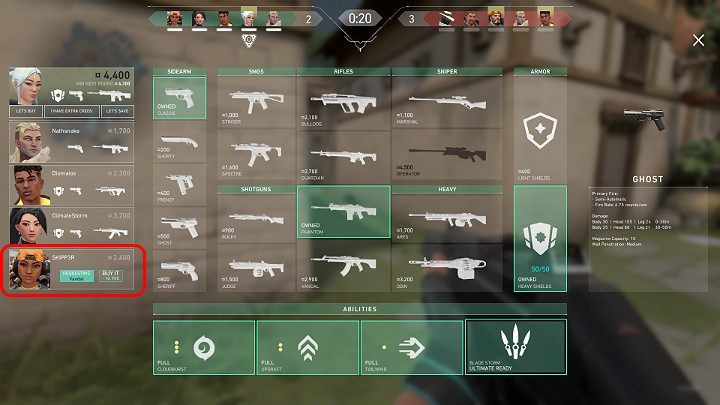 If one of the players asks to purchase a weapon, their character will say a specific line, making it easy to recognize that someone needs a weapon. The player with enough credits can buy the equipment chosen by the ally and automatically transfer the weapon.

Final round of the half

The final round of the half is the point where you have to spend all your credits, as they will be lost after switching sides. Don't hesitate to buy heavy armor, main weapons, a better sidearm and all skill charges. Anything can come in handy in a fight. 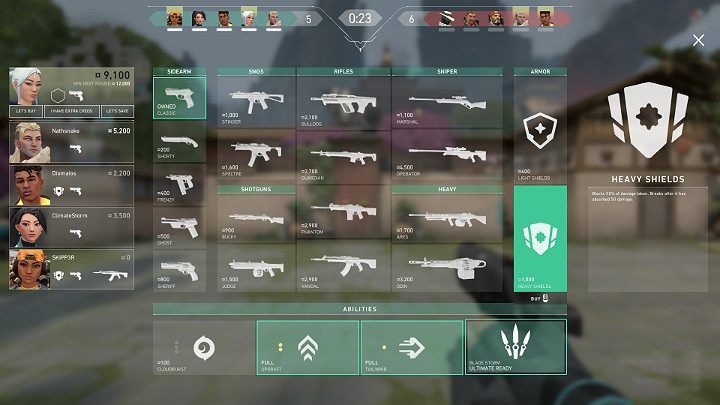 If you have a lot of credits left after shopping, let the team know by using the command available in the left side of the shopping menu or say it in a voice chat. There will always be someone willing to use that help.