Valorant is not a typical FPS game, as, in addition to firearms, players can use special skills that can be divided into offensive, defensive, and recon. Also, Valorant uses additional innovative mechanics, namely special portals that players can use to move from Point A to point B. This chapter of the Valorant game guide describes what these portals are and how they work. Players can learn some unusual usages of portals that can be used in thegame.

There are 3 maps available in Valorant so far: Haven, Blind and Split, but only one of them has portals - Blind. The rest of the maps have other features, such as 3 Spike locations. Before starting the game, it is important to know the mechanics of portals well and use them to move quickly on the map. This chapter describes how Valorant portals work and gives you a few tips that allow the player to surprise the opponent's team.

How do Valorant portals work

The portals in Valorant are currently only available on the Blind map and allow players to move quickly around it. The first of these is located in the middle of the map and allows a quick transition from the location of Spike to the so-called. short B that leads to a balcony window overlooking point B. The second portal is located at the long B and leads to the other side of the map - the exit is near the respawn point of the attacking team, the so-called. Lobby A, from where you can get to the short A and the Bath. 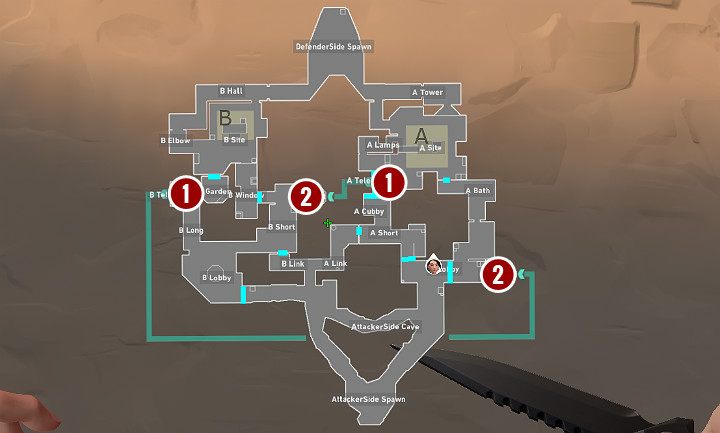 In the image above, the number 1 indicates the entrance to the portals and the number 2 indicates the exit. As can be seen, the first teleport in the middle of the map is very short, and the second goes through the entire map. It is worth noting here that the using portals comes at a price. Yes, they allow you to move quickly from one point to another...

Road of no return

After passing through a portal in Valorant, you will appear in a small room with only one exit (it can only be opened from the inside). There is no possibility of returning the same way so the player is forced to only go forward. The doors will open when the player approaches them at a reasonable distance and will close automatically after a few seconds if no one is standing near them. It can also happen that the exit from the portal is blocked and the player is trapped inside a cramped room. 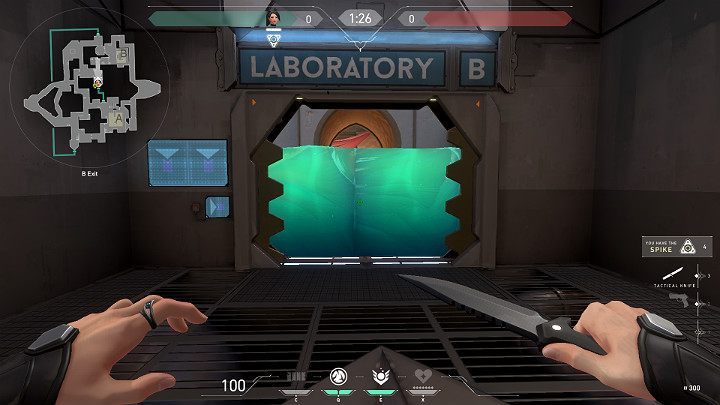 In the image above you can see a situation where the exit from the portal has been barricaded with a Sage barrier ball. The player is trapped inside and is vulnerable to attack because there is a gap between the wall and the top of the door through which the opponent can throw grenades inside or use area skills. The player, wanting to leave the room, must break the Sage or wait for the effect to pass.

Passing through the portal makes a very loud and distinctive sound, which is perfectly audible throughout the map. What's more, opening the exit door from the portal also makes an extremely loud sound so that the opponent's team can quickly realize that someone has just used teleportation. When using portals in Valorant , you should always keep in mind that there may be a welcoming committee or other unpleasant surprise waiting for you on the other side of the door.

As previously explained, portals in Valorant are used to move quickly from point A to point B, but also have some limitations and negative features, such as loud sound and a single exit. However, portals in Valorant can be used in a completely unusual way, and with a brilliant effect! Characters' skills such as bombs, grenades, bullets, drones or arrows can be sent straight through the portal and appear on the other side, activating their effect.

Grenades, rockets and other launchers

The portals in Valorant give the player the ability to throw all kinds of grenades, bombs, as well as projectiles fired from a grenade launcher or rocket launcher. Let's consider the example of the Raze's dye missiles. 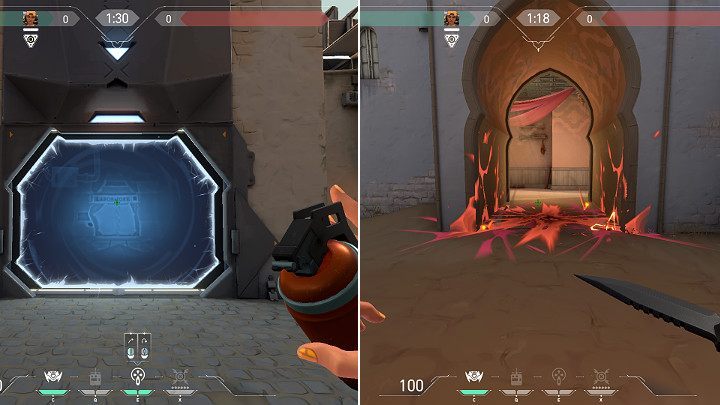 Raze stands at the portal leading from Spike A and throws two grenades through the portal, which explode at the so-called. Short B leading to Spike point B. This trick can be used when defending Point A - you get a signal that your opponents are storming Point B just through that position.

Valorant portals can also be used to conduct reconnaissance. As an example, we will use the Raze's Boom Bot as well as Sova's Owl Drone and Recon Bolt. With this simple trick, you can watch two locations at the same time and, if necessary, immediately inform your team which way your opponents are trying to get to Spike. 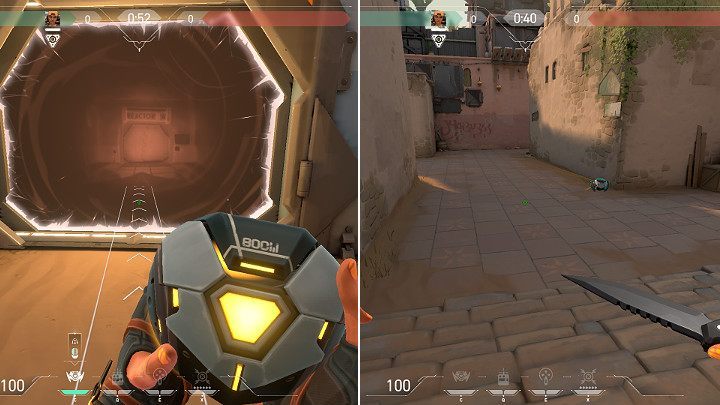 Raze stands at the portal located at Long B and releases a boom bot into the portal, which comes out on the other side of the map and scans the passage leading to Short A and so-called. Bath. With this simple action, you keep an eye on all the important pathways leading to Spike's planting points. 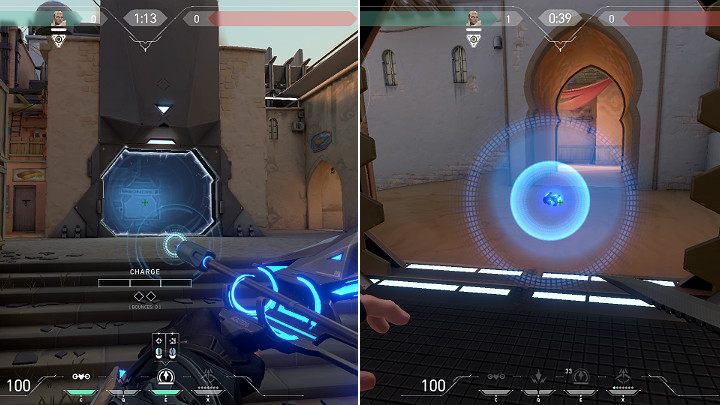 The image above shows Sova aiming a Recon Bolt at the portal leading to short B. The Arrow hits the portal and scans the entire area leading to Spike B. What's more, if you use alternate mode and charge 2 bounces, the arrow after entering the portal will bounce off the door and then off the wall and fly straight into the balcony with the window. 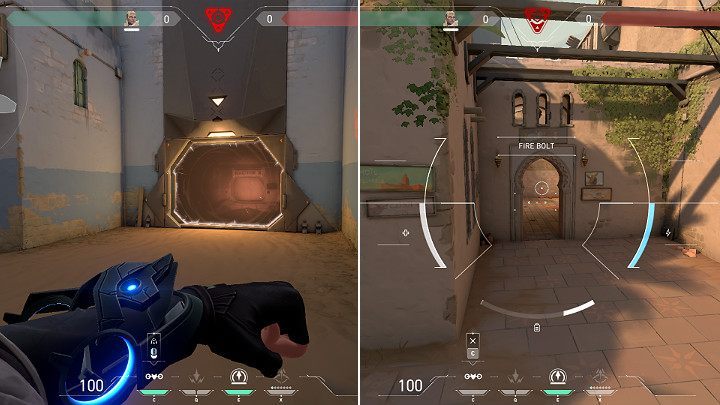 In the third example, we use Sova's Owl Drone. The character stands by the portal on the long B and releases the drone directly into the portal, which scans the path leading to the short A and into the bath. Once again, you can keep an eye on two very important strategic points while standing in one place.

In Valorant portals can also be used to move skills that limit the character's control. An example of the use of this type of skill is Sage's Slow Orb. 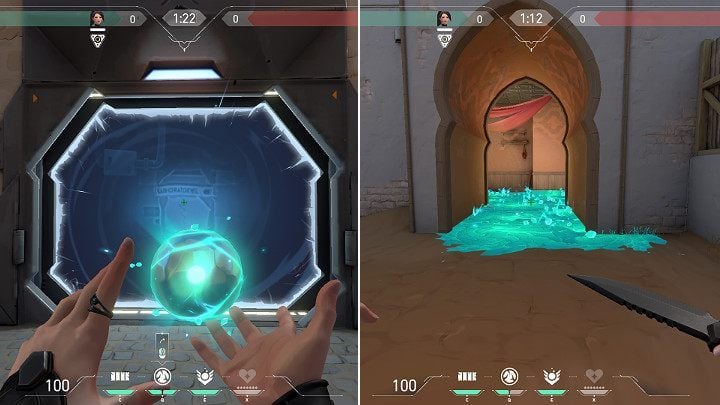 Sage stands at the portal leading to the short B and throws a Slow Orb that covers the entire passage leading to the balcony with the window. All the opponents there can have a big problem when suddenly there's an ice rink beneath their feet.