In Valorant, players can use multiple weapons to eliminate opponents and win subsequent rounds. You can use a variety of pistols, sub-machine guns (SMGs), rifles, sniper rifles, heavy machine guns and shotguns. This chapter has information about shooting mechanics - how to control the weapon, what shooting techniques to use, and how to practice accuracy.

In first-person shooter games like Valorant, aiming plays an extremely important role. Without proper accuracy, you won't be able to get good results and that can lead to problems for the whole team. If every second shot you take hits a wall or flies into space, you won't have much of a chance in tactical shooters like Valorant. This chapter has information that will help you improve accuracy in Valorant.

In Valorant, headshots are extremely effective and most of the weapons available in the game can eliminate a target with just one bullet - if you hit the head, of course. For this reason, it is worth making a habit of holding the aim precisely at the height of the opponent's head, so that the first shot will give you the biggest chance of eliminating the target. If the opponent survives, you can easily hit them with another shot without having to change the cursor's position. 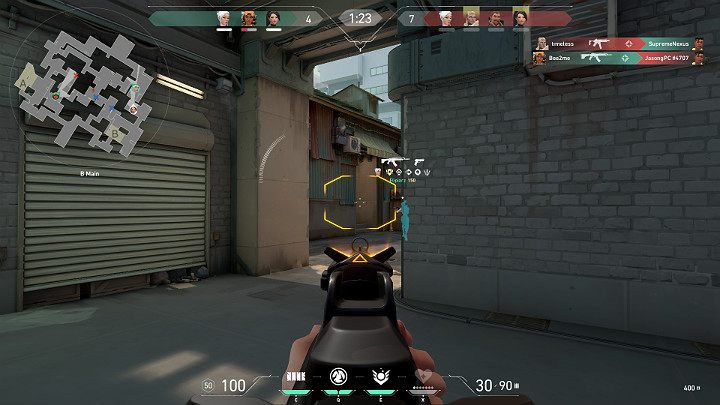 Each weapon in Valorant has a recoil, which makes it necessary to adjust the crosshair position in order to hit a specific body part when firing a longer series. Note the fact that unlike other first-person shooters, weapons in Valorant don't have fixed ballistics. There are many situations where one series will move slightly up and to the right, and the next one will start to pull to the left. Knowing the possible bullet spread when firing a given weapon is essential to mastering its mechanics. 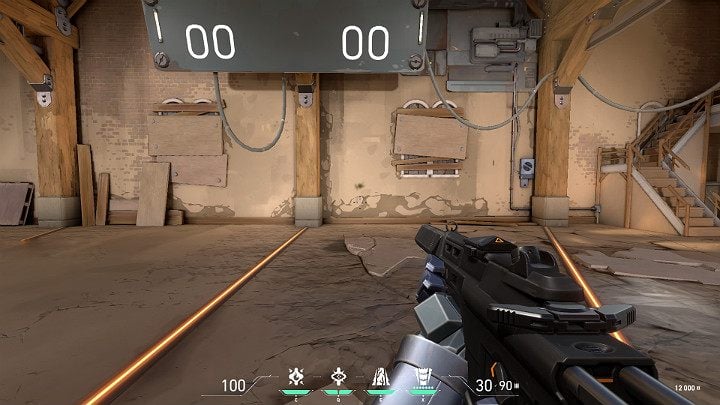 You can train your aim at the shooting range, one of the maps available in Valorant. You can use any weapons and switch them at any time. What is more, when you are on the shooting range map, you don't need to worry about the ammo - it is unlimited and the weapons don't require reloading. You can also place several bots in the small square and use them as training targets (with or without armor). You can practice recoil correction on one of the walls. When firing, try to have the bullets holes as close to each other as possible.

Each weapon in Valorant has a specific range at which it inflicts the maximum possible damage. Knowing the effective range of the weapon will greatly increase your effectiveness on the battlefield. Note that most weapons available in Valorant cause reduced damage when you shoot outside their effective range. 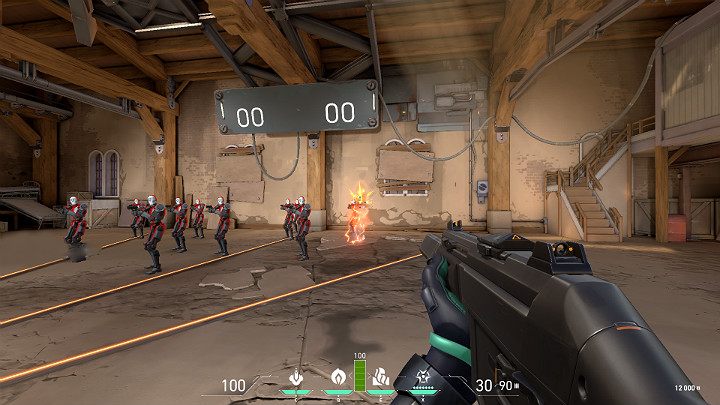 For example, the Phantom rifle visible in the picture above, deals 156 damage with a headshot from 0-15 meters. If the distance is increased to 30-50 meters, the damage caused by this weapon will drop to 124 points. All gun stats can be checked inside the game or during gameplay in the shop menu.

Some machine or semi-automatic weapons available in Valorant, especially SMGs and rifles, have an ADS mode that allows the player to use an additional sight. The transition from hip-shot to ADS mode takes a brief moment during which the player cannot perform any actions. 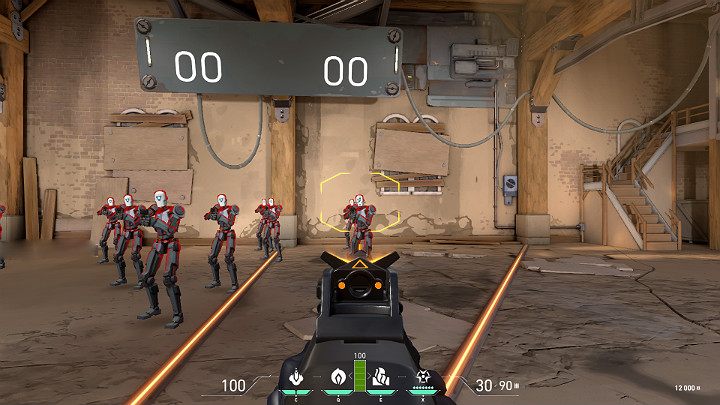 The use of ADS mode increases the weapon's accuracy and stability, but at the expense of fire rate. ADS mode is particularly useful when shooting from medium and long distance. This allows you to shoot much more accurately - it will be easier for you to control the weapon, even when firing a longer series.

Perhaps the simplest technique that will allow the player to better control any weapon available in Valorant is the crouching technique. Crouch gives you much greater control over the weapon, making it easier to fire a longer series. 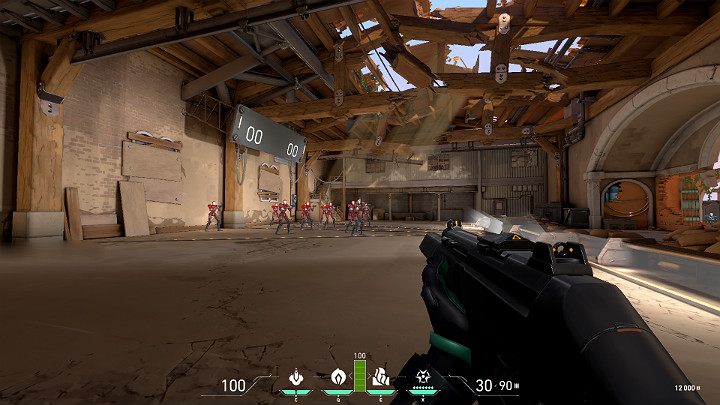 Shooting while in crouching position is especially important for weapons with enormous bullet spread, such as Stinger, Vandal, and Ares. What is more, crouching and using ADS mode can give you the best weapon control.

Shoot after you stop moving

The best way to shoot from weapons available in Valorant is when you stand still - after you have stopped moving. This makes it much easier to control a gun, especially one that has full-auto mode. There are, of course, some exceptions in Valorant, such as shotguns, which are used at very close range. What is more, shotguns also have good accuracy during a jump, which can be useful in some situations.

Test your skills at the shooting range

In Valorant, you can go to the shooting range at any time to test your skills. You have several tests to choose from but we recommend the one in which you have to eliminate as many bots as possible within a certain time limit. 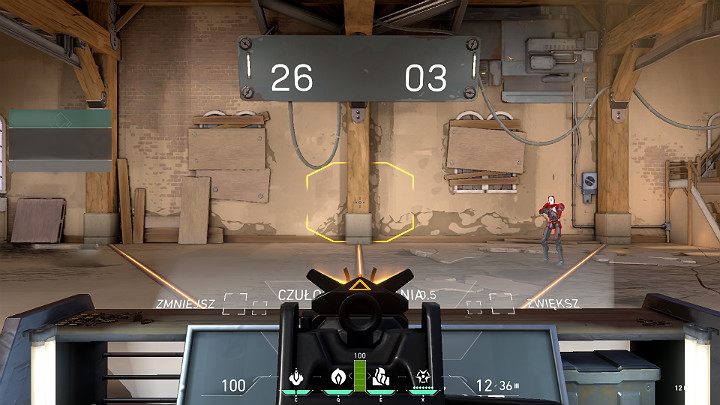 During the trial, you have 30 seconds to eliminate as many targets as possible - the maximum you can score is 30 points. Bots come and go so you have to be vigilant and extremely accurate. It is best to aim at the head because it takes the least time and helps you to quickly eliminate the target. Once the target has been eliminated, return to the starting position and keep the crosshair in the middle of the training room (as in the image above), at the height of the opponent's head. When you spot a bot, try to aim at its head with one smooth move and shoot. This simple exercise will give you the correct reflex to immediately respond to a target appearing in sight and teach you the habit of aiming at heads.

In first-person shooter games, including Valorant, you can use a number of techniques that make gameplay much easier, improve your accuracy and sharpen your reflexes. The use of the following techniques will certainly increase weapon control and contribute to better performance during the game. In this chapter, you will learn about the shooting techniques available in Valorant.

Firing single bullets is a technique that requires a lot of skill and mastery. Single-shot technique is usually used from a further distance, allowing the player to take shots and remain in constant motion. Using this technique, shots are fired individually or up to 2 rounds each followed by a short pause to reset the weapon's recoil. In that time, you can step to the side and shoot again. It is worth remembering to fire shots while standing still, that is, at the end of any movement. The advantages of this shooting technique are:

The most common technique is to fire short series of 3-7 rounds each. Short series can be used by any automatic weapon, and this technique works best at medium and close range. It is important to mention that, unlike the single-shot technique, the aim must be adjusted (usually by pulling the rifle down). If you want to use this technique when firing a semi-automatic weapon, press the LBM the right number of times and then take a short break to reset the recoil. To maximize the effectiveness of the short series technique, stand still or crouch while shooting. The advantages of this shooting technique are:

The most difficult shooting technique to master, which requires knowledge on each weapon to master its bullet spread. Spraying involves continuous firing with long series, often until the magazine is completely emptied, while correcting the crosshair's position. Due to its much lower accuracy and effectiveness than the other two techniques, spraying is usually used over a very short distance where the player has an easier task of hitting the opponent. The biggest advantages of this type of technique are:

Some of the weapons available in Valorant have an alternative firing mode, namely: basic pistol Classic, Bucky (shotgun), Stinger (SMG) and Bulldog (rifle). What's more, in the case of Stinger and Bulldog, the alternative shooting mode is only activated when switching to ADS. 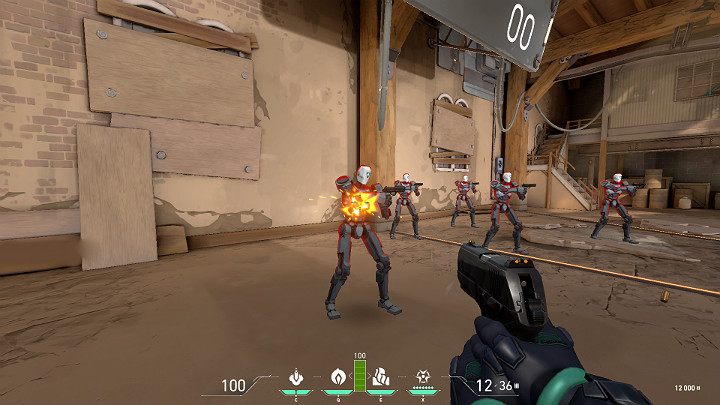 The Classic pistol fires 3 bullets at a time in alternative mode, Bucky has the ability to fire more concentrated bullets, while Stinger and Bulldog shoot in BURST mode when the ADS is activated - that is, only a series of 3-4 bullets, but much faster than normal. It is worth remembering this during the game and use it for your own benefit whenever possible.