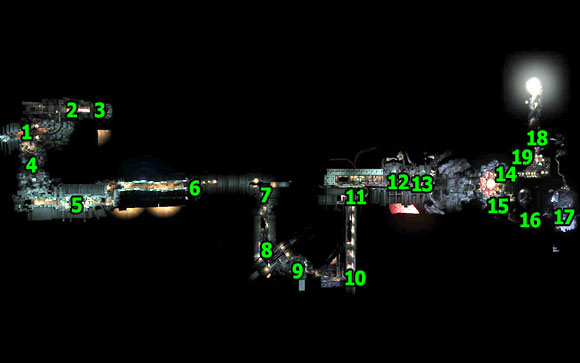 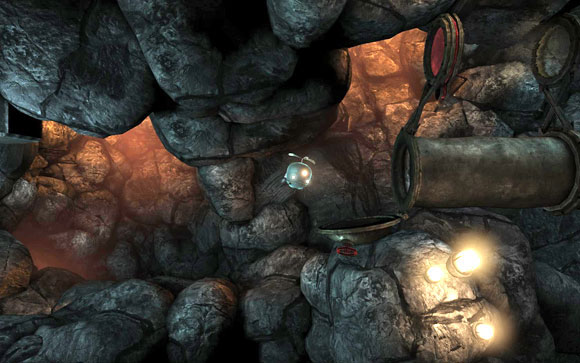 Start flying to the right. You'll reach the first tunnel. Fly inside it [#1]. 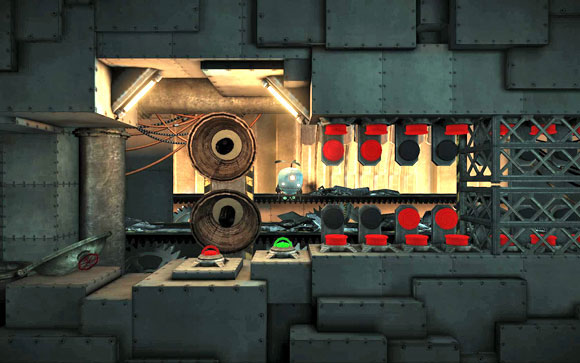 Prepare for the memory puzzle at the top [#2] - it consists of two phases. In both phases you have to remember and replay sounds produced by two speakers. In the first phase there are four sounds, in the second phase - eight. Unfortunately sounds are generated randomly, so there is no one correct solution. Once you press the piston next to speakers, they will start playing. Notice which speaker plays (or maybe both) and if there is any pause between sounds. In the first phase, you have to do it twice. Use buttons to play the sounds. When you're sure that you set everything correctly, pull the second piston. If you fail, the sound will be played endlessly - you can change button during the game or you can replay the original sound. 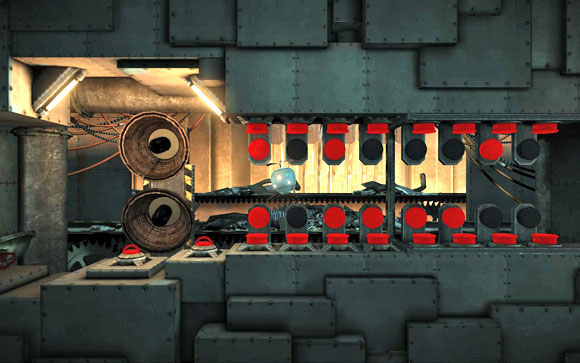 The second phase is more difficult, because you have 8 bits instead of 4. The rules are the same. Use the piston to start playing sounds and use another to play sounds set by you with proper buttons. 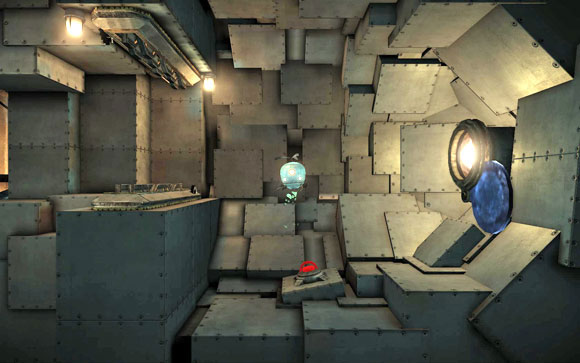 If you succeed and complete the second phase, the gate will be opened. Get inside and use the piston to pull out the shiny sphere [#3]. Take it with you. 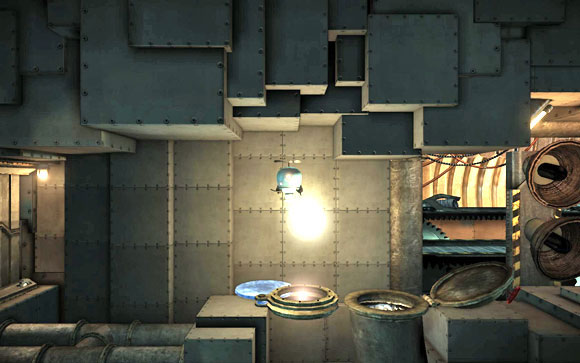 Throw the sphere to the channel on the left. Fly inside the right channel to get down. 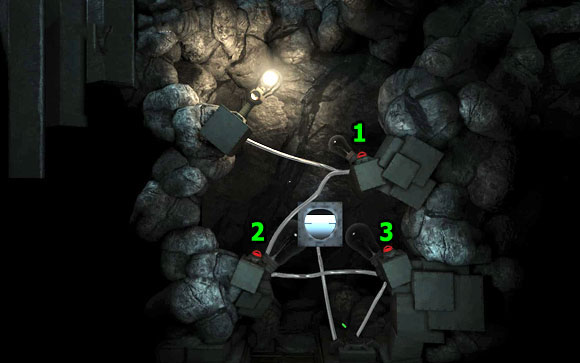 Push the sphere to the gripper, thus powering three bulbs [#4]. Your task is to raise the energy to indicated level. In order to do this, light up bulbs indicated on the above screen: 1 and 3. 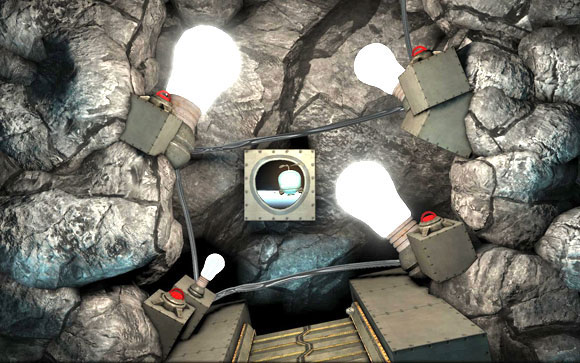 The gate should be open now. Before you go any further, do two things: switch the lever to transport energy further and turn off bulbs! The only thing you have to do now is to turn on all four bulbs down. Another gate should be opened. 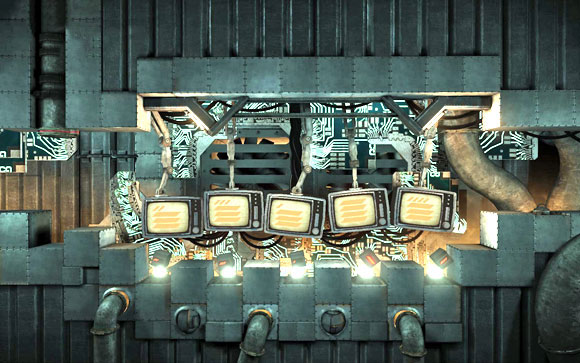 The next puzzle is quite easy - the only thing required is good memory [#5]. First fly to the gate on the right. The janitor should close it right before you can get inside. Once he flies away, you'll be able to pull the piston. When you do that, all metal boxes will disappear and there will be strips on monitors on the bottom row. You have to remember how many stripes are on each monitor (from 1 to 5). Then your task is to place numbered boxes under these monitors, which initially had the same number of stripes (as on the box). Eventually you should create the same pattern with three bottom rows filled completely. Finally pull the piston to open the gate. 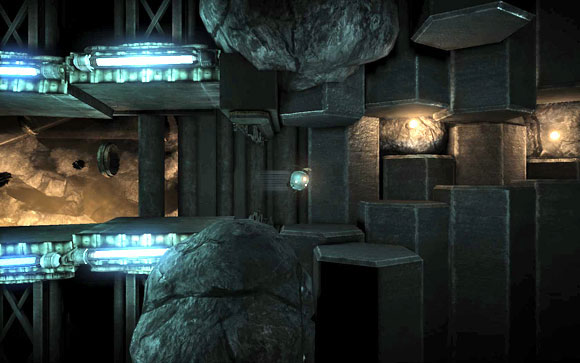 Further way is easy and doesn't require any skills [#6]. Fly to the right. 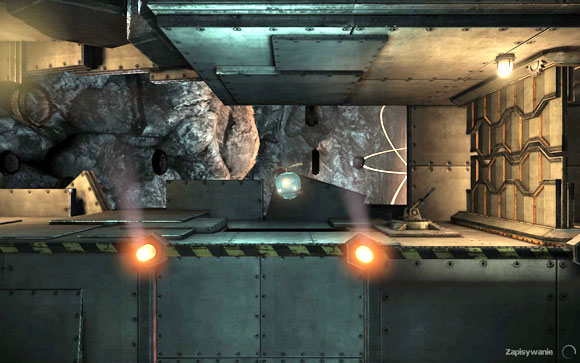 You should get to the lever, which unfortunately is broken [#7]. In this moment a manhole in the ground will open so you can fly down. 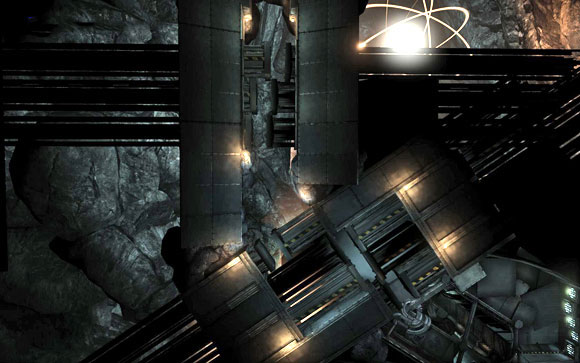 You'll reach few large moving pistons - you have to fly between them [#8]. But do not worry - they can't crush you. 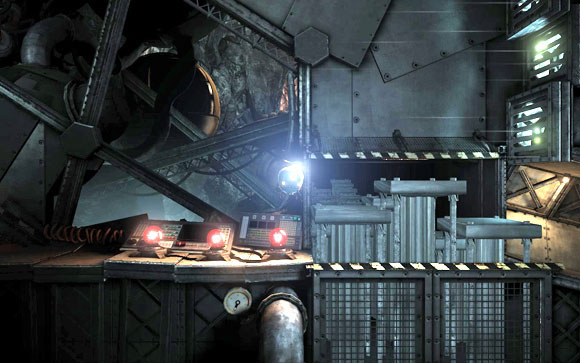 The next puzzle requires some skill. You can see moving platforms [#9]. Using 3 spheres you have to arrange them in such way, that you can get to the other side. Unfortunately there are powerful fans over platform, so you can't make any step forward. You can try to do it without any changes but if you have problems, you could try to arrange platform as shown on the above screen - it should make it easier. You might also try it by yourself to find the best solution. The most important thing is to start flying to the right just after the first platform starts going down. 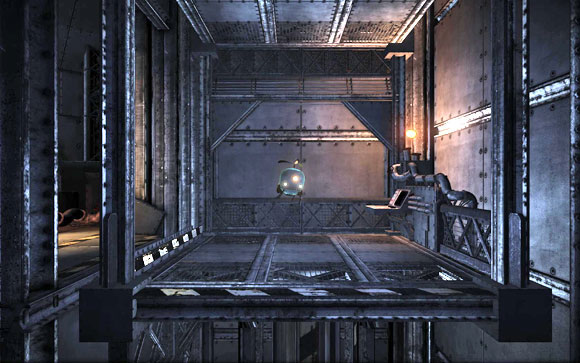 Once you made it through fans, go to the right. You should reach the elevator [#10], which will take you up. 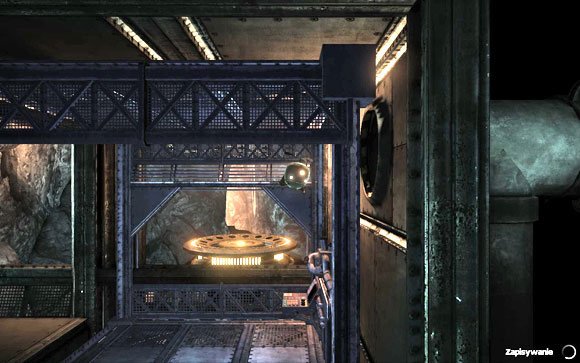 When the elevator stops, fly to the channel on the right [#11]. 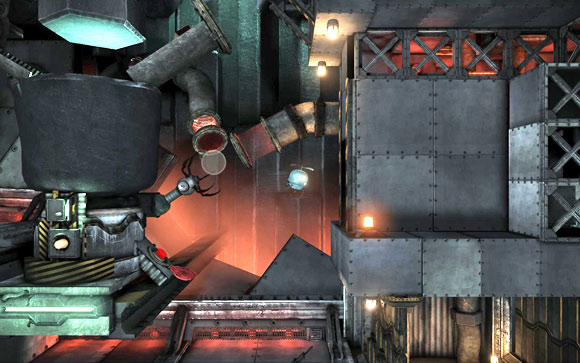 You'll reach a large cauldron [#12]. Notice strange objects falling inside and generating light. Unfortunately the lever at the bottom is broken, so you have to find another way to get further. Move the red clothing and press the button. 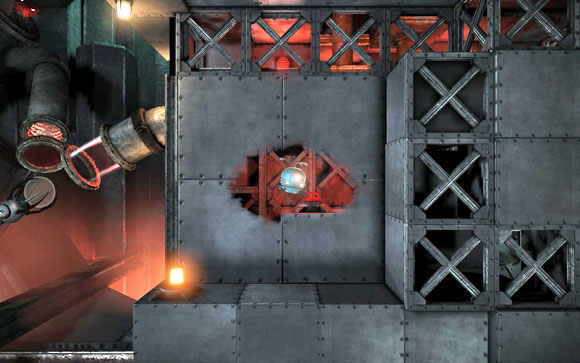 A passage will be unlocked. Fly inside it. Pull the piston - two pistons above you will change positions. Return to the main room and again press the red button. It will unlock the passage through the channel at the top between two pistons. 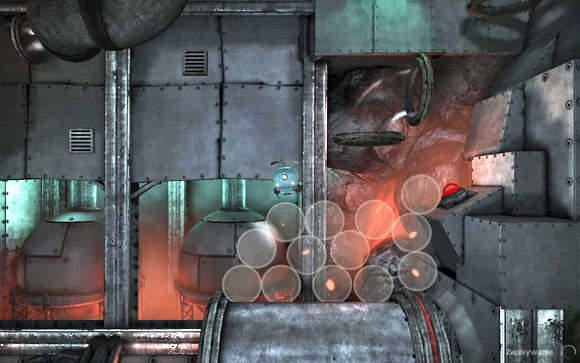 In the next room [#13] use the piston, thus opening the manhole. Fly inside the channel and continue forward. 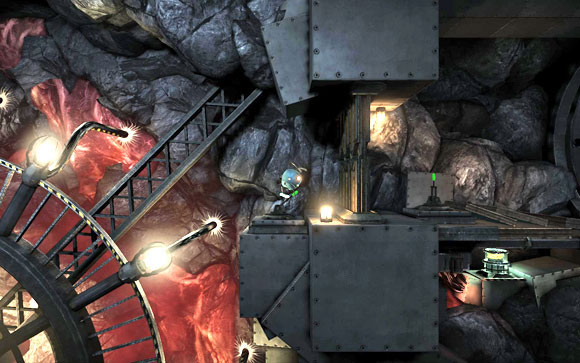 You should find yourself in the room with a large wheel in the center. There are some glowing spheres around [#14]. Go to the other side, to the lever at the top. Unfortunately, in the moment you try to switch it, an alarm is triggered, informing about malfunction. 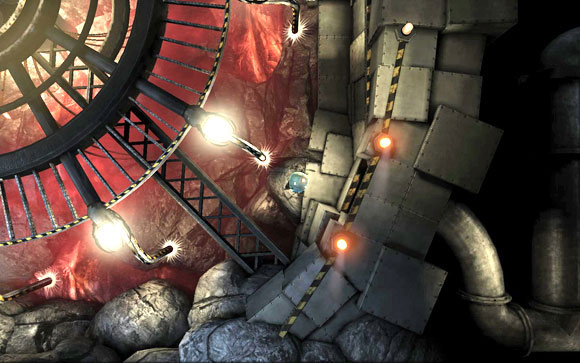 Emergency exit will open at the bottom [#15]. Use it to get to the tunnel leading to the next room. 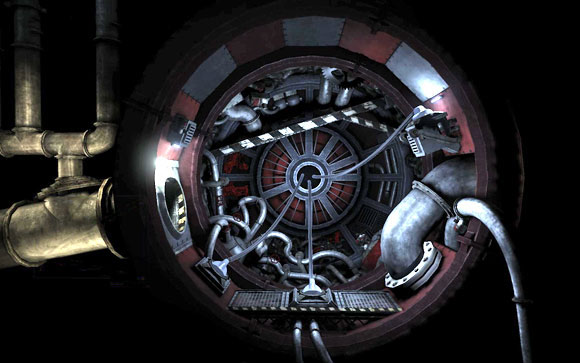 Inside you'll find three large plugs [#16]. Pull them out with tractor beam. Once you complete the action, everything will start falling apart. The janitor will appear. He will save you, but finally you'll be sucked in by one of pipes. 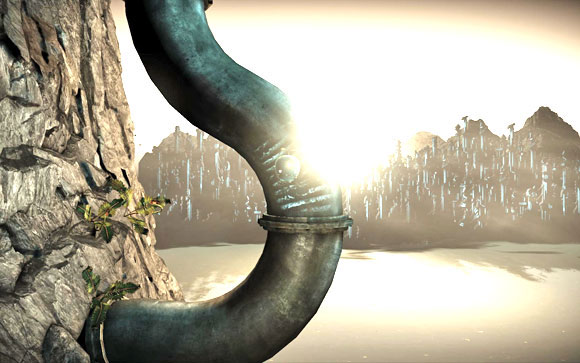 You'll fall into water [#17] but after a moment you'll regain a control over the main character. Quickly fly up. Wait until the manhole opens and fly inside the tunnel. You should see an outer world for a moment - this is a proof that you're closer and closer to the exit. 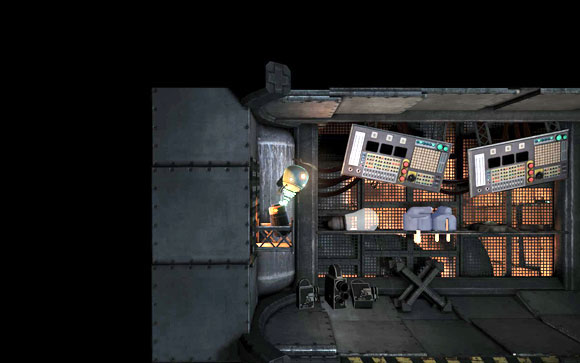 You'll reach the place with massive, quadruple gate [#18]. Fly down and then turn left, passing by large cauldron. In a small room you'll find battery [#19]. Take it with you and go to the right. 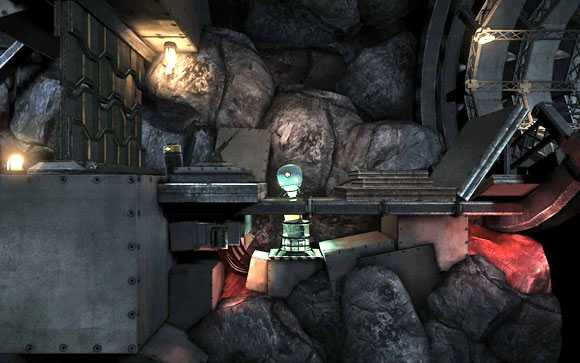 You should reach the place where the failure occurred [#14], but this time from another side of the gate. You have to replace the used battery with the one you just have found. First remove metal plates, which block an access to the battery. They pull out used battery and replace it with the new one. Remember - place the green battery inside. The gate should open now.

Now it is time for the last step, leading to the game end. It depends only on you, which game ending you choose. A more detailed description can be found in the next chapter.