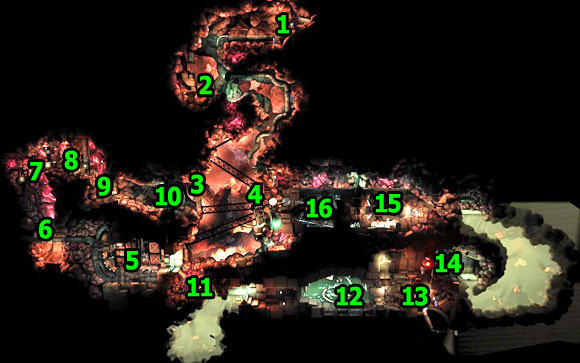 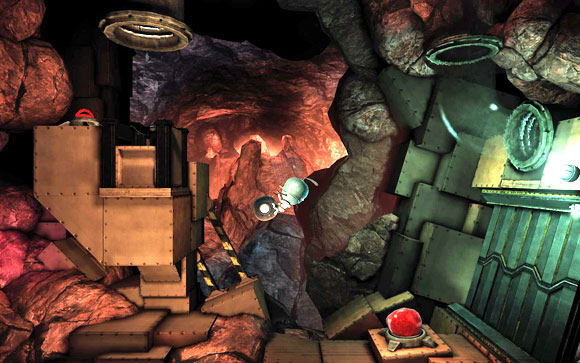 Right after the start [#1] fly along the pipe. You should reach first closed gate [#2]. Use the piston to release a bomb. Catch it with your tractor beam and place next to a small organ near the passage. The bomb won't harm you, even if you gold it during the explosion. Explosion will damage the organ and the passage will open. 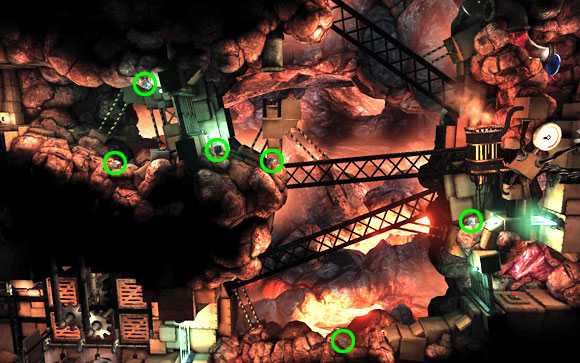 Fly along the pipe. You'll get to the large open space. On the left you'll encounter another mechanism which releases bomb [#3] and on the left you can see a kind of boiler [#4]. Your task is to put six pieces of coal inside the boiler. Four of them can be found in this part of the lever. Rest two can be reached later. A screen above illustrates locations of all coal pieces. 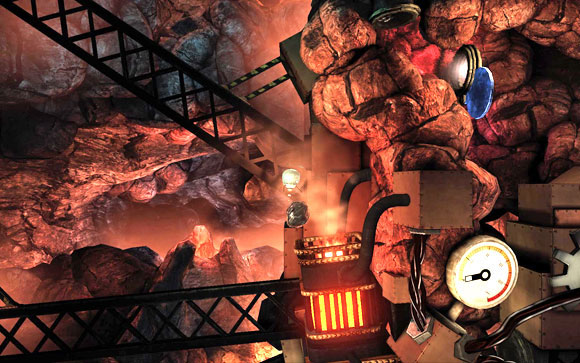 In order to pull them out, you have to use the bomb again. Throw each coal piece inside the boiler to increase temperature. It will be useful later on. 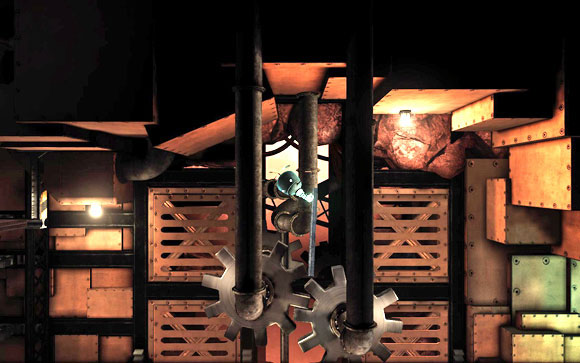 Once you add four coal pieces to the boiler, it is time to get another two. Fly down and head left [#5]. You'll reach a mechanism with two gears. First, you have to stop them, which will result in opening the manhole leading to the pipe. In order to do this, pick up the metal bar lying on the ground and place it between gears (from above). 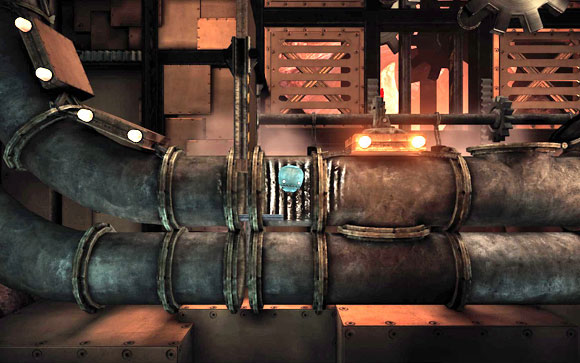 The manhole should be unlocked - you can open it now. Set the lever in such position, that the first blockade moves on the top (it should left the passage inside pipes). Now catch the bar again and fly with it inside the pipe, placing it on the blockade path. 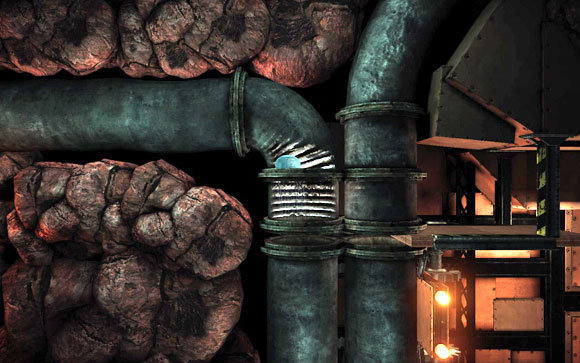 Return to the surface and switch the lever. The first blockade should leave the lower pipe unlocked and the second blockade will unlock a further way. 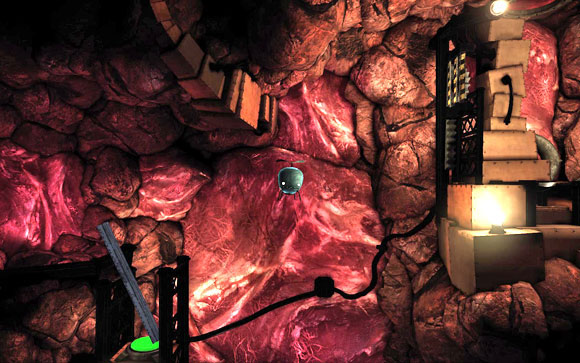 You'll get to the further part of this level [#6], where you'll fly through the force field. At start pick up the bar, which will be useful in a moment - place it on the button [#7] which will unlock a passage. The button must stay pressed because otherwise the trapdoor closes. 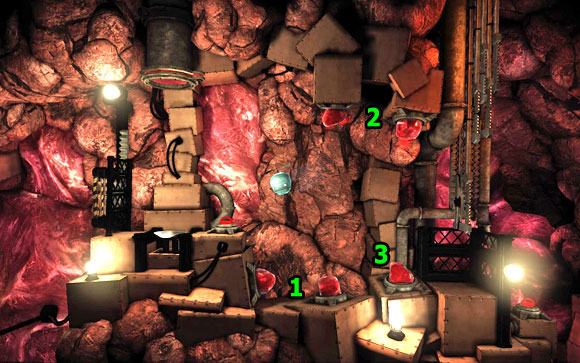 Another puzzle [#8] requires some skill. Use the bomb, which you can require by pressing the piston, to damage all five organs. As result they will raise trapdoors. The problem is that each trapdoor has different rate of descend so you have to do that in correct order. The solution is shown on the above screen. 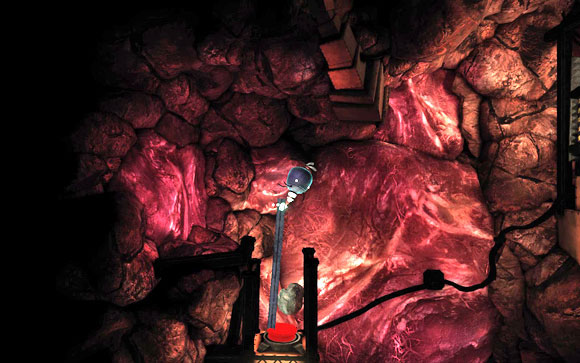 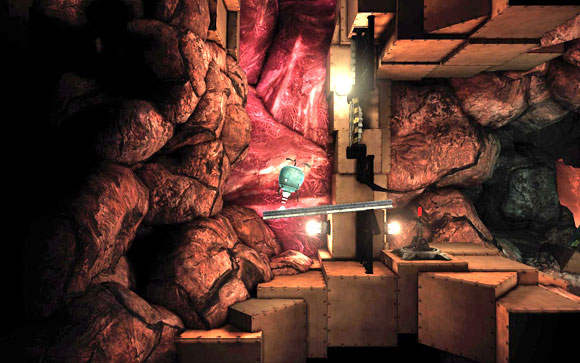 Take the bar and once again fly to the obstacle [#9]. You have to put the bat in a narrow gap, thus switching the lever and unlocking further way. 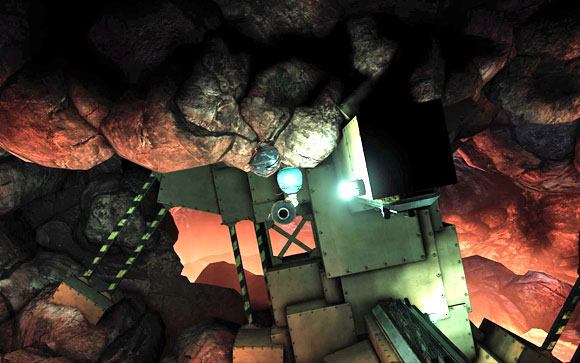 Another gate [#10] can be opened by pressing the piston. You'll find here also two missing coal pieces. You can now use the bomb to pull them out from rocks. A coal piece at the top can be also pulled out with tractor beam as shown on the above screen. 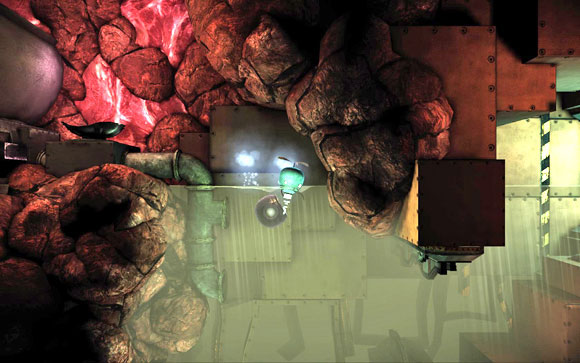 Once you throw last two coal pieces into the boiler, a puzzle will activate in further part - go there now. Fly to the very bottom where you can see larger metal boiler [#11]. Next to it you'll find a jar. The boiler has two markings on it - fire and water. The further part of this level is blocked (you can't swim), so you have to Lower the water level. 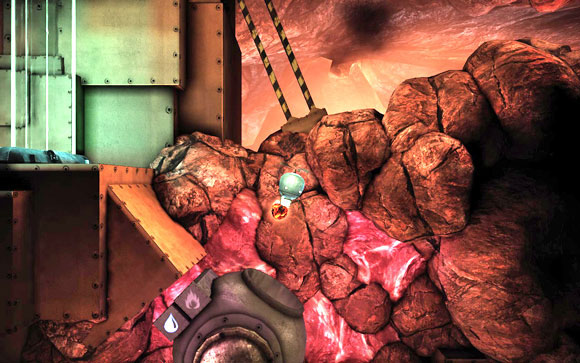 You can do it using the boiler. The only thing you have to do is to add water to it twice. You'll get water with the jar. Then you have to add fire - look at volcanic rocks which are throw out from small volcanoes. 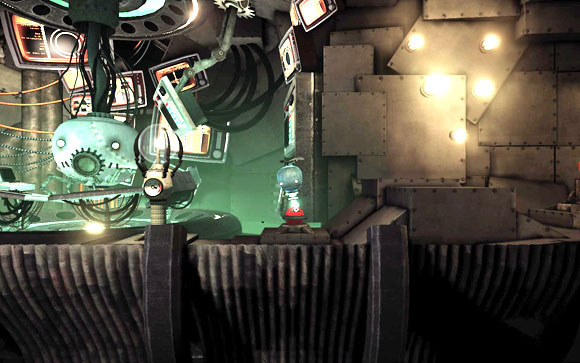 Once the water level drops, move further unlocking the door by using the piston. Bit further you'll be scanned by a camera - another door will be opened. You'll get to some kind of monitoring center [#12]. Use the piston to the old, barely glowing sphere. 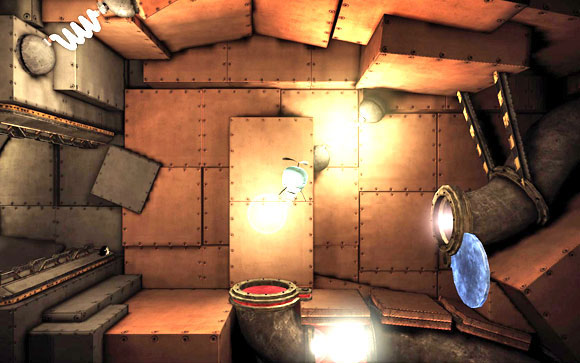 Use the lever to open another gate and then push the used sphere to the open pipe on the right [#13]. After a moment you should get a brand new, shiny sphere. Take it and place it into gripper. After few moments a gate leading up should be opened. 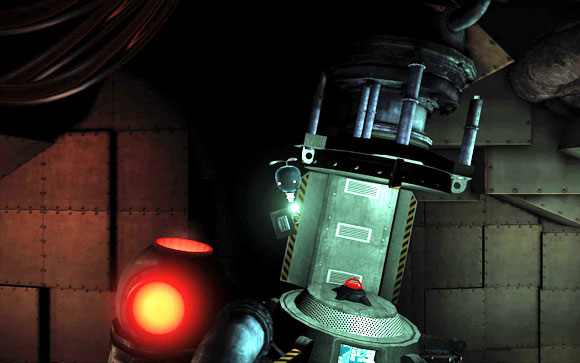 It is time to upgrade your robot. You'll receive a swimsuit. There is a box floating in the water [#14]. Use the tracking beam to pick it up and place it in the large cauldron. Now pull the piston. The swimsuit will be installed and from now on you'll be able to swim underwater. 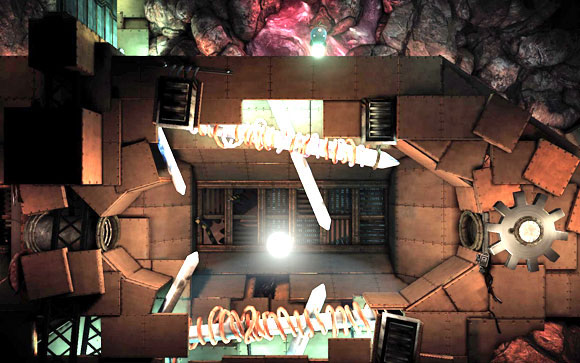 So swim to the next, two-phase puzzle [#15]. Your task is to move the shiny sphere to the other side, by activating and deactivating large magnets. The first part is quite easy and you shouldn't have problems with it. Just remember that once you deactivate magnets, the gravity will work again. When the sphere touches magnets, you'll be moved back to the start. 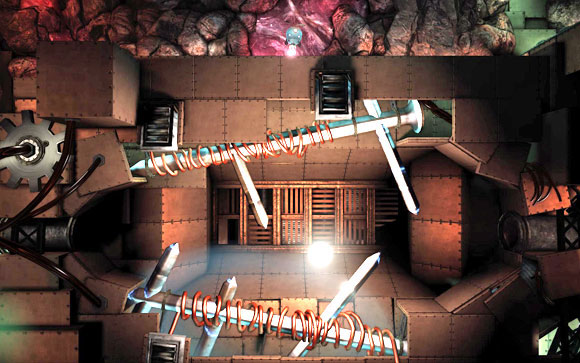 The second part [#16] is more difficult. First you have to release the sphere, so it can start falling down. Before it gets to the bottom, activate magnets for very short moment. Before it reaches the bottom, do the same action. This task is really difficult because it depends on player's skill and it is hard to say when you should activate magnets. 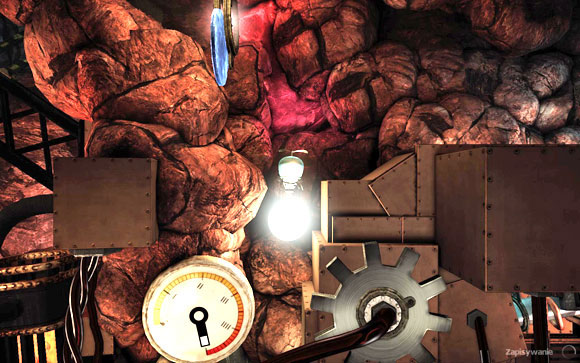 When the sphere gets to the end, go to the left and catch it. You have to direct it to the tunnel above. Then go to the bottom, use the piston to unlock the gate and return to the beginning of this level [#1] - it is best to go along the tunnel. 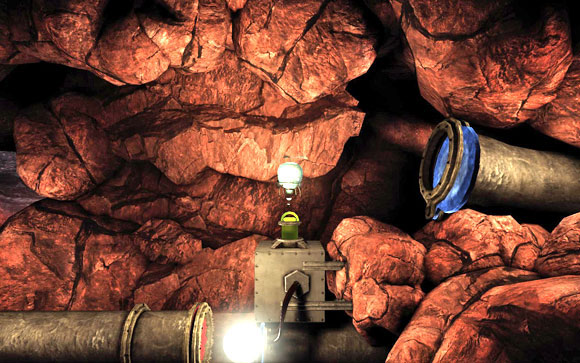 The sphere should be already there. Use the piston to move it further. Another tunnel will open. It will take you back to the Pacemaker level.