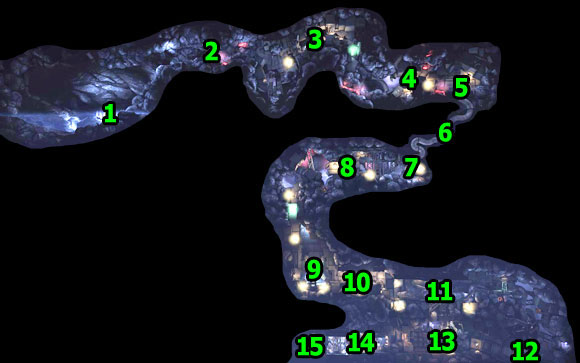 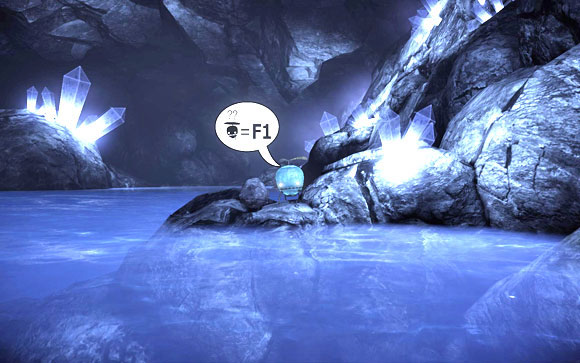 You start the game with a short movie showing a small robot being dragged underground. Once you gain control over the main character [#1] you'll also receive information about hints system. F1 key activates a small bubble which contains a small hint on actual puzzle (you have to be close to the puzzle; otherwise you'll see a question mark). Keyboard controls are quite modest - you control your robot with WASD keys, while tractor beam is activated with one of following: LMB, RMB, [SPACEBAR], and [CTRL]. 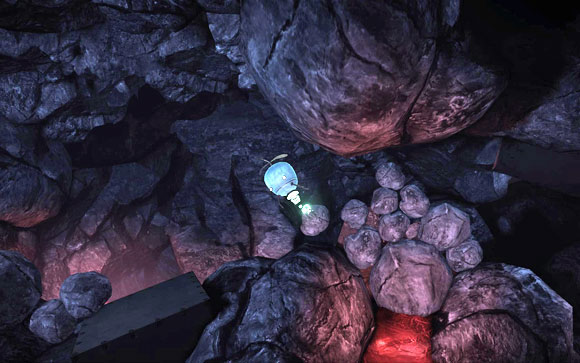 Ascend and fly up until you get to the first obstacle [#2] - rocks. Use the tractor beam to grab rocks and then throw them away to clear the path. You could also try to ram the pile of rocks and force your way through. 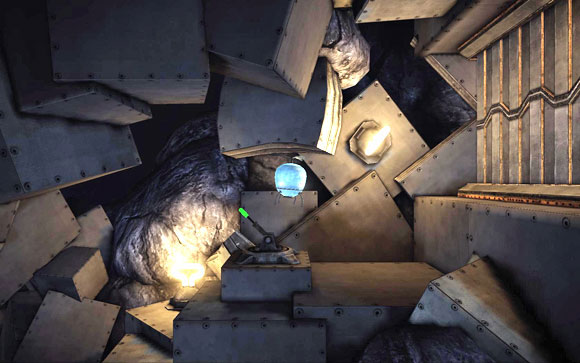 No need to fly down because you won't be able to unlock a passage there. On the other hand, you'll find closed gate [#3] at the top. In order to open it you just have to move a lever to the right or to the left (use the tractor beam or push the lever with robot). 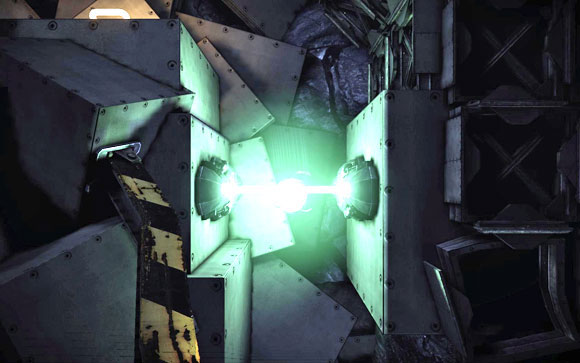 Fly further until you reach a force field. As a reminder for future - you can't transport anything through it, even a tiny pebble. 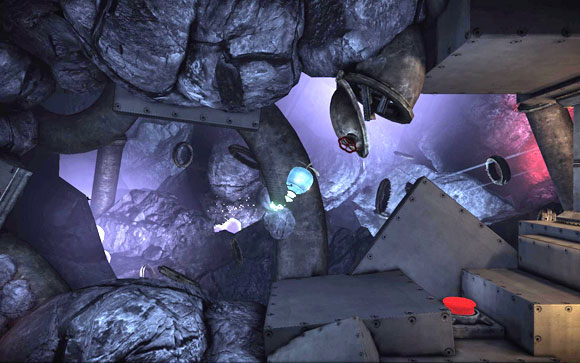 Next you'll reach another closed gate [#4]. It opens only when the button is pressed. Obviously you're not able press the button and fly further at the same moment, so you could use a help of some stone. There are several of them to the left - use the tractor beam to grab one of them and put it on the button. Once the gate is open - move forwards. 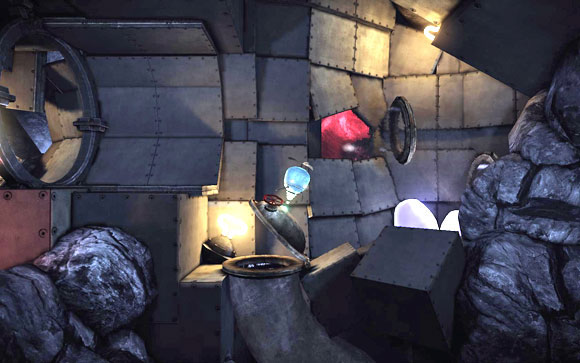 A bit further you'll encounter a dead end to the right [#5] and sewer manhole. Use the tractor beam to open the manhole and fly through the tunnel [#6]. 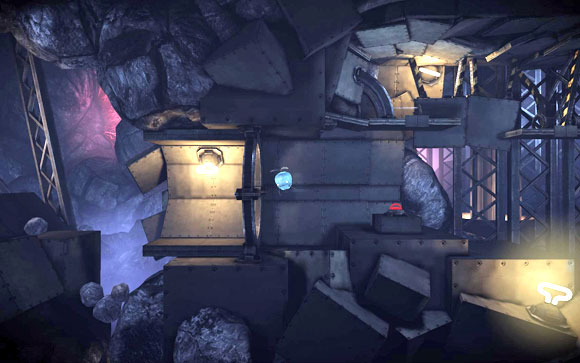 You'll reach the next part of location [#7]. Fly further to the left, where you'll encounter another closed gate [#8]. When you pull the piston, a small sphere will be shot - unfortunately it will fall into the second tunnel. You have to block it. 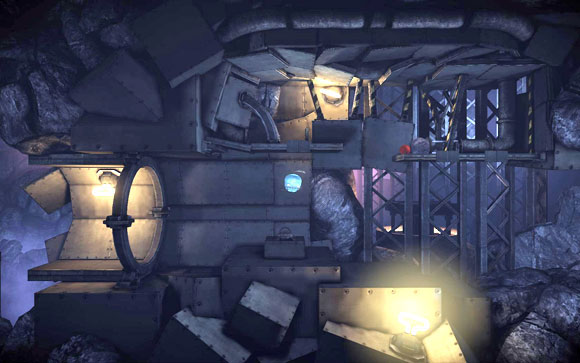 One the left you'll find some stones. Take one and place it next to the tunnel on the right. When you pull the piston again, the sphere will hit the stone and thus you'll be able to get it. 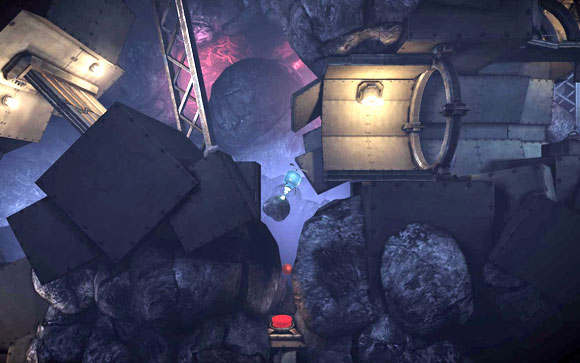 The last step is to put the sphere on the button (because only the sphere fits into a thin gap). Take all stones which block the gap and then throw the sphere into it - the gate should be open. 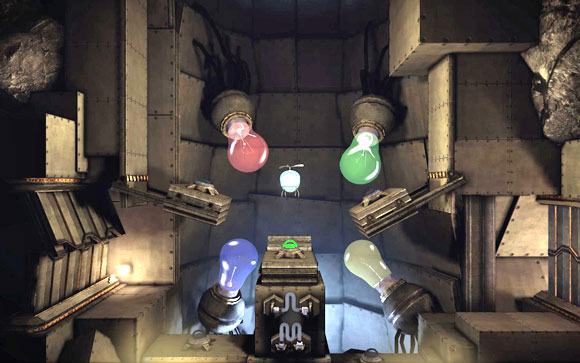 Fly down until you get to four colored light bulbs [#9]. This puzzle tests your memory and unfortunately it is random. Your task is to repeat the sequence of lighting bulbs three times. Once you pull the piston in the center, three random bulbs will light up. You have to repeat that action. If you fail, you'll get brand new sequence. The second time four bulbs will light up, while at the third time you'll have to deal with five bulbs. Mistake doesn't reset your progress; you'll have just to repeat a given test. 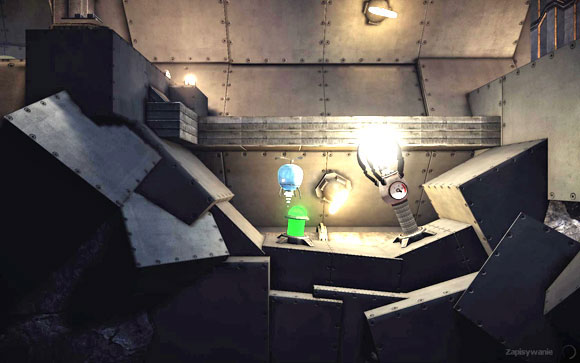 Right after the gate you'll find a shiny sphere [#10] - in order to free it, pull the piston. Now you have to keep the sphere with you all the time! Try not to forget about it. 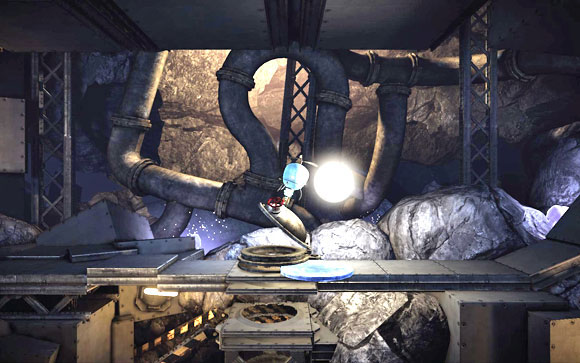 Move to the right. You should pass by another manhole [#11] - open it and this time push a shiny sphere inside it. Keep flying to the right (you'll fly through the force field, so you couldn't get a sphere with you anyway. 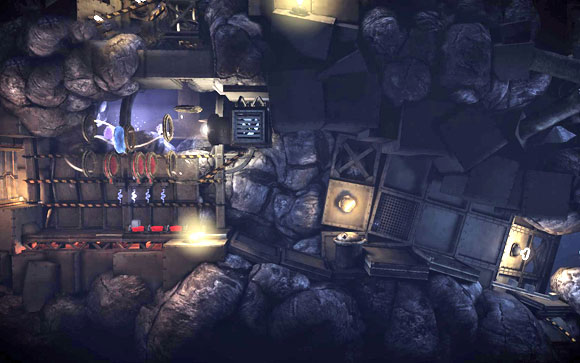 The next puzzle [#13] is quite easy. You have to press three out of four buttons to guide the shiny sphere through the tunnel. One of blockades is open, so you have to find the button which operates it (it is not pressed) - it is mostly second or third button from the left. 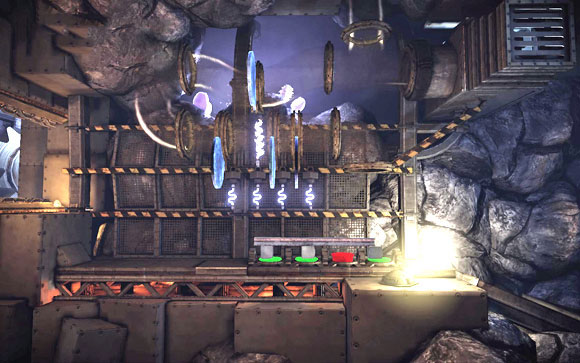 Bit earlier [#12] (on the right) you can find three bricks - use two of them and put them on appropriate buttons. Then place the bar on the bricks horizontally, thus pressing buttons. The shiny sphere will fly out. Take it and move further. 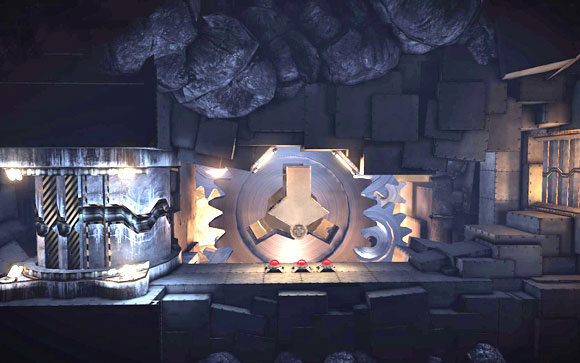 Once the next gate opens, move further until you reach the last puzzle of this level [#14]. Your task is to put three parts together, so they can fit into a hole in the background.

Assuming that we number three moving parts as follows: 1 (closest to the screen), 2 (the middle one), 3 (rear), the three pistons work as follows (all parts are revolving in clockwise direction): 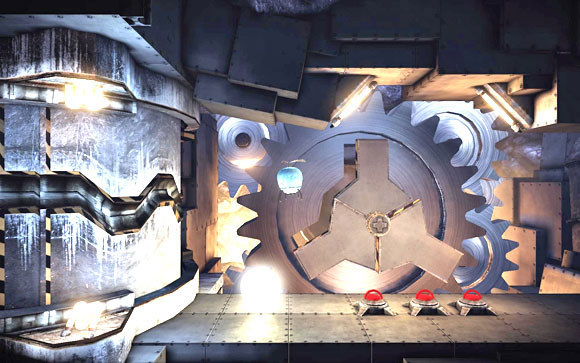 In order to put all parts in correct configuration, you have to pull twice the middle piston. 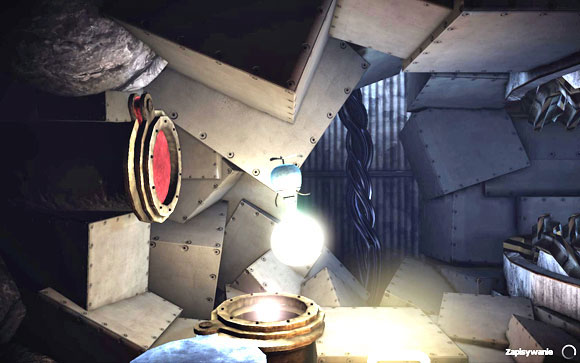 Once the last passage is opened, move the shiny sphere to the opened tunnel [#15]. Once it gets sucked inside, another manhole will be opened. It leads to the next level.