I'd strongly recommend that you start constructing new units right away. Having Brute units should be your top priority, however you can also consider buying 10 or more Defilers. Make sure that a lot of turrets have been placed around your main base. I would also recommend summoning a few flying saucers. Switch them to a passive mode in order to allow them to repair some of the nearby units. Your final task here will be to summon at least 4-5 Gravitic turrets. This will prevent enemy flying saucers from destroying your base or attacking your Walkers. Place these turrets to the north and to the north-east. Don't worry if they're far away from your main forces. You'll need them to destroy enemy saucers before they get too close to your army (screen). Don't worry about your main character Orlok, because he'll be protected by Zessus. You should also notice that new allied forces have arrived on the map, including soldiers equipped with rocket launchers. 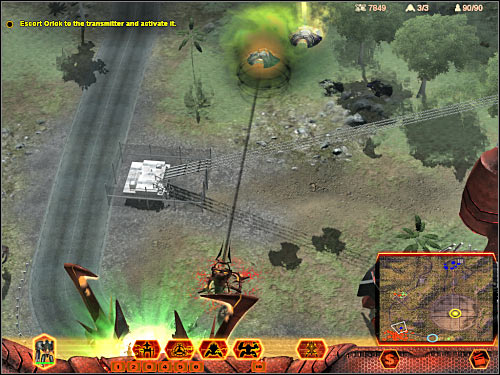 Try gathering at least 20000 credits before you decide to proceed with the final assault. You must have a lot of resources at your disposal, so you'll be able to construct new units instantly in order to replace killed creatures and drones. Make sure that you've been to all nearby resource stockpiles (3 on the map). You can also be on a look out for destroyed enemy tanks, because your Reaper Drones will able to harvest them. Once you're ready, move back your Reaper Drones to the main base. The same goes with Orlok. Wait for them to show up and start moving your ENTIRE army to the east (screen). Not only you'll have to command standard units, but also the available Walkers. Obviously Orlok should join your main army. 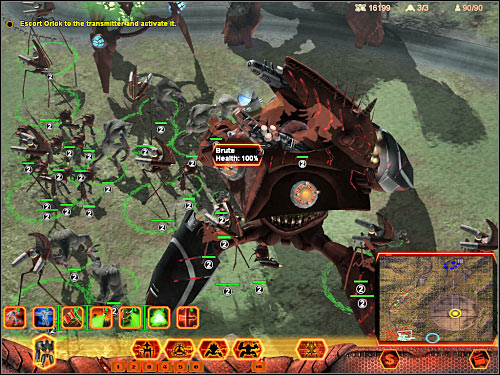 I wouldn't recommend placing any units inside the highlighted area of the map. Teleporting them would be a bad idea, because they would immediatelly end up being shot from all possible directions. Ignore the highlighted zone and keep moving east. You will have to wait for your Walker units to reach the large round structure (screen). Don't worry if it's going to take a while. Don't attack enemy positions unless everyone is ready. 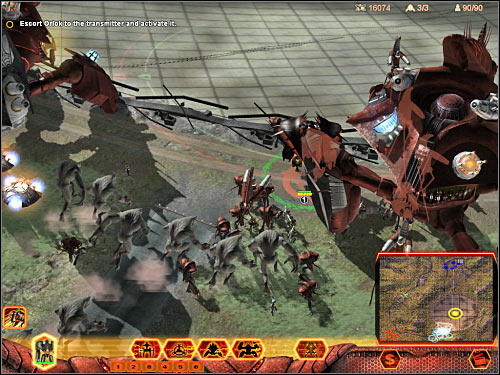 I guess you won't be surprised by the fact that your enemy will also have three Walkers at his disposal. Destroying them will be your top priority. The first enemy Walker should appear somewhere to the left of the transmitter (screen). Assign your standard units to destroy it, as well as two of your Walkers. You can also allow your main character to attack the enemy unit, however make sure that Orlok doesn't lose too much health. You should still remember how to destroy enemy Walker units. Start off by disabling their main guns. After that, destroy the armor plates and shields. Finally, you must expose the core in order to neutralize the Walker. It's very important that you destroy the first mech quickly. Once this is done, select Orlok and approach the transmitter. Doing this will allow you to receive a new mission objective. 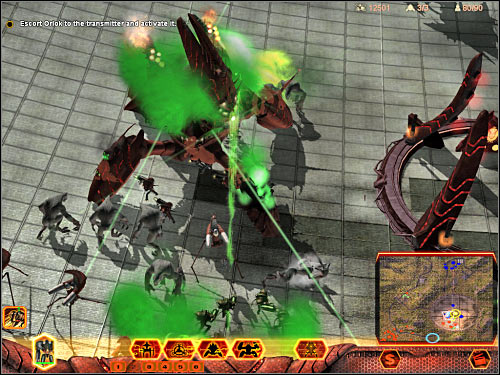 Third objective: Keep Orlok near the transmitter for two minutes

It's extremely important that Orlok doesn't end up getting shot at from all possible angles. He must also remain there for two minutes. He can't get too far away from the transmitter. Otherwise the timer would have been resetted and you would have to repeat all of these actions. I guess it should be fairly obvious to you that you must switch Orlok to Endure Mode, so he'll be able to withstand more attacks. As for your main army, you should focus on destroying the second Walker which will probably appear somewhere to the right (screen). The tactics are still the same, however it's important that your three Walkers survive. Also, don't forget to build new units, so you won't have to command a smaller army. 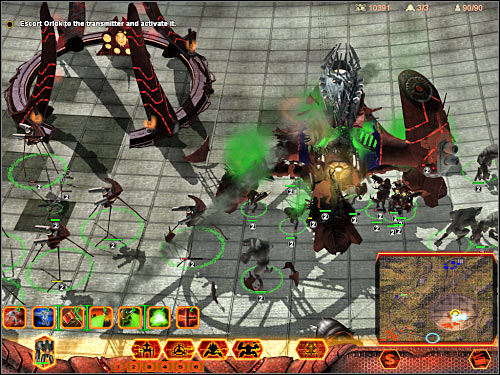 Once you've neutralized the second enemy Walker, focus mostly on destroying standard units. There should be a lot of enemy forces in the area. Observe Orlok's health bar and provide him with much needed help if he's being attacked by a larger group of Hierarchy forces. Finally, you should consider destroying the third enemy Walker. It'll probably be a Science Walker. You can use the same mech to perform this action. Activate the deadly wave ability in order to take out an enemy Walker (screen). I would recommend that you do this quickly, because an enemy Science Walker is probably capable of disorientating some of your units. As a result, you would lose control over them. Now you will have to wait for the timer to reach two minutes. Make sure that at least two of your Walkers are still active. Summon new units if you have some free time, however you are probably low on supplies right now. 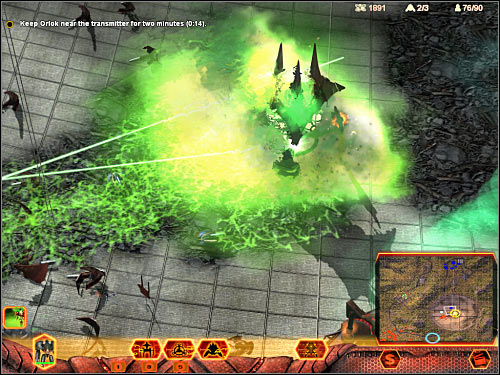 You will be rewarded with a new cut-scene, however this isn't over yet. You must still defeat Kamal Re'x. Once you've regained control over your troops, move back Orlok IMMEDIATELY. He should go somewhere to the south. It's extremely important, because otherwise he may die. You should also know that you don't need him to win this mission. I assume you've still got two Walkers, as well as several standard units. Order your troops to attack Kamal Re'x (screen) by clicking on him. You won't be able to kill him, however you will only have to injure him in order to achieve victory. Wait for a new cut-scene to be displayed on your screen. After that, you'll proceed to the third campaign of the game. This time you'll be playing with Masari units. 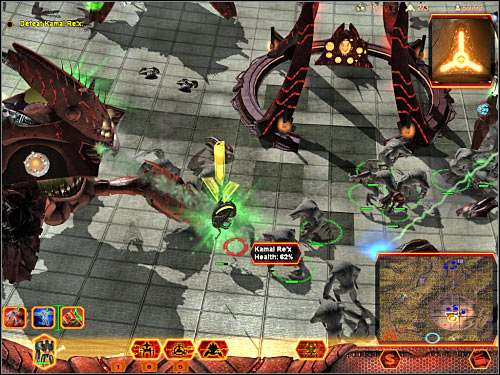