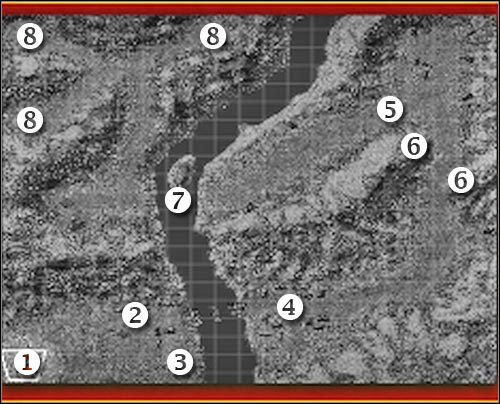 8 - Masari campsites (you'll be teleported there)

The first part of this mission will require you to reach a landing site and secure it. Once this is done, you will have to proceed towards a Masari campsite in order to capture one of its leaders.

Second objective: Use the Defilers to enslave the nearby primitives

I would recommend that you wait for the second objective to appear on your screen. You should also listen to what your leader has to say. Don't worry that you only have two Defiler units at your disposal. You'll still be able to finish this mission, because we'll use one of the most interesting abilities of the Defiler units. Start moving towards a nearby village which is located to the north of the Masari forces. You will have to allow your Defilers to enter the village. Stop them somewhere in the middle and choose the Bleed Mode from the lower bar. Doing this will allow you to create a cloud of poisonous radiation. You'll also start turning civilians into obedient zombie creatures (Slaves). This won't happen right away, but you only have to wait for a few seconds and you should notice that some of the civilians have already been transformed. Acquire a bigger army, however you can't wait for too long, because your Slaves will start losing health. 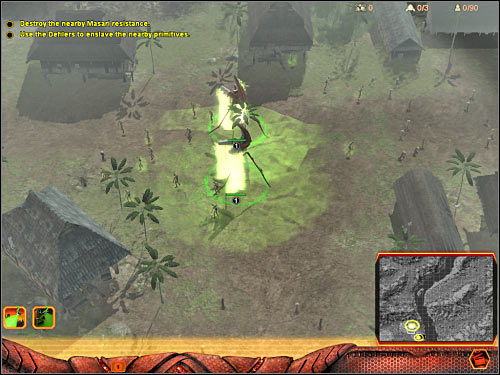 Once you're ready, select all available Slave units by double-clicking on one of the monsters. After that, send them south. Obviously you will have to order your army to attack Masari forces. You shouldn't have any problems performing this action and it's not going to take too long to eliminate enemy troops. Leave the Defiler units in the village in order to turn everyone into a zombie.

This is going to be a very simple objective. The generator can be found near the killed Masari units. Your slaves should destroy it, however the Defilers have probably cleared out the village by now, so they may also proceed to the south. Destroying the generator will allow you to activate a bridge which leads to the eastern sections of the map. 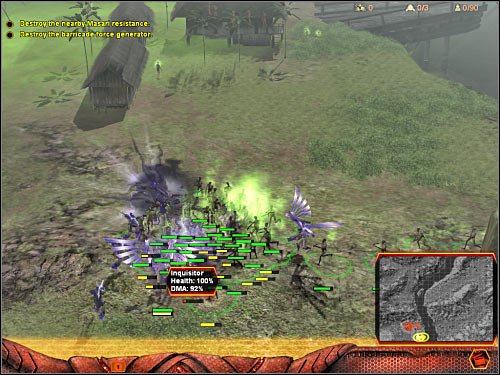 You won't receive any specific orders at the moment, however it's not a problem. Select your Slave units once again and order them to go east. Your zombies will have to take care of a Masari turret, called a Guardian (screen). Now you may consider sending them north in order to disable the second turret. You'll probably lose your units somewhere around here. Don't worry about it, because there's a second village in the area. All you have to do is to allow your Defiler units to get there. You've already destroyed the turrets, so they won't get attacked. Activate the Bleed Mode and start turning new civilians into zombies. 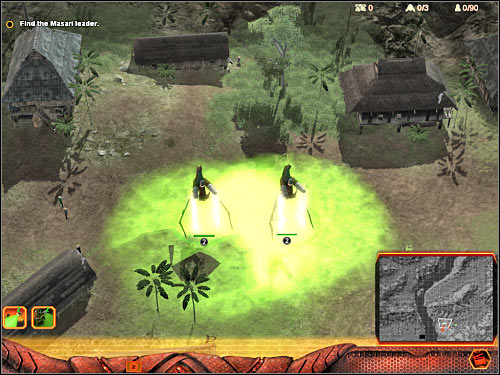 I guess it should be fairly obvious that you must gather a new army. Doing this will allow you to disable the third Guardian turret which can be found to the east. Once this is done, send your Slave units to the north-east. Your allies will come across several Masari units along the way. It's going to be fairly easy to get rid of enemy troops, especially if you decide to choose Defiler units for this battle (screen). You should receive an information that you'll be rewarded with reinforcements. Order your Defilers to stay put. As for the Slaves, send them over to the landing site area, because they'll die eventually and you'll at least kill a few other Masari units while they're still alive. Don't worry if you lose your entire army. Go back to the Defiler units and wait for the reinforcements to arrive. 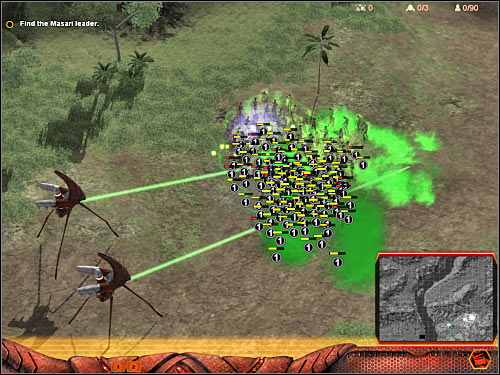