Keep firing at the upper arms of the Hierarchy Walker. Eventually they should explode. It's going to take some time, so you must be patient. Make sure that your units aren't standing too close to the Walker, because they would have been crushed by its huge legs. Try maintaining a safe distance. It shouldn't be a problem, as long as you move back the units by yourself. Once you've destroyed the arms, you will have to focus on disabling the shields - Left Shield & Right Shield (screen). You may have some problems finding the correct hardpoints, but it's very important that you start weakening the shields. 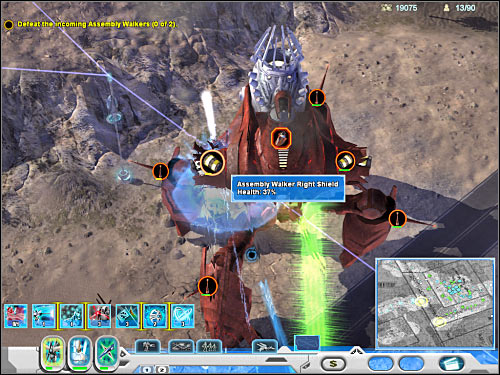 Obviously you will have to disable both shields. It shouldn't be too difficult, especially since they can't withstand too much damage. Make sure that all of your units are aiming at them and it'll only take a few seconds to destroy them. Doing this will allow you to expose the main core of the Walker (screen). This is the final phase of this battle. Order your units to start firing at the core. Destroying it will also neutralize the Walker. MOVE BACK your units QUICKLY. I would recommend ordering them to go back to your base, so they'll be able to team up with your newly manufactured units (I assume your factories were creating new units to replace the fallen ones). 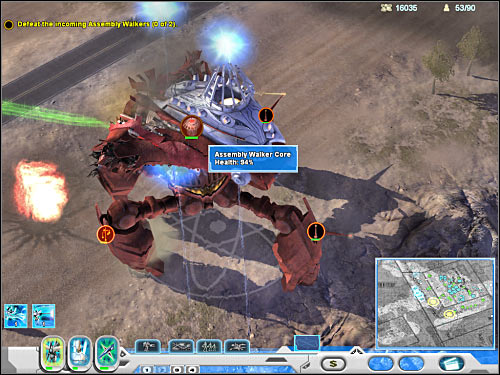 It's very important that you destroy the first Walker before the other one manages to get too close to your base. Otherwise it would have been able to destroy some of your main buildings and obviously you'll need those for later. Watch out especially for your factories. If one of them gets destroyed, build a new one as soon as possible. Thankfully, you won't have to worry about your power grid, because you wouldn't be using it anyway. Don't waste your time trying to repair the towers or trying to build some new ones. Gather everyone together and order your units to proceed towards the second Walker. This is going to be a very similar battle, because both Walkers were of the same type (Assembly). Start off by aiming at the upper cannons in order to prevent the Walker from damaging your units. Once this is done, destroy the outer arms completely. Walker shields are next. Once they're gone, focus on destroying the core of this Hierarchy unit. Make sure that your factories are building new tanks, however allow them to stay near the base. Destroying the first group of Walkers won't solve the problem, because a second group will arrive here shortly. You will have to attack the new Walkers almost instantly, without being able to plan your next moves or to expand the base. 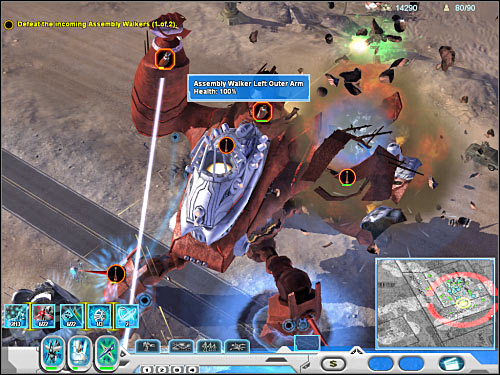 I guess it won't be much of a consolation to you if I say that neutralizing the second group is going to be easier, mostly because you will be dealing with weaker Walkers, built mostly for production purposes. Nevertheless, you shouldn't ignore them, because you'll still spend a lot of time trying to prevent them from reaching your base. Thankfully, you will be allowed to expand your base by constructing new buildings. Increasing the number of factories should be your top priority. You can also consider building a research center. This would allow you to manufacture stronger units and to buy several interesting upgrades in order to increase your chances of defeating the Walkers. You should especially consider manufacturing Assembly units, because they're very effective against slow targets. I would recommend that you start off by attacking the southern Walker (3 on the map), because it has appeared closer to your base. 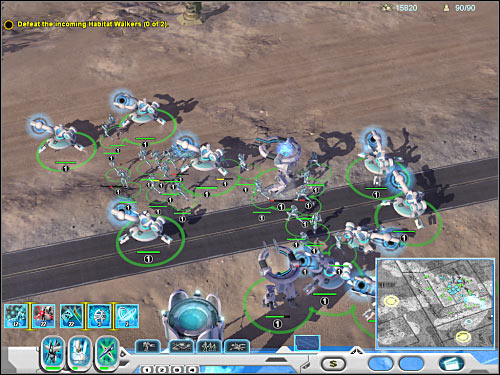 It's going to get a little easier to take down Habitat Walkers. Just as before, you will have to watch out for your units, so they won't end up being smashed to pieces. Try focusing on the side panels of the Walkers. This should allow you to expose their cores without having to wait too long (screen). Obviously destroying the core will allow you to take out each Walker. Make sure that you've rearmed yourself after the first fight. The second Walker should be far away from your main buildings, so you'll have plenty of time to get everyone together. Use similar attacks to destroy the second Walker. Once this is done, move your ENTIRE army to the south. Don't wait for the game to display a new objective. As for your newly manufactured units, I would recommend stationing them to the west of the main buildings. You will have to leave a small group there, because your base is going to be attacked by smaller units and the AI controlled tanks are probably gone by now. 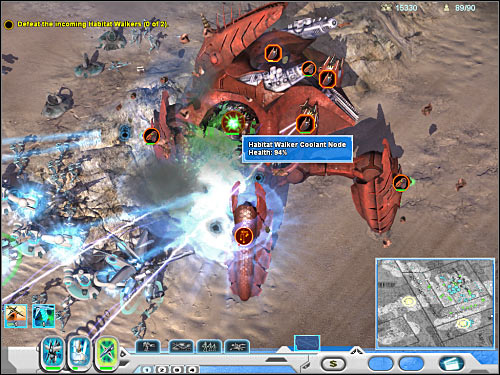