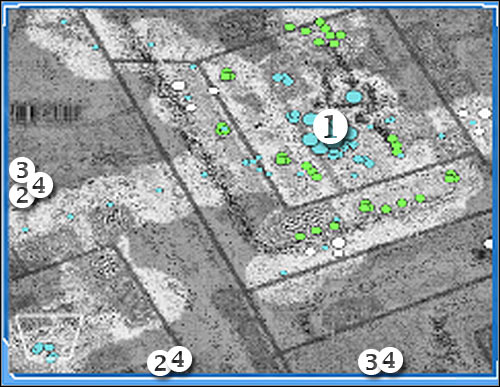 2 - areas where Walkers from the first group will appear (Assembly Walkers; first objective)

3 - areas where Walkers from the second group will appear (Habitat Walkers; second objective)

You will have to defend Novus base against MASSIVE enemy attacks. You won't be dealing with standard units. Instead, you will have to take out SEVEN Walkers. They will arrive in three waves.

This is the final mission of the Novus campaign. As you've probably suspected, it's going to be difficult. This may come as a surprise, though, because some of the previous missions of this particular campaign very extremely easy and didn't require you to act in a lot of hurry. You will have to make quick and accurate decisions. Having a steady flow of new units will also be very important, because your starting units are going to die (sooner or later). It's also extremely important to keep your main heroes alive. Losing any of them is going to be equal to an instant failure. Once you've regained full control over your units, you will only have 30 seconds to prepare for the arrival of the first wave of enemy Walkers. As you've noticed, Vertigo has automatically picked up Mirabel using its Upload ability. Move back all of your units to the main base. You may consider allowing Mirabel to go back to the battlefield by choosing the Download ability or you can wait with this decision for the first battle to commence. Right now you should focus only on preparing for the enemy assault. 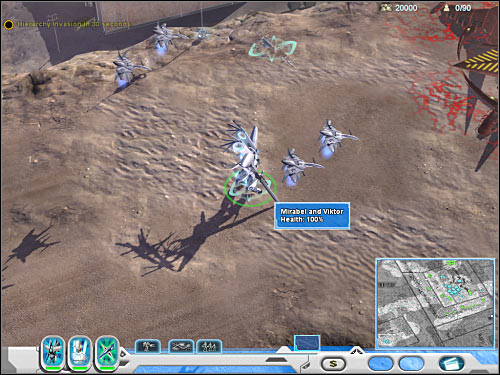 You should notice that your base has automatically been fitted out with a Robotic Assembly building. This isn't enough. Find your Constructor units quickly (screen) and order them to build at least TWO Vehicle Assembly factories. It's also very important that both factories begin manufacturing new tanks as soon as possible. You won't have to construct more advanced units. Assembly Tanks will do the trick. Start gathering them somewhere to the west of your base. You should also order your main characters to remain there. You're going to need to build a decent army in a very short period of time. 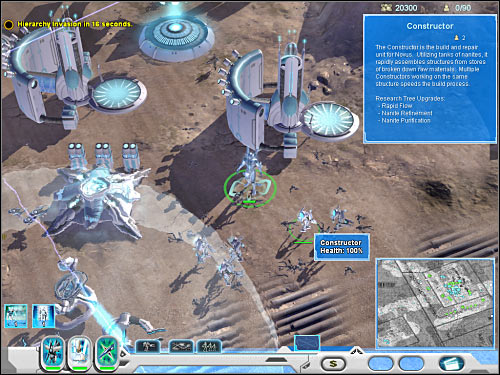 You should receive your first objective in just a few seconds. You'll also notice that two enemy Walkers have arrived in the area (2 on the map). This means you will have to act quickly, because they won't stop at nothing. Instead, they are moving continously towards your base. I would recommend taking care of the western Walker in the first place, because reaching your base is going to take it less time. Order your army to leave the hill and wait for your troops to get closer to the position of the Walker. 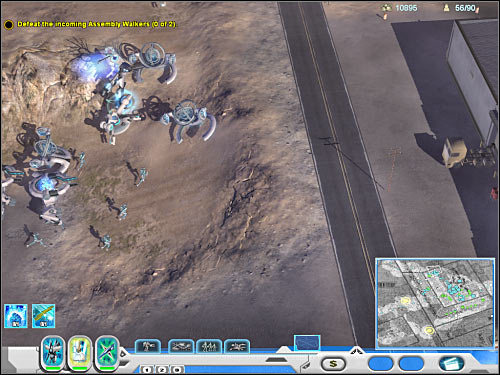 Defeating both Walkers is not going to be simple, mostly because their armors can withstand a lot of damage. I would recommend that you start off by aiming at the upper arms of the first Walker, because that's where its main cannons can be found (screen). Once you've destroyed both Mass Driver Cannons, try aiming at the outer arms (the left one, as well as the right one). Make sure that your units have focused their attention only on these components. You will also have to watch out for your main characters. You can't lose any of your heroes, so if you notice that they're losing on health, send them back to the base. You should also consider manufacturing new units to replace the destroyed ones. I would recommend building only tanks, because you wouldn't achieve much by creating weaker robots. 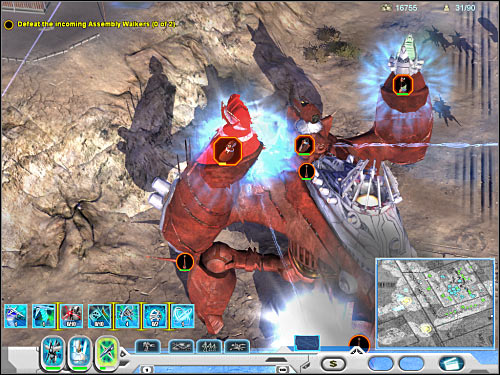