Third objective: Protect the Home Portal at all costs

Fulfilling the second mission objective won't be too difficult, because the villages will probably be attacked by only a few enemy units and your foes won't try to take out all of them (3 on the map) at once. As a result, you should take your time planning the counterattack, especially since no one's assaulting your base at the moment. Destroying enemy units would on the other hand attract the attention of the main group of Hierarchy forces. Try building a huge army with a little help from your existing structures. You can consider building new factories, however it won't be necessary. When you're ready, order Mirabel to attack enemy units in order to save at least one village (screen). Once this is done, move back your hero to your base and get ready to defend this area against enemy attacks. 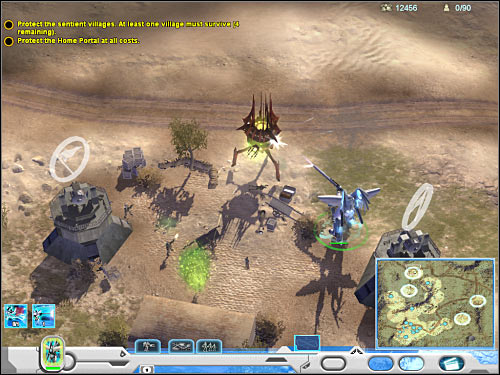 Enemy units will appear to the north of your base. Just as before, you should consider dividing your forces into two separate groups. I assume you've built a portal somewhere close to the western edge of the map, so you will have to place more allied units there in order to ensure its safety. The rest of your troops should be standing to the north-east of the base. Prevent enemy units from getting too close to your buildings. Brute and Grunt units will probably try to take out your Recycling Centers. You can't allow them to do that. It would be a good idea to surround these structures with force fields (Field Inverter) even before the battle has started. Once you've dealt with all enemy units, you will receive a warning that a Walker is heading your way. 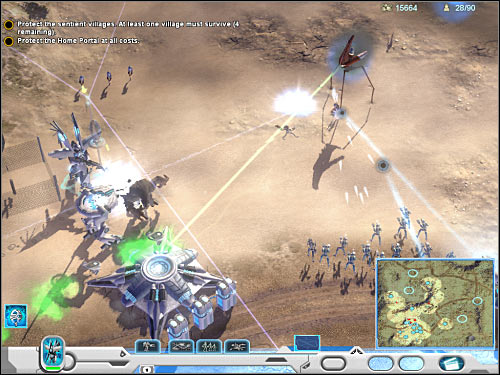 The Walker will appear near the northern edge of the map (4 on the map). I wouldn't recommend going there right away. Instead, use the fact that it's moving very slowly and get ready to defeat it by building additional units. Obviously you should try to reach the maximum population cap by manufacturing tanks and robots. Attack the Walker once it's close enough to one of your hydraulic pumps. You've been there before, so you should know where it is (screen). Send everyone you've got, including Mirabel. Only a small group should be left to defend your base, however you don't have to worry about being attacked at the moment. 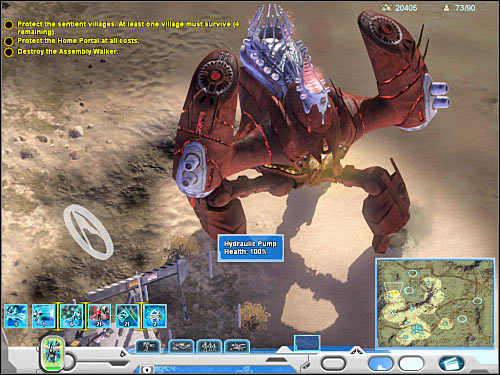 You had an opportunity to destroy a Walker before, so you should still remember what has to be done in order to get rid of this threat. Start off by attacking the legs of the Walker in order to weaken it and to disable some of the plasma guns. Make sure that all of your units are focus on that specific targets. You should also try to replace them with new troops being manufactured in your factories. Now you will have to focus on the upper arms of the Walker, as well as its front panel (screen). Once it's destroyed, two shields are going to be exposed (left shield & right shield). Disabling those will make the Walker totally vulnerable to your attacks. Aim for the core and you shouldn't have any other problems destroying this Hierarchy unit. Once this is done, move back everyone to your base. 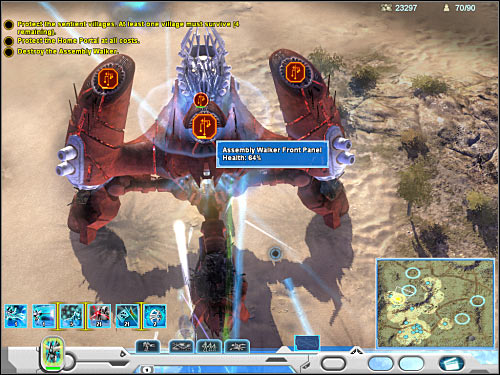 Fifth objective: Destroy the Hierarchy base

Your main objective will be to destroy some specific buildings, however this is equal to taking down an entire Hierarchy base. It shouldn't be too difficult, especially since your enemy won't receive any additional reinforcements and you won't be attacked by a surprise. Obviously you will have to make sure that your army is strong enough to proceed with the assault plans. Start moving north-east, because that's where you'll find the Hierarchy base. You will encounter a few enemy units along the way, however killing them should be fairly easy. I would recommend attacking the base from the south. This will allow you to destroy Spitter turrets a lot faster, because you'll be attacking one turret at a time. You should also focus on destroying designated structures and units. Glyph Carvers are among your targets. 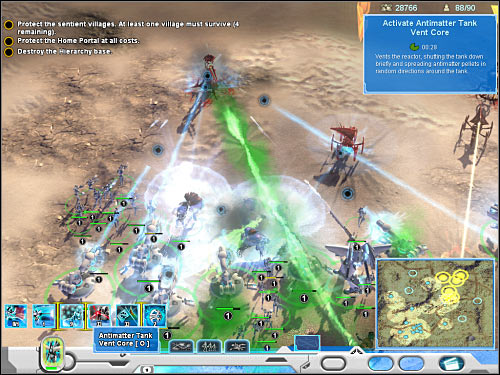 There are three targets in the lower section of the base. Don't move towards the northern target (6 on the map), because it would be better to leave it for later. Instead, move north-east. You should also consider ordering new units to get here, so they'll replace neutralized members of your army. You shouldn't have any problems collecting and spending resources at this point of the game, so you should be able to perform these actions instantly. Now you will have to destroy the main building of the Hierarchy base (screen). Once it's gone, target a nearby Detection Drone. Resupply once again, because you'll have more problems destroying the final target. 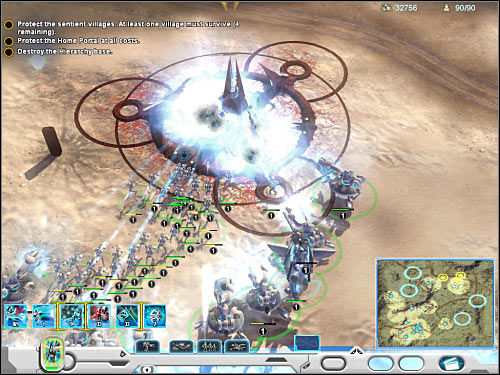 Head on to the final target. It turns out that it's a second Walker. Obviously you will have to destroy it in order to succeed. Nothing will change here, so you should start off by aiming at its legs in order to neutralize the plasma weapons. After that, aim at the front panel and at some of the attached pods. Your objective will be to expose the core of the Walker. Attacking it will allow you to neutralize this threat. Once the Walker has been destroyed, this mission will come to an end. 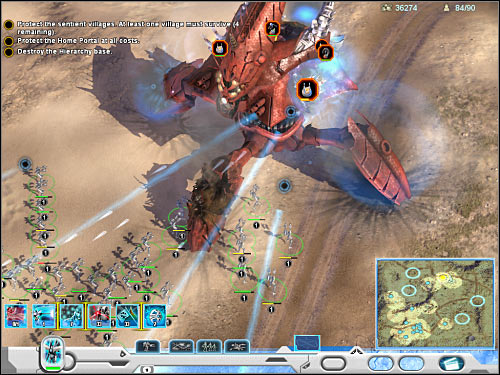