The largest group of alien creatures is going to approach the military checkpoint from the north. You'll be dealing mostly with Grunt units. The easiest way to get rid of the monsters would be to throw a grenade at them (screen) by using colonel Moore's special ability. Now you'll only have to deal with the rest of the Hierarchy units. Once this is done, allied soldiers will automatically join you. Add them to your main squad. Thankfully, you won't have to worry about them too much, because you'll receive reinforcements in about 60-120 seconds (depending on how fast you're moving to the capitol building). 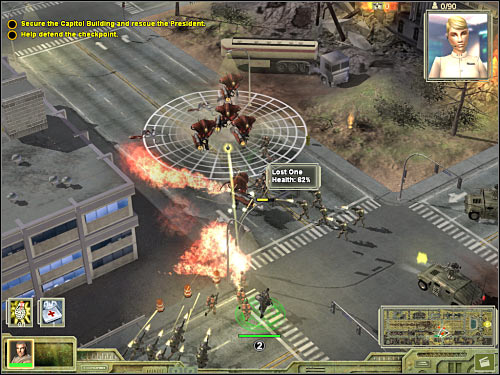 As you've probably noticed, you won't be allowed to go east, because the main road was destroyed. Instead, you will have to head north. Start off by neutralizing new Grunt units. They will approach this area from north and north-west. Once they're gone, focus all of your efforts on destroying an alien turret (Spitter Turret). Keep moving north, however you'll have to turn north-east at some point of the game. Once again, you will be dealing with very small groups, so it should be fairly easy to move on. Allied gunships will appear on the map, however they are going to be shot down by alien saucers. Sadly, you weren't able to prevent this from happening. Start moving east. Eventually you will come across several Reaper Drones (4 on the map). Destroy these units. Don't worry about the outcome of the battle, because you'll be rewarded with reinforcements. A small group of allied tanks is going to join your army. Use them to get rid of the alien threat and wait for additional reinforcements. Gather everyone around Moore's position. It would be a good idea to divide your units to several groups. 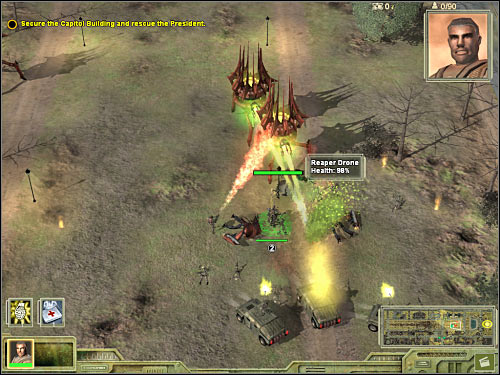 Make sure that your army is moving east. Sadly, your troops will come across a huge cloud of deadly radiation. As a result, it won't be possible to get to the capitol building by moving in a straight line. Instead, you will have to go south-east. You should receive a warning that new monsters have appeared in the area (screen). You will be able to see them if you zoom in the view on the southern building. Get ready, because Brute units will attack your soldiers. This isn't going to be an extremely difficult fight, however you must watch out for their bodies, because they'll explode. Don't worry if you lose the soldiers. Instead, try saving most of your tanks. 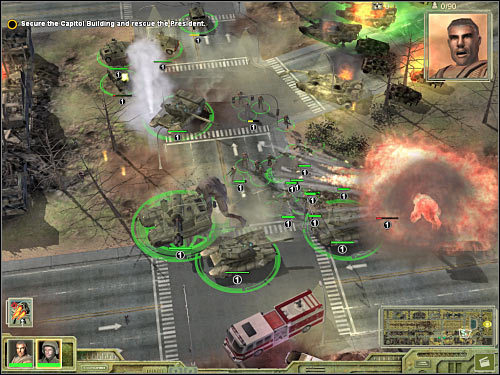 Once the monsters are gone, start moving east, however you will be allowed to turn to north-east. This will allow you to get closer to the capitol building. Keep moving towards your final destination. Obviously you will come across several Hierarchy units along the way. The last group (screen) is marked with a yellow arrow and it's guarding the entrance to the capitol. Use your tanks and your main character to deal with the monsters. Once they're gone, you will be rewarded with a very interesting cut-scene. 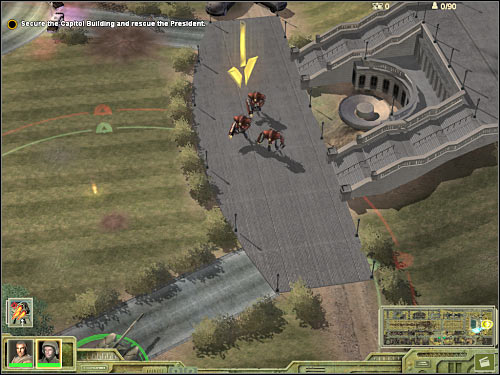