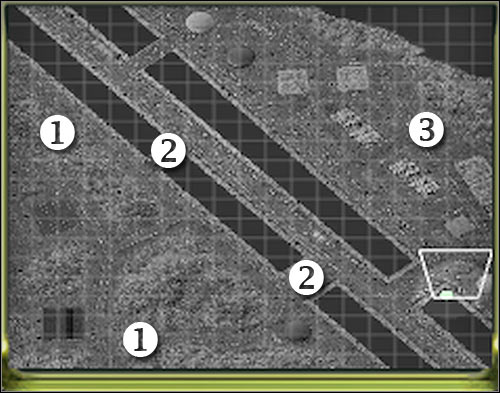 1 - best locations to set up a new base

2 - bridges leading to the eastern section of the map

You will have to set up a new base and prepare an army in order to be able to proceed with the assault. After that, you will have to advance towards enemy base. Your objective will be to find and destroy Origin Core building.

Theoretically it might seem that this is a very similar mission to your previous assignments. You won't be rewarded with any specific mission objectives. I can assure you that it won't be easy to win here. You will have to defend yourself against massive enemy attacks right from the beginning of the mission. Thankfully, you won't have to neutralize all enemy units. Your primary and your only objective will be to destroy the central structure of the Hierarchy base. It's going to be an Origin Core building. Doing this will allow you to proceed with the final mission of the Masari campaign. You'll start the mission inside an allied ship. I would recommend that you take your time to explore the surroundings, because you'll be allowed to reload the mission. Take a closer look at the bridges, because you'll have to use them to get to the eastern island. They'll be your only way to reach the goal area, as long as you'll be using ground units. Enemy has set up his base near the eastern edge of the map, so you should go somewhere to the west. I wouldn't recommend trying to build your base somewhere near enemy positions, because you would have to deal with constant attacks and you may be even attacked by an enemy Walker. Take a look at my map and choose one of the recommended landing sites. The northern landing zone is much better, because there's only one bridge in that area, so it's going to be easier to fight back against enemy attacks and you won't have to divide your army into smaller groups. Try getting there as soon as possible. Unload your units and start building primary structures (Citadel & Matter Engines). 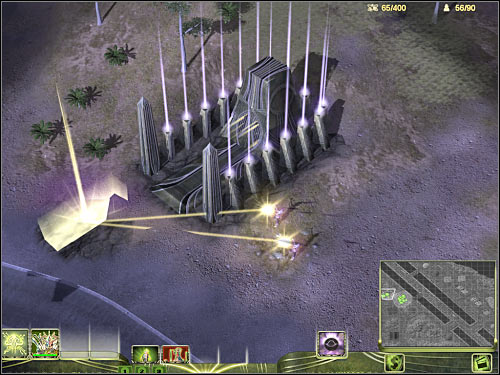 You should remember what has to be done in order to ensure a safe expansion of your base. I will only tell you about additional problems that you'll have deal with in order to win. I assume you've decided to switch to Dark Energy mode. The only exception would be if you had some Inquisitor units at your disposal. I suspect you only have Conqueror tanks, so you may as well protect them with better shields. You will also have to construct a Skirmisher Portal building (screen) in order to be able to defend the base against enemy air attacks. This has to be done almost right away, because your enemy will try to attack you flying saucers. You'll only need a few Disciple units to attack the saucers and eventually they should return to the Hierarchy base. Just make sure that you're selecting these targets for your Disciple units, because they may not be able to take out the targets on their own. Don't worry about Monolith units and don't waste your time trying to prevent them from scanning your base. You will also have to take interest in defending your buildings, because your enemy will use ground units to attack you. Focus mostly on killing Brute units, as they're capable of inflicting serious damage. You will have to prevent them from getting too close to your buildings. Also, keep shooting at Defiler units, because they'll be able to poison your units with deadly radiation. 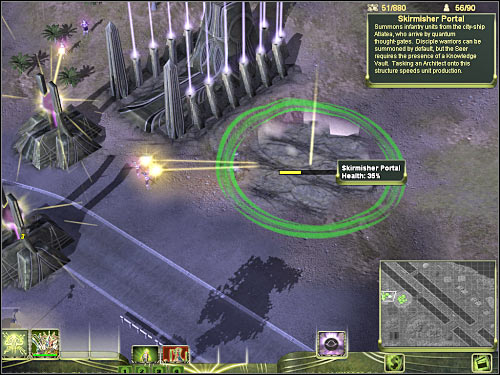 Obviously you will have to start building your army. Just as before, I would recommend buying a lot of Conqueror tanks. You should also consider constructing several Sky Guardian towers in your base. You will have to place them to the east and to the south-east of the main buildings, because that's where enemy units tend to show up. Also, don't forget to purchase Matter Controller building and start charging your superweapon. Now you've got two choices - you can either build a few turrets or you can leave 3-6 Conqueror to protect your base. As for the rest of your army, start moving it to the east. Cross the first bridge. Be careful, though. There's a military turret here and it's probably occupied by Hierarchy forces (screen). Destroy it and wait for the superweapon to charge itself before you decide to get closer to the Hierarchy base. 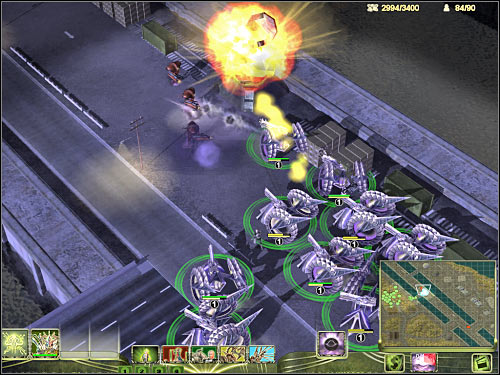 Depending on where you've decided to start the game, you will be attacking the Hierarchy base either from the north or from the south. You should be on a look out for additional enemy units along the way. Eliminate mostly Defiler units, so they won't be able to poison your troops once you've begun the attack. Get closer to the Origin Core building (3 on the map). Once this is done, use your superweapon to weaken it and to neutralize all nearby Hierarchy units (screen). After that, switch to Light Energy mode and start firing at this building. Remember to move back your main character if he has suffered major injuries. You shouldn't have any major problems destroying this building. Doing this will allow you to win the mission. Get ready for the final challenge! 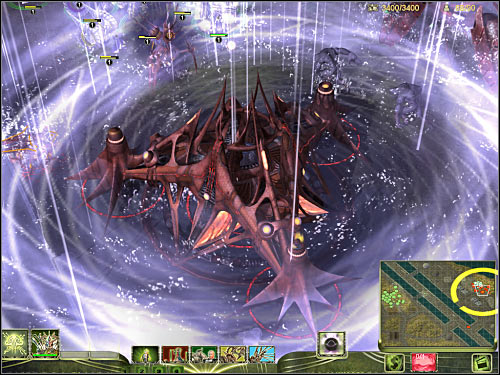