I've already said that all these secondary missions are very similar to each other, mostly because you'll always be going for the same thing and you'll have a lot of time to prepare your final assault. Here's an example of what you should do. I've picked North Africa for this presentation. You will be able to get there after you take control over Congo or Sahara.

Every secondary mission begins the same way. You'll be commanding a Masari space ship. This plane contains all your units, including your main character (Lord Charos) and his strike force which you have picked earlier. I wouldn't recommend losing too much time while trying to find the best landing site. Usually you're starting the mission in a safe area and you will only have to locate a larger field to set up the base. I would recommend choosing the corners of the map, so you won't have to worry about being attacked from more than two directions (or even one - if the enemy base is near your position or if the alternative route leads nowhere). You should also consider switching your default setting, so you'll rely on Dark Matter. Your final preparation should be to choose options from the technology tree. At first you can only pick one technology, but if you buy specific global buildings, you will be allowed to purchase more technologies. As for your choice, the Dark Energy branch seems to be the most useful one, especially if you can only develop the first level. The choice is yours, however don't spend too much time trying to decide what to buy. 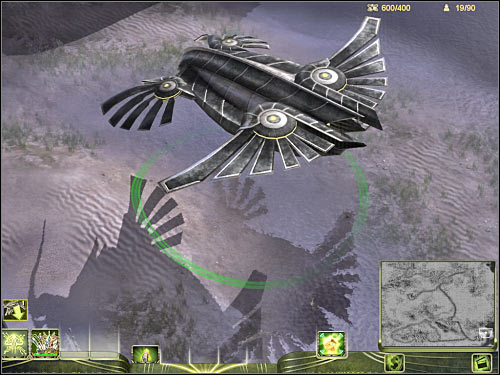 Land and wait for your units to leave the plane. I would recommend moving your hero as well as his army to the front, so he'll be able to engage anyone who tries to get close to your buildings and construction units. Choose architects and start building a Citadel. Otherwise you wouldn't be able to expand. Once you've built a Citadel, construct several Matter Engine objects. This will allow you to start gathering much needed resources. It would also be wise to recruit two additional Architect units. You can order them from the Citadel. Divide your architects into two separate groups (two of them for each group). New architects should also focus on building as many Matter Engine structures as possible. You will have to prepare for an initial enemy assault. If you didn't spot any flying saucers or monoliths, stay with the Dark Matter. Otherwise switch back to the light version, so your Inquisitior units will be allowed to fly. Thankfully, it should be quite easy to defeat enemy forces. Just make sure that your main character has taken on most hits, because he can regenerate himself. 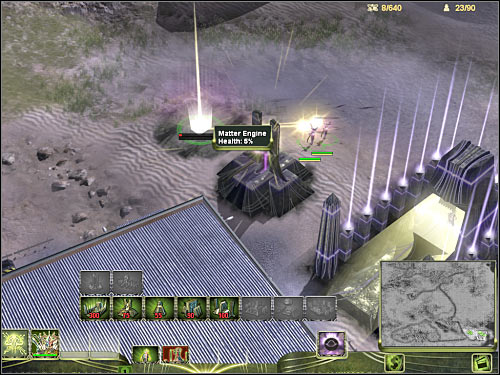 Try building at least 6-8 Matter Engine structures before you decide to place something else. You will have to buy more Matter Engines once your base has expanded. The buildings from the first set may be built close to each other, so you won't have lose too much time trying to plan where to place them. You will have to do this while buying them in the future. If your Inquisitor are grounded, try building a Skirmisher Portal as soon as possible. Once this is done, recruit 10-15 Disciple units. It's very important, because they'll be able to attack flying saucers and monoliths. You should also consider purchasing a Knowledge Vault. Buying both upgrades (Ancient Knowledge & Forbidden Knowledge) for this building is equally important. Obviously you should place the Knowledge Vault somewhere far away from your troops, so it won't get destroyed. 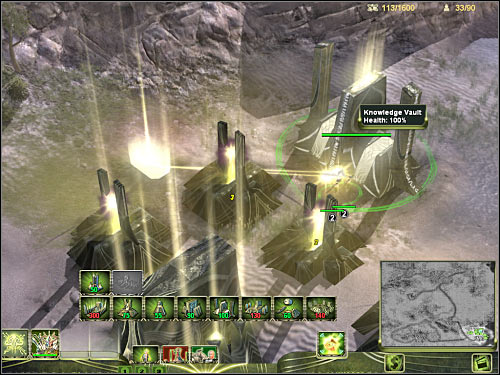 You won't have to buy a lot of Guardian turrets unless your base is being attacked from several directions. If enemy forces are coming only from one direction, you will only have to place your units correctly, so no one gets close enough to your main buildings. As for Sky Guardian turrets, you will have to purchase a few of them no matter what you plan on doing next. I'm sure that you know by now where to expect enemy attacks. Sadly, you won't be able to prevent enemy Monolith units from scanning your base. I would recommend buying a Machina structure as soon as possible. Doing this will allow you to manufacture Conqueror units (only if you've already built a Knowledge Vault). Place them near your troops (screen). I would also recommend buying an Oracle building and upgrading it at least once. Doing this will allow you to find out where to look for your enemy. This is important if you don't want to scout the entire map searching for your opponent. 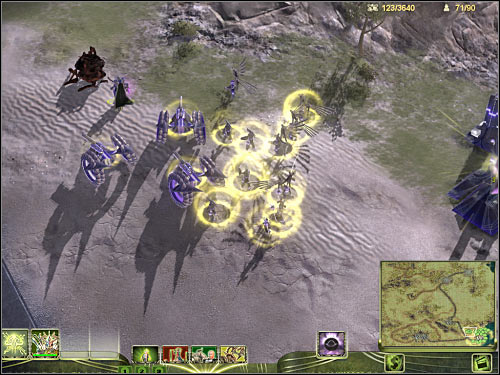