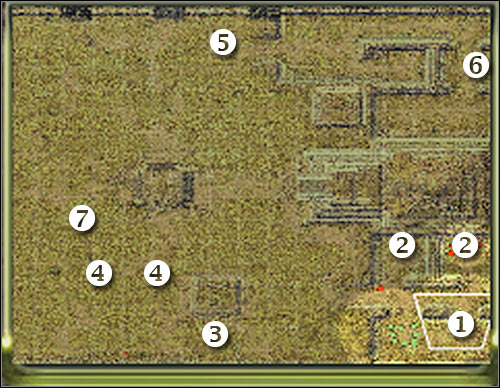 7 - area where a second Walker will appear

Important! I'd strongly recommend that you to go back to the main menu of the game. Open the Tutorials section in order to find out more about the Masari race. You will have to see two movies - Masari Architects and Masari Light/Dark Energy. The second movie is much more important. You will have to understand the differences between light and dark matter. It'll be crucial to your success, especially later during the course of this campaign and while playing skirmish battles.

You will have to assist prince Zessus and his loyal followers, so they'll be able to escape from the prison compound. Once this is done, you will have to rebuild a nearby Masari base in order to build a large army. You'll have to use your newly acquired units to rescue the final group of prisoners. You will also have to take out two Hierarchy Walker units.

This is the introductionary mission for the Masari race, however finishing it is not going to be easy. You'll have to construct a lot of buildings. Assuring their safety is going to be equally important. You start the game inside the prison compound and your first objective will be to escape this facility. You're able to command only two units - prince Zessus and one of his followers. This is a simple Disciple unit. Obviously keeping Zessus alive is more important. I would recommend switching to Dark Energy by clicking on a button on the HUD. This will allow your faction to rely on the dark matter, instead of the light version. Doing this will increase your defensive capabilities, mostly because your units will receive an additional armor. This armor gets more powerful over time by consuming energy from nearby objects. Head on to the north. You will have to kill a few Grunt units. It shouldn't be too difficult. 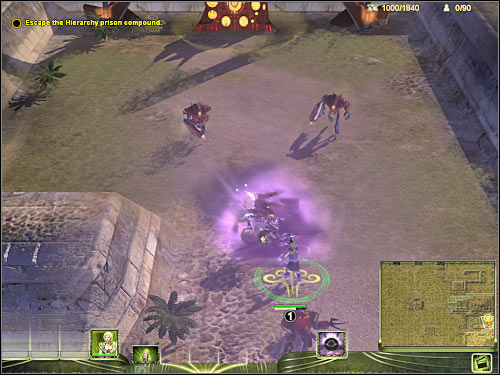 Once you've successfully killed all Grunt units, get closer to something that looks like a control panel. It can be found to the north (2 on the map). You won't have to press anything. The second set of force fields is going to be shut down automatically. Start moving south-west in order to assist your new allies. Try moving some of them away from the alien creatures in order to allow prince Zessus to take care of the Hierarchy forces. Similar to other heroes, he can heal himself and he won't lose too many health points here, so his life won't be in danger. Once you've taken care of a new group of enemy units, head on towards the second switch (screen; 2 on the map). Using it will allow you to turn off the main force field. Exit the prison complex by moving west. Soon you'll receive a new mission objective. 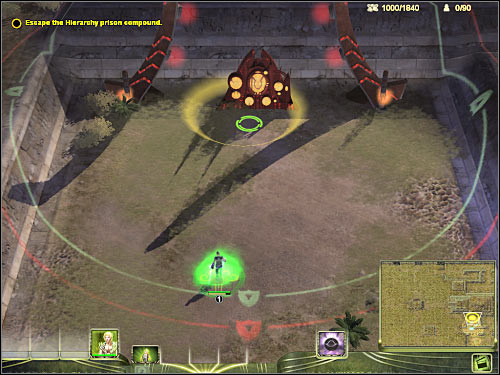 Second objective: Build a Matter Engine with your Architect

Now you'll be allowed to rebuild the unactive Masari base. Before you decide to place any new structures, try repairing some of the buildings which are already here. Start off by repairing objects which can be found near your characters, in the eastern section of the base. There are a lot of Matter Engine structures here. Obviously you will have to use specific units in order to for these tasks to be fulfilled. Find and select Architects. You were able to find out more about them from one of the tutorial movies. Use them to repair several structures. You should also repair the main building of the unactive base. It's a Citadel (3 on the map). Once this is done, purchase three additional Architects and divide them to equal groups. Now you should consider moving your units to the west, because enemy flying saucers may appear there. Your Disciple soldiers will be able to attack air units, so make sure that they've taken care of the saucers. Otherwise these Hierarchy units would be able to destroy some of the unrepaired structures. This isn't a massive failure, however you would have to spend more time building them by yourself. 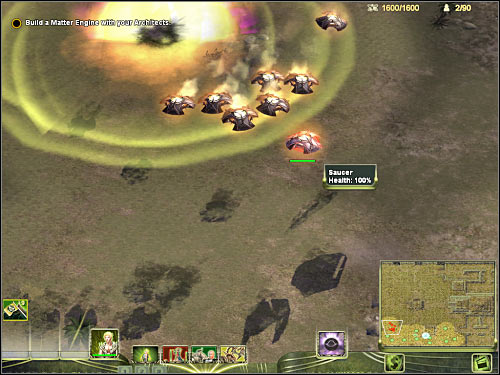 You should take your time to familiarize yourself with the layout of your new base. You'll also be given a lot of hints, so make sure that you've read them all by clicking on specific icons. Your Architects should try to repair all of the remaining buildings. You've probably lost a few structures during the saucer attack, however the central area of the base is probably intact. As for your troops, place them to north-west of the Citadel building, because that's where Hierarchy forces will appear every 30-60 seconds (screen; 4 on the map). You should also begin recruiting new units. You can do this by clicking on the Skirmisher Portal building which has probably survived the initial enemy attack. You can only build Disciple units at this time, but it's not a problem. Place your new units somewhere near your existing army. Your main hero (prince Zessus) should also be standing there. You may also allow him to move forward a little, because he can't withstand a lot of injuries. Once you've repaired the base, select two Architects and build a new Matter Engine by choosing it from the lower menu. Take a closer look at its operating range. You will have to place these buildings everywhere, not close to each other. Don't worry, because you'll be allowed to build up to 20 Matter Engines, so you won't have to worry about losing one of them or not having enough resources. 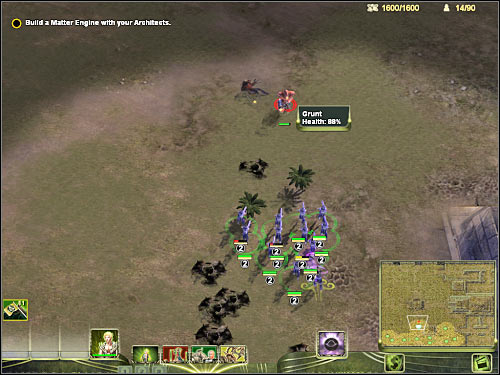