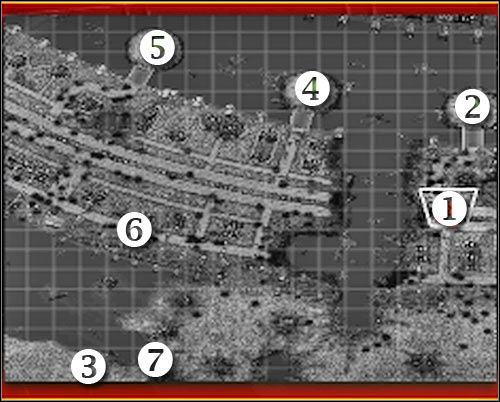 3 - area where reinforcements will show up

Once you've landed safely on board of an enemy mothership, you will have to find and destroy three transmitters. You'll also take out a few Masari buildings in order to prevent your enemy from calling reinforcements. The final phase of the mission will require you to get to the extraction zone safely, without letting your main character die.

Just as before, you should take your time to familiarize yourself with the surroundings. You should also notice that you've been rewarded with a new type of units. They are called Defilers and I'm sure that you remember them to be tough opponents from the Novus campaign. This time you'll be able to command them. It shouldn't come as a surprise that these units can be quite helpful. You should take a closer look at their abilities, because they're very useful. Thanks to Project Radiation you'll be able to increase your firepower. This is good against slow targets and enemy structures. Bleed Mode is also quite interesting. Activating this mode results in a cloud of radiation being created around your Defiler units. The cloud will increase in size over time. Choosing this ability not only will allow you to poison your enemies, but also to heal your own units. The only disadvantage of using the Defilers is that they've been equipped with a very weak armor, so it's easy to lose them if you're not careful enough. I wouldn't recommend ordering them to attack every enemy unit. They should stay somewhere in the back, especially since you'll be allowed to send other units (including Orlok) into battle. 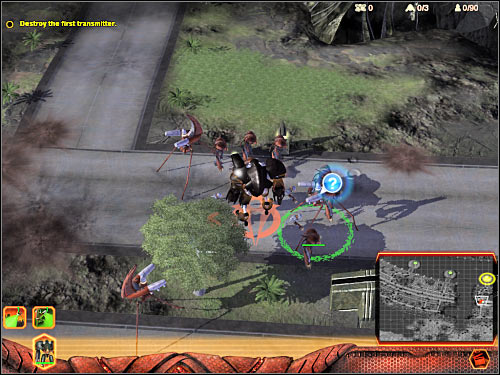 Your primary goal at the moment will be to reach the first transmitter which can be found to the north of your current location (2 on the map). Try sending only your main character Orlok there. The rest of the troops should stay somewhere near the start area. Alternatively you could send a few units to assist Orlok, however he has to do all the dirty work. You'll encounter a few Masari units in just a few seconds. Those are weak Disciple units, so getting rid of them shouldn't be a major problem. You could also attack them from a distance using some of the Defiler abilities, however it won't be necessary. Proceed to the first transmitter. This object will be guarded by a small group of Masari units. Kill them and order your troops to attack the transmission tower (screen). This is a well armored object, so destroying it may take a few seconds. Thankfully, the tower can't protect itself and you won't be attacked by anyone else. 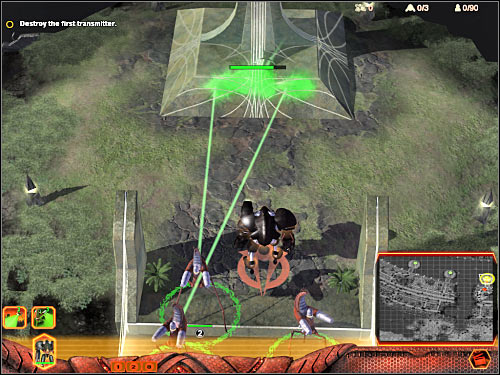 Now you will have to go south. That's where you've started this mission. Sadly, you won't be able to get to the second transmitter by going in a straight line. Be careful, because once you've returned to the starting point, you will have to deal with a larger group of Masari units. Allow your standard troops to take part in these fights. Just make sure that your Defiler units don't lose too much health. You'll need for most of them to survive. The only passageway leads to the south. After that, you will have to turn west. You'll encounter some additional enemy units along the way. Killing them shouldn't be a problem, however watch out for surprise attacks (screen). You are going to be warned about them and you should be very careful, so you won't lose too many units by a mistake. Defend your Defilers at all costs. Allow your other troops to take out enemy units. Obviously Orlok also should engage enemy troops. 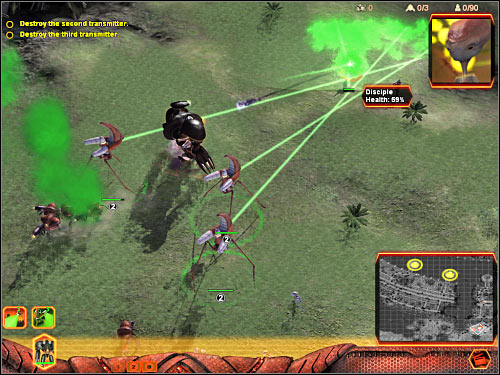 Once you've arrived at the southern section of the map, you will have to turn right in order to proceed west. You'll soon be informed that other allied units were able to get on board of this mothership. As a result, you will be allowed to wait for them to show up. They will arrive to the west of your current location (3 on the map). You've got two choices here. You could try and leave your allies near the extraction zone, however I would recommend ordering them to rejoin with your main squad (screen). Make sure that your army is heading their way, so it won't take forever for both groups to team up. Your new allies are going to be attacked by enemy troops, however they will be fine as long as they reach your main army quickly. Once this is done, deal with the Masari forces. Now you will have to proceed north-east. This will allow you to reach the western areas of the ship. Be careful, because this new section is going to be defended by a large group of Masari units, including one Conqueror. Wait for the game to display a new mission objective. It's important, because you'll have to deal with this new threat right away, before proceeding to the second transmitter. 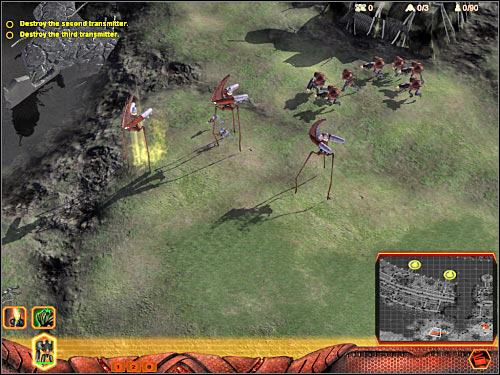