On this page of our treasure guide to Uncharted 3 Drake's Deception you can find valuable information about all collectibles available in chapter 8. As you explore the fortress, you will come across seven different collectibles. Some of them cannot be reached personally and must be shot down first.

After the first climbing sequence you will enter the bridge [1]. On the right side there is an area fenced with a low fence [2]. 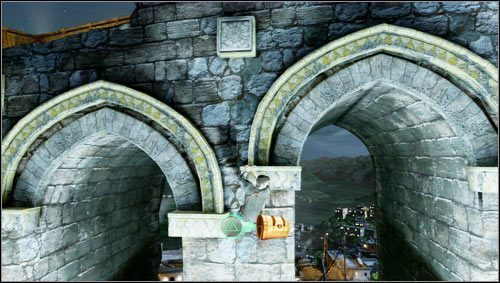 Jump over the small fence and go down into the arches. Climb to the right and find a treasure [1] lying at the beginning of the second arch. 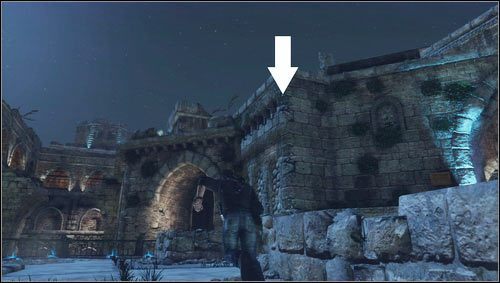 After the first skirmish with the enemies, you will lower a drawbridge with Sully. After walking through it, stop and look up and a little to the right at the walls to spot a treasure [1]. To get it, you have to shoot it down and pick it up. 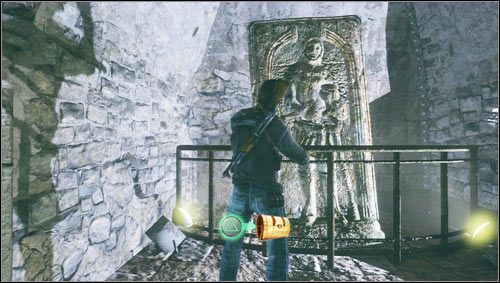 After crossing the drawbridge you have to destroy a padlock in the metal gate (shoot at it). Just behind it turn right and approach the statue where you will find a treasure [1]. 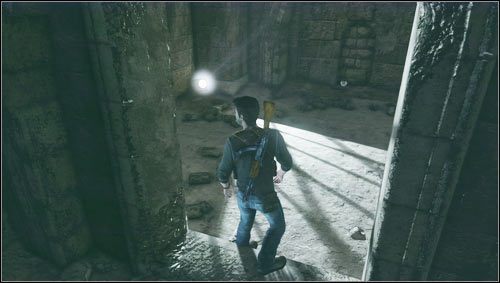 After riding down by using the bucket of the well move forward and eliminate the first group of opponents. On the left, in a small room illuminated by a lamp [1], you can find another treasure.

Soon after you reunite with your friends and take part in a battle you will stand at the entrance leading to the tower [1]. On the left side of the wall located at the height of the gate (through which you have to pass) there is a small white figurine [2].

To get it, you have to shoot it [1] so it may fall to the ground. Return to the previous location (move down) and collect the treasure [2].

After crossing through the metal gates [1], which you have lifted with Charlie, go to the other side of the round room to find a treasure [2] lying on the windowsill of a small window.

At the end of the chapter, as soon as you locate three columns through the telescope, you have to take part in a larger battle during which Sully armed with a missile launcher will help you. After the battle, squeeze through the hole in the wall [1]. As soon as you go through it look right to find a treasure [2].