On this page of our guide to Uncharted 3 Drake's Deception you can find a detailed walkthrough of the final chapter - Chapter 22: The Dreamers of the Day. The title of this chapter is The Dreamers of the Day. During this level you have to take part in various battles with common enemies. Also, you will have to watch out for the collapsing elements of the whole construction. In this chapter you have to defeat the final boss of the game - Talbot. Our walkthrough explains how to avoid boss attacks and how to win the final confrontation.

Travelling through the city 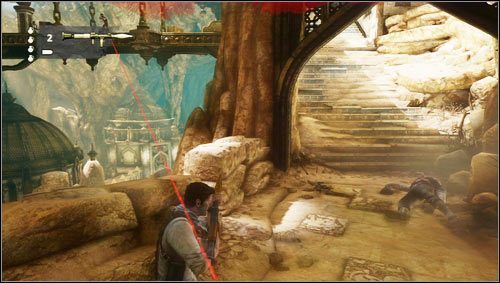 Climb the stairs on the right towards your enemies. After jumping next to the waterfall, you will have to fight. Hide from the snipers - use the cover on the left and fire at enemies coming from above [1].

Enter the tower [1]. Once inside, go to the left, towards the bridge, where you will encounter another group of opponents. Wipe them out, cross the first bridge, bypass the tower [2] with the lever in the middle and cross the second bridge.

This is how you'll get to the tower, where Sullivan is located [1]. Follow him to the previous tower and activate the lever [2]. 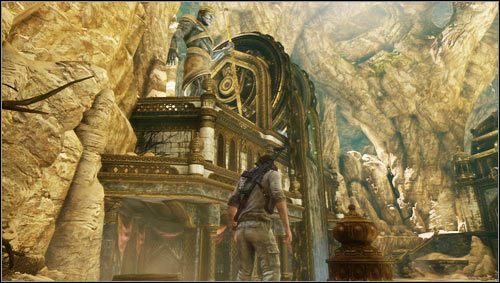 This way you'll be able to move down to the water pumping machine [1].

Walk under it and then go up the stairs [1]. Open the closed gate by using two levers [2].

In the room with a snake statue [1] you have to jump down and start a series of short fights with small groups of opponents standing in your way [2].

While fighting Marlo's soldiers you run along some gear wheels [1]. Don't forget to avoid grenades and sniper's laser sights. After getting to the chamber with three heads [2] carved in the wall you have to carefully run down the stairs leading to the surface. 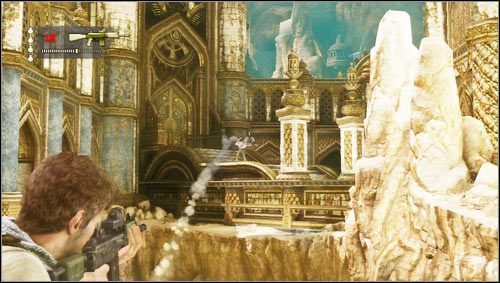 As soon as you're outside, more enemies will attack you. The most dangerous opponent is a bandit armed with a grenade launcher who shoots at you from the bridge on the left [1]. Take him down as soon as possible, or go back to the building and get rid of the heavily armored enemy.

After you eliminate all enemies, run into the building in front of you and kill some opponents on the left, including a sniper lurking on the bridge. Carefully leave the room through the two arches [1] in front of you. If you go out on the bridge you may get hit by a rocket. By leaning slightly out of the building, kill all enemies lurking on the roof. They are armed with a rocket launcher and a sniper rifle [2].

Once outside, get rid of two more enemies, and take the stairs leading to the cave [1]. At the top of the stairs you once again have to fight with enemies. After that, approach the metal trunk [2]. 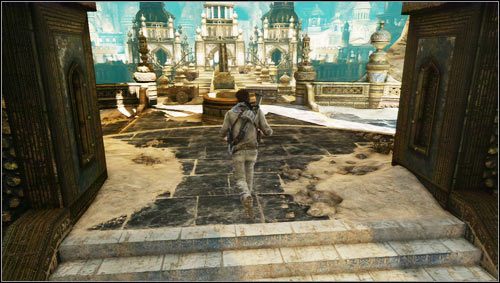 After you learn more about your competitors' plans, open the gate with two levers and go left to a wide bridge with cog wheels [1]. 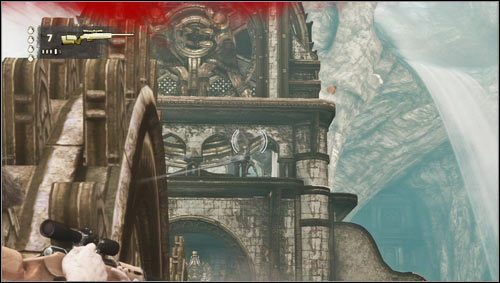 After a long cut-scene, everything is going to collapse and you will have to run away from the lost city. As soon as you gain control over Drake, kill the nearest enemy, take his sniper rifle and eliminate the opponent with a rocket launcher, who's lurking on the tower at the end of the bridge [1]. From now on, you have to break through the bridge and hide behind consecutive covers or obstacles.

At the end of the bridge you have to run straight under the tower and activate an elevator [1]. Use the latter to reach the higher level. Kill a few enemies and go to the right to find a ladder [2] - climb it to get to the upper floor of the tower.

Run to the other side of the ledge and climb the wall from which you can get to the blocks that move up [1]. Use the blocks to get to the higher floor. Kill all enemies but watch out for a bandit equipped with a rocket launcher who shoots at you from the bridge [2].

Climb to another blocks that move up. Jump on the higher floor of the tower and climb the ladder. While running on the nearby stairs you have to defeat all enemies [1]. Then, continue climbing towards the room with spiral stairs [2].

After Marlo's death you run after Sullivan up the winding stairs [1]. After you get outside, continue to follow Sullivan and jump on the stone ledge [2]. 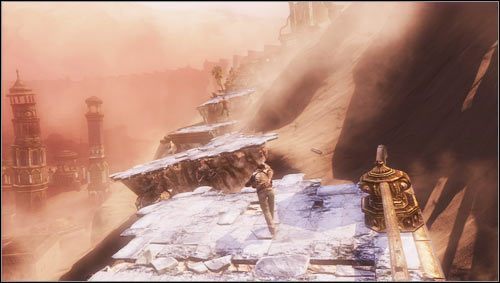 Everything around you will start to crumble and collapse. You will have to jump from one platform to another [1].

Duel with the final boss (Talbot)

Not far from the exit of the lost city you will run into Talbot once again. You will have to fight a duel with him [1]. Just like in the case of other important battles or encounters, focus on countering the attacks and breaking out of grabs [2]. Also, try to stick to the middle of the arena. Fighting near the edge can be risky and dangerous. If you fall off a stone ledge, you will hang on the edge of it and have to avoid Talbot's kicks or otherwise you may die.

Sullivan will join the fight. Unfortunately, Drake will suddenly fall off the ledge - you have to climb it [1] in order to help your companion. Being almost at the very top you will see that Talbot is trying to kill your companion with a boulder [2]. Then, you have to pull out your gun and shoot Talbot! 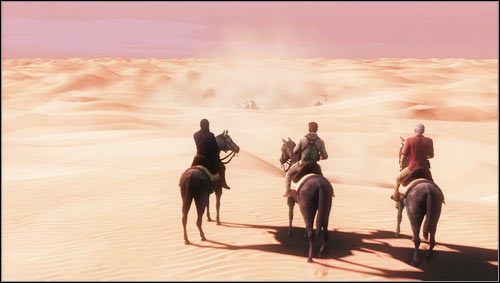 After winning the duel, jump up to reach Sullivan and escape from the city that sinks in the sea of sand [1].