On this page of our guide to Uncharted 3 Drake's Deception you can find a detailed walkthrough of Chapter 20: Caravan. The title of this chapter is Caravan and it begins with a horse ride. The main hero has to reach the title caravan consisting of vehicles with numerous opponents. Nate has to jump on subsequent vehicles and avoid enemy attacks. The final part of the chapter takes place during a sandstorm and after defeating the thugs you will reach the great gates of Atlantis of the Sands. 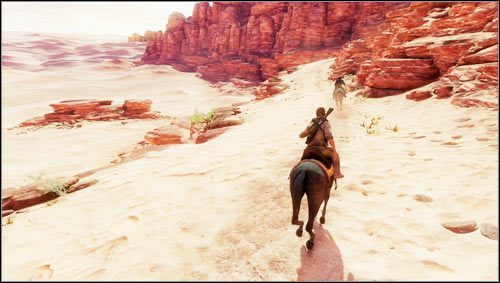 Together with your new companion you set off [1] on horseback to capture the Marlo's caravan.

Follow your companion and ride through a narrow canyon to encounter a convoy moving below [1]. After riding through another narrow passageway, you have to descend from the rocks and get behind the enemy convoy [2].

Firstly, get rid of the opponents firing at you from the vehicles' trailers and then jump on the truck on the left [1]. Replenish the ammunition and kill the bikers in front of you [2].

Jump from a truck to a horse running next to you [1]. Then, move through consecutive convoy vehicles. You can jump into another truck [2] to get more ammunition, but you don't have to. All you have to do is kill the opponents that defend these vehicles.

By jumping on several convoy vehicles, you will finally encounter an enemy armed with a rocket launcher [1]. Kill him and jump into his truck. You will find a large supply of rocket launchers. Use these weapons to destroy two vehicles (armed with armored turrets) which move in front of you [2].

Because your truck will be on fire, mount your horse and chase the rest of the convoy entering a narrow canyon [1]. After entering the pass, you will be knocked down to the ground. You companion will help you [2]. 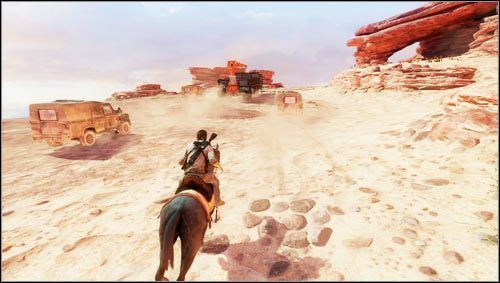 Soon you'll catch up with the convoy and jump back on your horse. Destroy more vehicles just like you did before. Do that to finally reach the beginning of the convoy [1] consisting of several jeeps and a crane.

Sullivan will emerge from one of the cars. After a short brawl, he will jump on a truck with a crane. When a bandit attacks him [1] you have to ride up near the crane and jump on it to take care of the stronger enemy [2]. 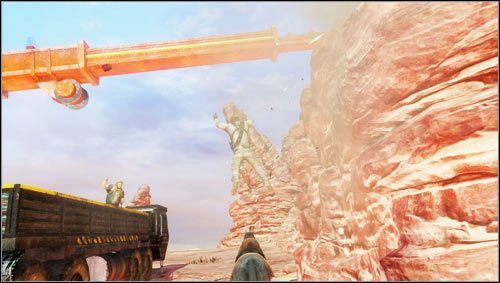 After a short fight, you will land on the crane's arm and hang outside the vehicle [1]. As soon as your loyal steed rides up, jump on it to avoid a collision with the rock.

Together with your companions you will ride into a sandstorm and get lost. After releasing the horses, you have to head on. You will encounter Marlo's men [1]. The first serious obstacle will be a bandit armed with a heavy machine gun [2]. Kill him immediately by using grenades or run away from him by eliminating other enemies in the run and finally confront the thug in a one-on-one duel.

Then, you will move through a destroyed wall [1] and get to the area of the next battle [2]. The main problems here are two armored cars and enemies on the hills armed with sniper rifles, rocket launchers and grenade launchers.

Whatever you do, don't stick to the middle of the square, cause you'll be attacked from all sides. At the beginning, it's best to go to the right side and take care of an armed bandit who is hiding on the ruins of a small building [1]. Kill your opponent, climb up to his position and take over the rocket launcher to destroy armored cars [2].

Then, move to the left side of the arena and kill an enemy equipped with a grenade launcher [1]. Follow the flying grenades to find his position. Pick up the grenade launcher and use it to smash down armored vehicles or to quickly eliminate heavily armored enemies. Once you get rid of the main threats by avoiding the central part of the arena, eliminate the snipers [2] and kill the rest of Marlo's men. 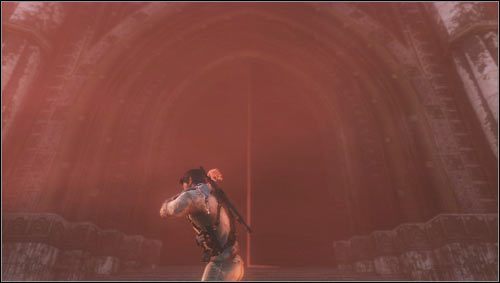 After the fight, move along the vehicles of the convoy and reach a huge gateway [1]. 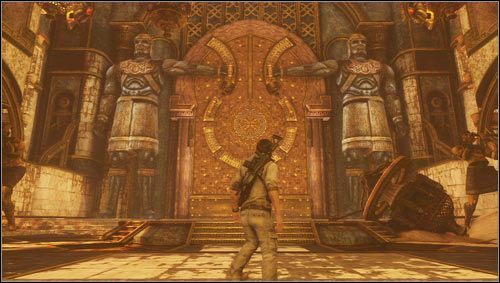 When you squeeze through the gap, go up the stairs to enter a spacious room with a closed gate guarded by two statues [1].

On the wall, on the right side of the room, you will find a ladder [1] - climb it. You'll find a lever under a burning face [2]. Press and hold it, but the gate won't open until you activate the second lever.

To do so, jump on the moving blocks on the right and use them to move up [1]. Jump on the ledge behind the Drake's back and make a jump at the wall towards the wooden beam [2].

After landing on the next stone ledge, climb on the wall and stand on the wooden beam. Approach the end of the beam and jump on the chandelier on the left [1]. Jump from the first chandelier to the second one, and then once again on the ledge with the second lever [2]. 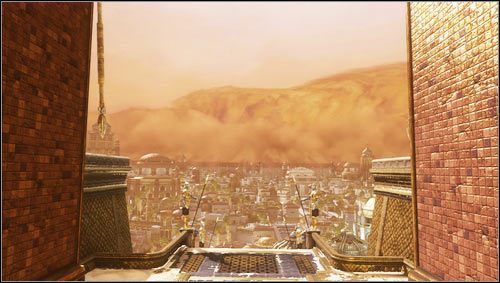 After activating the second lever, the mechanism will open the gates to the Atlantis of the Sands [1]. 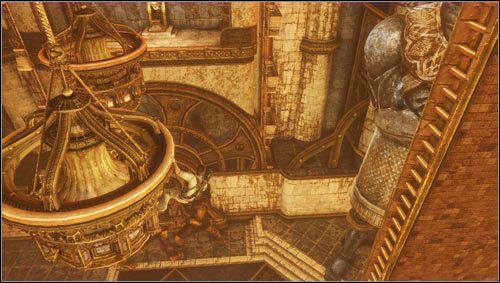 In order to get down on the ground, you have to jump back on the first chandelier and then on the second one. Move left a bit and then jump on the door [1]. Then jump down on the floor.