On this page of our guide to Uncharted 3 Drake's Deception you can find a detailed walkthrough of Chapter 19: The Settlement. The title of this chapter is Settlement and it is located in the desert. This does not mean that Drake won't meet anyone during the stage. Enemy mercenaries will appear in the abandoned town. In the later part of this chapter, the main character can mount a horse and must destroy the gate to get out of the settlement. 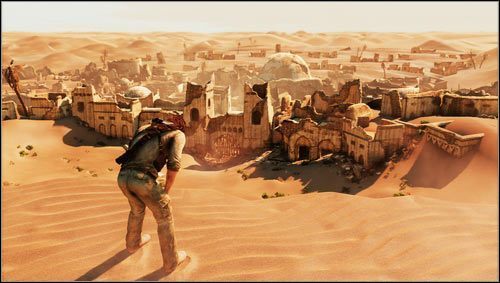 Due to lack of other options go down to search the abandoned city [1].

Run to the gate [1], and then head to the ruins of the building on the right. Use wooden rungs to climb higher and jump through a hole in the wall [2].

After a hard fall, leave the room to reach a well [1]. Jump in and squeeze through the gap to find a puddle [2].

Continue on, you'll come across a wooden door [1], which must be smashed down to end up among Marlo's people [2]. Because you don't have a gun, you need to find a weapon as soon as possible. To do this, attack a nearby enemy with bare hands and collect his weapon.

After defeating a small group of enemies, proceed to the left side of the square [1] and eliminate another wave of enemies. After you handle them, turn right at the end of the street and kill a few enemies who will break through a wooden gate [2]. 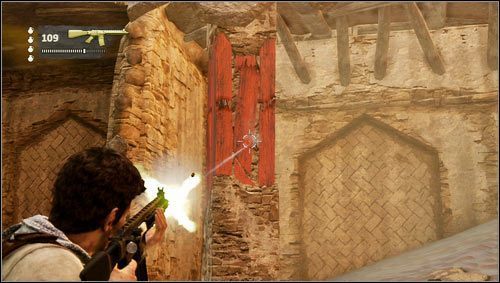 After you move through the gate, Marlo's man will run up and destroy the pillar that supports the floor you're currently standing on. This way, you will fall into a closed pit. To get out of there, you have to destroy the column supported by red boards [1]. This way you will reveal a climbing wall that can be used to get out of the trap.

Run up the stairs and eliminate the enemy. At the top, kill a soldier with a sniper rifle and then take his position. You will get to the beginning of an alley [1]. Soon, this area will be swarming with enemies. Hide in a convenient shooting position and eliminate all enemies. After a few kills, more opponents will arrive (stronger ones).

First of all, eliminate a bandit armed with a rocket launcher [2] lurking on the buildings on the right side of the street. The next in line are heavily armored enemies equipped with a shield - they will quickly advance to your position. If you can't handle all of them at once, then you have to retreat to the building behind you. This will protect you from enemy troops positioned on the roofs.

After the battle cross the street [1] and squeeze through a narrow gap. Jump over the railings [2] after you enter the terrace. 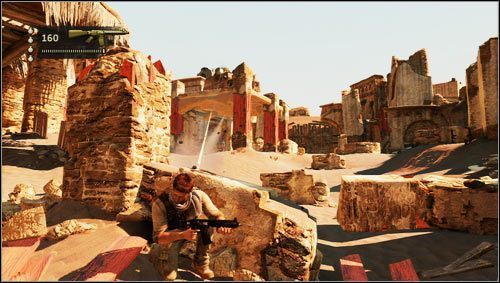 Soon you will take part in a much larger battle [1]. Its main attraction will be an armored vehicle with a turret, parked on a roof supported by columns covered with red boards. First, get rid of the vehicle by destroying these columns. Use a few grenades to collapse them. 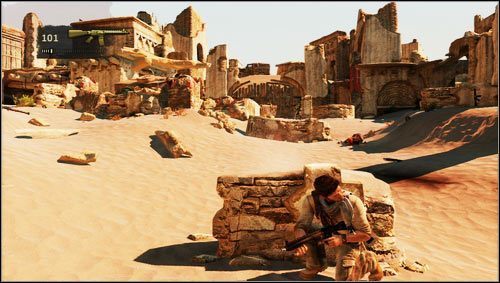 Apart from a large number of opponents assaulting your position, you have to confront bandit equipped with rocket launcher. He will fire at you while standing on a jeep parked on a hill behind the gate [1]. In order to get rid of the aggressor, shoot him with a rifle or send a rocket at the vehicle he is standing on (more or less in the middle of the square you will come across several rocket launchers).

After eliminating all main threats, clear the square and destroy the gate (if it's still there) with a rocket launcher [1]. Move through the gate and go to a ladder [2]. Climb the ladder onto the roof of the building.

The enemy will brutally drag you to the ground. Find some cover [1], and plan how to deal with such a difficult situation. The help will arrive shortly in the form of desert riders. They will mount you onto a horse [2] and try to save you.

While riding on a horse, you have to fire at enemies which are trying to kill you. You will reach a closed gate. At this moment you will lose your riding companion. The horse will carry you to a quiet alley on the right. There, you will get rid of the body [1] and ride the horse alone. Shoot at your enemies while riding the horse until you reach the rest of your new allies [2]. 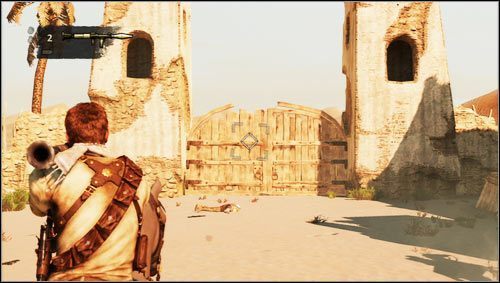 Follow your allies and continue to fire at your enemies. You should pay special attention to snipers and scouts shooting from above. One of them will drop a rocket launcher. Pick it up. Blow up the gate [1] to escape the pursuers by using the acquired weapon.