On this page of our guide to Uncharted 3 Drake's Deception you can find a detailed walkthrough of Chapter 17: Stowaway. The title of this chapter is Stowaway and it has some unique features, because the whole level takes place on board a flying cargo plane. Drake will be forced to take part in fights with other passengers. Ultimately, he will fall out of the plane. Your task is to ensure that he gets a parachute and lands safely. 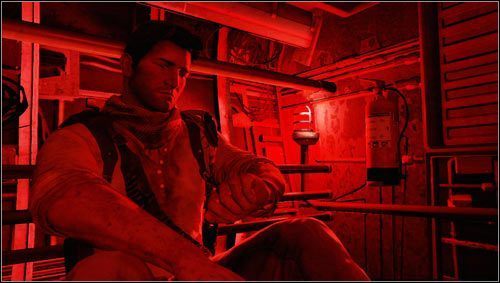 After a few hours of travel in a small chamber above the landing gear [1], it will be time to get out of your hideout and see what is happening on the plane.

While squeezing through a narrow tunnel in the floor - you will be spotted by a bandit. The latter will pull you out and try to throw you out of the plane. As usual, defeat your opponents by properly countering his attacks [1]. Once you have beaten up your opponent hard enough, he will fall to the ground and try to stand up. This is the time when you have to run up to the transported cargo on the left and drop it on your opponent [2].

Unfortunately, the entire cargo of the plane will start to fall out. After a short slalom [1], between the first loads, you will fall out of the plane. At the last moment you will catch a safety net [2]. While under fire from the opponents, climb towards the plane and get rid of the attacker hanging on the net. 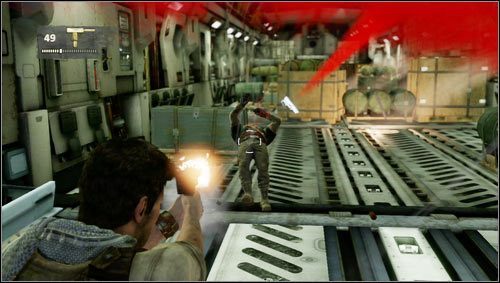 While climbing up, jump on board of the plane and get rid of another enemy [1].

More enemies will emerge from the depths of the cargo hold. Try to defeat them. In the meantime the airplane will burst into flames [1]. After a short while the battle will be interrupted by a hole [2] created due to the explosion. 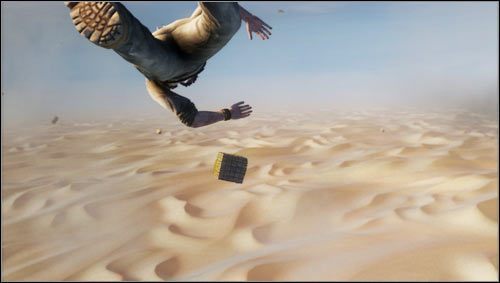 Even if you try to stay on the plane, you'll eventually be sucked outside. Then you have to direct your flight in such a way that after bypassing the plane you can hit a crate [1] and immediately open the parachute that's attached to it.