On this page of our guide you can find the walkthrough of chapter 16of Uncharted 3 Drake's Deception. This chapter is titled One Shot at This and takes place during the night, at the airport. During this chapter, you have to solve environmental puzzles, fight enemies (along with dangerous snipers) and complete a chase stage, during which you have to get on board of a plane. 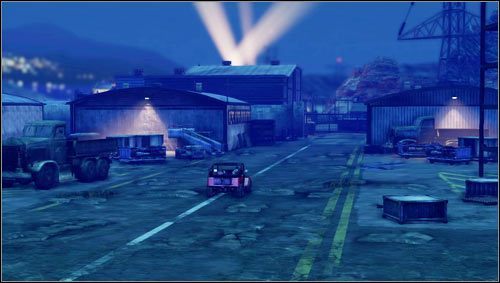 Together with your friend you will drive up to the airport [1].

To get into his area, you need to help Elena lift the metal gates [1]. Once you get inside, go through the boxes on the right to get to other side of the room and climb up to the illuminated passageway [2] leading to the second garage.

Together with your companion, approach the parked car and push it [1] under the open window. Now you have to quickly climb on the car and jump out the window [2] before the small platform goes off the sloping ramp.

Go outside to the left and jump over the fence. Around the corner, climb up to the roof of the garage [1] and run along it towards the airport. You will reach open windows [2], through which you should jump into the next garage (also, killing one of the guards). 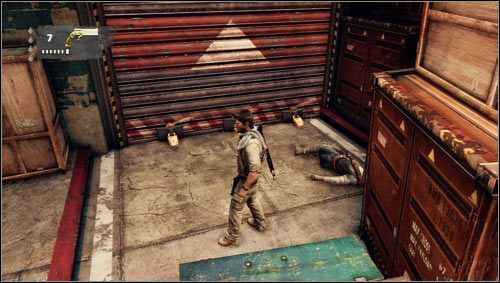 Once you're inside, defeat all opponents and approach the door - you will hear your companion's calls [1]. You have to destroy three padlocks to allow Elena to join you (shoot at each padlock).

A new group of opponents will arrive from the opposite side of the room [1]. Defeat them, and then push the truck [2] in which all enemies have arrived (it stands by a closed gate).

By accident, you'll lose control of the vehicle. Then, you have to get rid of the guards [1] who will arrive after hearing a loud noise. After clearing the area, jump into the garage on the left through open windows [2]. 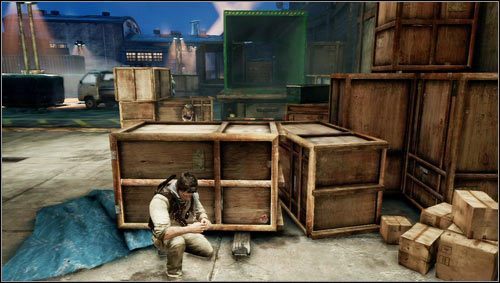 By going to the right you will hit a large square filled with a large group of opponents [1]. After dealing with the first group of enemies it will get much more difficult later on. 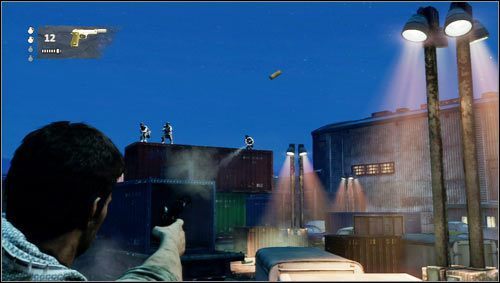 The main problem are the snipers that will spread and take positions on the highest containers. They will be supported by an enemy with a grenade launcher [1] and a heavy armored enemies equipped with automatic shotguns. As soon as you manage to lose enemies for a while by running around the ground, get rid of the snipers hidden behind their cover. Otherwise, you can take shelter in the garage and eliminate the heavily armed and standard enemies. Then, return to the square to wipe out all snipers.

After the fight go to the end of the square and climb up [1] to the roof of the building in front of you. You'll see the plane you're interested in from here [2].

Jump from the roof to the ladder [1] and approach the fence. After a short cut-scene your companion will leave you. Then you have to sneak up to the plane on your own. Unfortunately, an armored vehicle of the enemy will arrive [2].

Climb the buildings on the left and quickly get rid of all opponents standing on your way [1]. Jump from the roof on the containers [2] and further to the ground. 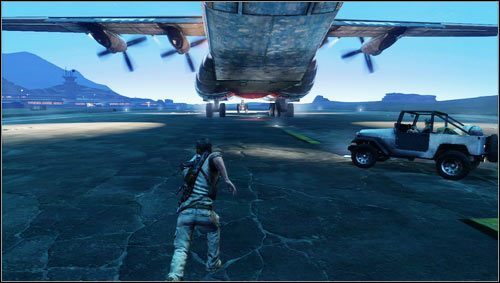 By running after the plane you'll see how your transport starts to move away. Elena will come to help you [1]. Hop into a jeep and chase the plane together with Elena. 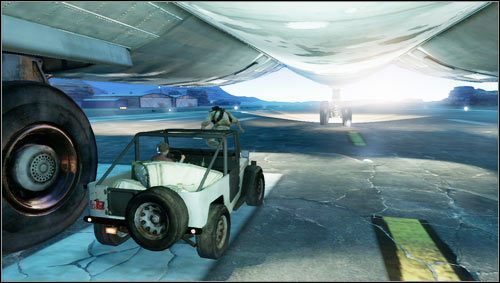 By standing on the front hood you have to control the car in such a way that it drives up the rear part of plane's front landing gear [1]. Just before the end of the runway, you have to jump on a plane and fly away to rescue Sullivan.