On this page of our guide you can find the walkthrough of chapter 13 of Uncharted 3 Drake's Deception. This chapter is titled Rough Seas and its action takes place on stormy waters. The protagonist must once again take part in encounters with numerous pirates, using many weapons found along the way to make the process easier. 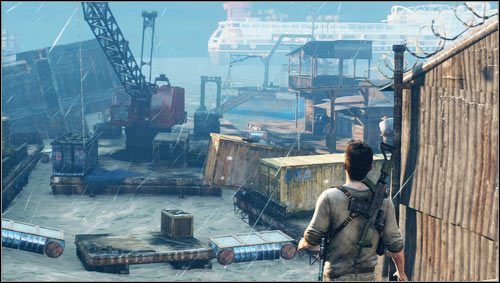 Our goal will be to get to a small ship [1] to which a drawbridge leads. 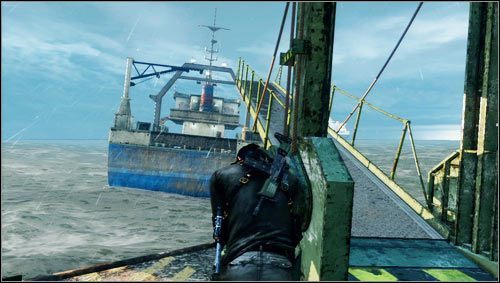 We jump on the bobbing barges and deal with several opponents. Heading forward, we approach the drawbridge and lower it [1].

Unfortunately, we will not be able to get back to the ship and will be forced to deal with several enemies. After the battle, we head towards the wreckage of the ship on which we started Chapter [1]. On the left side we will find a ramp made of metal plates [2], through which we will try to get to the small ship.

The road will yet again be blocked. After a short while we will be washed away by a huge wave [1]. Once we regain control, we quickly run towards the leaving tugboat [2] and jump onto it.

We are not welcome on board and we will be attacked by a group of pirates. The best way to deal with them is to take them out with short-ranged weapons, such as shotguns or pistols [1]. When using this type of weapons, it is advised to get as close to enemies as possible and take shots on the run, without aiming. Once the group of enemies was taken out, a second tugboat will approach us [2]. The pirates located there will set our ship on fire and then approach us by going through ropes. 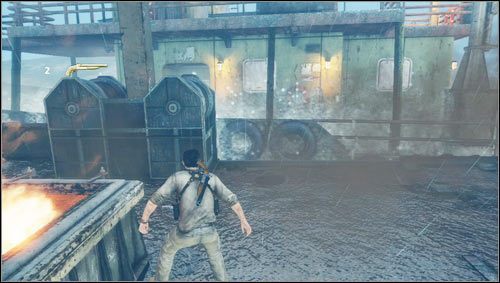 We need to take out the enemies and then jump to the other tugboat [1]. 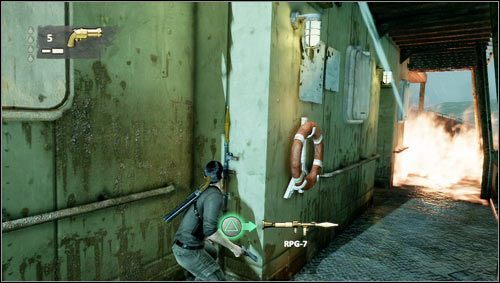 Here we also take out the enemies by using a shotgun. After a short encounter, yet another ship will approach us. Enemies located there will be shooting at us with rocket launchers. In defense of our tug, we grab a rocket launcher - which can be found, among others, at the side of the cabin [1].

Avoiding the incoming missiles, we send several rockets towards the tugboat full of enemies [1]. Once the enemy ship is destroyed, we need to approach the large ship and jump [2] on it before our own ship sinks.