This page of the guide contains the walkthrough of the first part of chapter 12 of Uncharted 3 Drake's Deception. This chapter is titled Abducted and its main objective is to free Nate who has been captured by pirates. During the course of the chapter, the main character has to go through, among others, a ship graveyard. Drake can get rid of some of the pirates silently, but sooner or later will engage in direct combat with them. 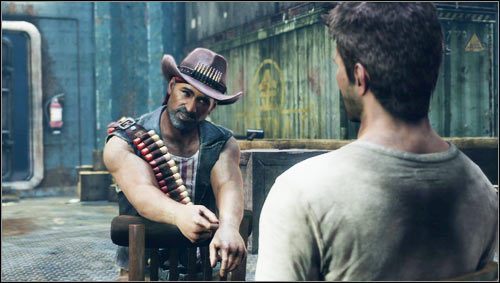 After talking to the pirate businessman, [1] we will be left alone with his subordinates.

We press the Square button at the right moment to free ourselves from the ties and initiate the encounter with the pirates [1]. While fighting near the boxes installed on the sides of the room, we will have the opportunity to take advantage of the bottles and tools that lie on them. This can be done to simplify the encounter with a rather large group of enemies and end it quicker. The climax of the fight will be an encounter with a large-sized muscle head [2]. You need to be especially careful against this foe, as he can knock us down with only a few blows. We wait for his attack, counter it and hit him a few times.

After clearing the room of pirates, we go up the stairs to a higher level [1]. Go to the left and up the packages [2] to reach the beams on the wall. 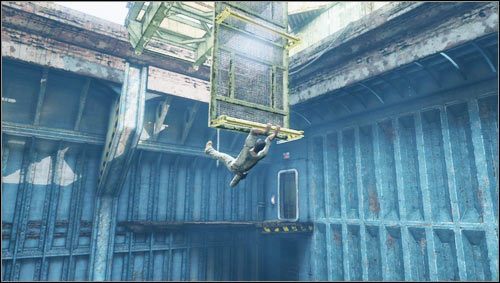 Climbing left all the time, we get on top of the yellow rungs and head upwards to jump onto a hanging platform. When the platform from which we hang [1] breaks, we need to jump forward onto the rope and from there jump towards the open door. 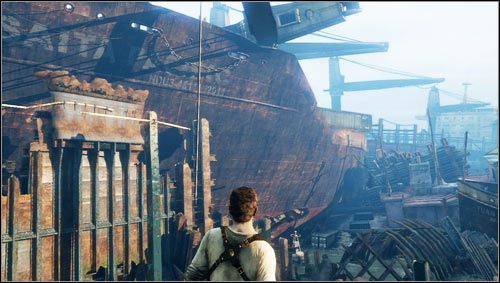 We pass through a narrow corridor and open the metal doors to find ourselves outside, in the ship graveyard [1]. We jump on the hanging rope and from there jump to the pipes on the side of the ship wreckage.

We go left along the pipes and jump onto the anchor chain [1]. We go down into the water and overcome the wall by swimming under water. In the distance we will see a pirate guarding the area. We swim towards him, get out of the water and quietly take the foe out [2].

We follow the ship to the right to see the distant communications tower [1]. Now we go quietly into the water and swim to the platform guarded by two pirates. We climb up the ladder and pick up a weapon. While staying on the ladder, wait [2] for the victim and quietly pull him into the water.

We go up to the platform and take out the other enemy. Next to him we can find a revolver with an optical sight [1], acting as a sniper with a large recoil. On the platform to the right there is also a rocket launcher [2], thanks to which we can wreak havoc in the enemy ranks. At this point, we will have good enough equipment to begin the inevitable battle with a very diverse and very numerous band of pirates. Getting attached to one place is not the best solution. The safest approach is to constantly change your shooting position by swimming underwater from one side of the location to the other.

Special attention should be paid to the pirates mounting stationary armored cannons [1]. In order to get rid of them, you can either sneak up on them to take them out quietly or use grenades and rocket launcher. The next threat are snipers who usually occupy ship towers [2]. They can be recognized by their laser sights and we should hide from them underwater or behind covers. To get rid of the snipers, we can either sneak up on them or use long-range weapons, such as a sniper rifle or a revolver with an optical sight.

Heavily-armored pirates equipped with shotguns will also be attacking us [1]. We should keep as far away from them as possible, which should not be too difficult, as they tend to stay and guard the ships they have driven us from. They will then become easy but durable targets, which is why we should use grenades, grenade launcher or rocket launcher to take them out. At the end of the encounter, enemies equipped with rocket launchers will appear in the area. Due to their inaccessible position, we take them out with a long-ranged weapon or by using the stationary cannon [2]. 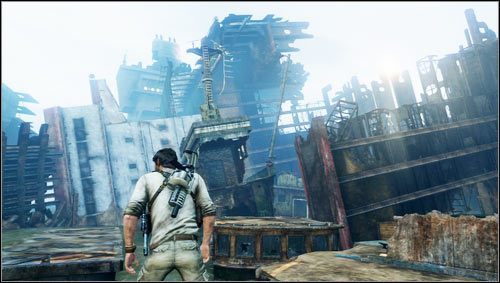 After the battle, we go to the ship with a high turret and armed with stationary armored cannon [1].

We go to the top of the ship and climb up the tower [1]. At the very top, we get onto the line and jump onto metal tubes that look like a piece of ladder [2]. We climb them despite numerous falls.