This page of the guide contains the walkthrough of chapter 9 of Uncharted 3 Drake's Deception. The chapter is titled The Middle Way and is an eventful one. During it Drake must defeat Charlie in a one-on-one duel (mini boss), deal with many mercenaries (some of which will be using large shields), solve the stone globe puzzle and complete an escape stage. 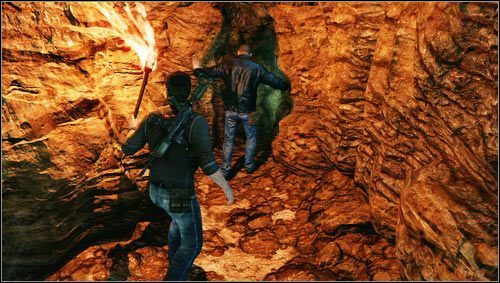 With a torch in hand, we move through the cave and push still intoxicated Charlie through a narrow gap [1].

In the room with the candle, Charlie will stop before another rift. This time, when we try to push him, he will initiate an encounter with us [1]. Due to the fact that this is our ally, we try not to hit him too much, just counter his attacks and break from grips. After a short struggle, he will begin to strangle us [2] and in the end we will be saved by other comrades. 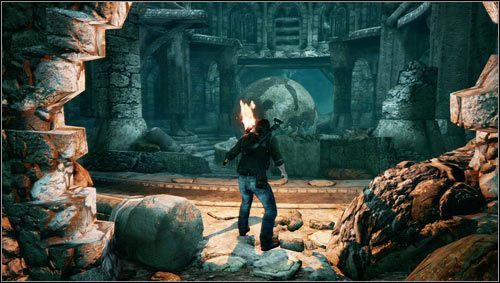 Then we pass through the crack and jump down the slope to find ourselves in a spacious room with a large stone globe [1].

We go to the other side of the room and, together with Charlie, we climb up the stairs on the left side [1]. Here we find four statues with wood which should be set on fire [2]. This will illuminate several areas on the globe below.

Because nothing happened, we search the floor to find an entrance [1] to the next room. We will end up in a spacious room, in which we need to set a lamp on fire to notice that the area is full of spiders [2]. 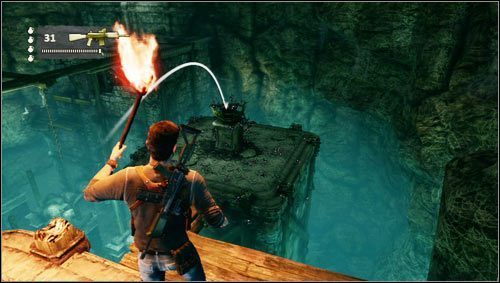 Our task is to get to the other side of the room in such a way that we are not eaten by the small beasts. In order to do this, we need to set subsequent braziers on fire and jump towards them so that their light repels the spiders. The first brazier is slightly below us. We throw a torch at it so that it is set on fire [1] and then we jump over to the illuminated pillar.

On the left we can see another brazier [1]. We light it by throwing a torch at it and then jump onto the chain suspended from a beam [2]. We jump to the other chain and from it we jump to the right onto the stairs. We quickly run up the stairs and over a wooden beam to get to the brazier that we just set on fire.

We set another brazier on fire and we jump onto the chain to reach it [1]. Another brazier can be found below, next to a small waterfall [2]. As usual, we light it up and jump towards it.

We now have to raise the shutter using the machine with cranks [1] and wait until the bottom between us and our companions is filled with water. Then we swim to the other side of the pit and lift the other gate [2]. 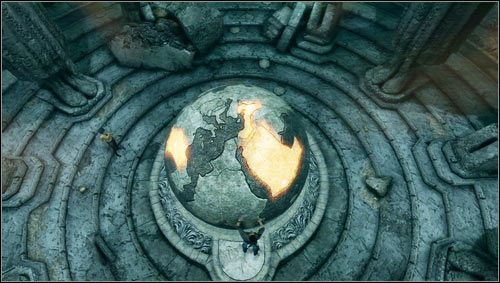 Thanks to our actions, we will be able to rotate the stone globe. We run up to it, get on the landing and start thinking. We have to set the globe so that the illuminated areas merge with the contours on the globe. The stars located both on the stone ball and in the shafts of light will help us to configure the globe. Note that you can use both analogs to rotate the globe. When we have the correct position [1], a hidden passage will be revealed on the upper floor.

We go upstairs to the monuments with braziers and enter the winding stairwell [1] to get to the tomb. Here we find a crypt [2] with the second half of the artifact lost in France. 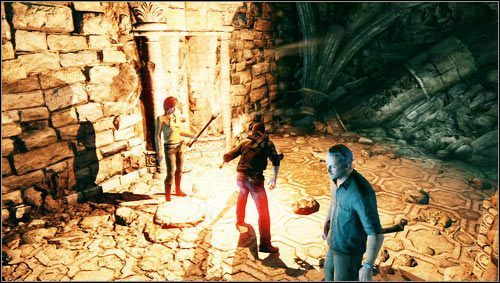 Unfortunately, we will hear the voices of our pursuers behind the wall. The exit from the tomb can be found by moving the wall on the left side, at the end of the blind corridor [1].

Once outside, we will run into Marlo's [1] men and, after a short cut-scene, an escape stage will initiate. As we follow our comrades to the tower, we must remember to make occasional evasions when we are guided by laser sights. [2]

After we run up the wooden stairs, a cut-scene will initiate. Then we have to cover Sullivan who is helping the injured Charlie. This is not an easy task, as we have just lost our weapons. Therefore, we jump at the first opponent with bare hands and take his weapon [1]. While we are fighting the enemies, we need to break through to the drawbridge [2].

On the way, we will encounter enemies equipped with riot shields [1]. We can either try to overwhelm them with bullets, hoping that they will lose their balance, or we can take them out in melee combat. It is worth taking the shield while going to the drawbridge, as it can be used to take cover from enemies hidden in the building behind the bridge [2].

Once inside, we open the gate and make our way along the walls. The easiest way to get rid of the enemies with riot shields is to use grenades [1]. At the end of the wall, we stop and kill the enemies on the tower on the left [2]. 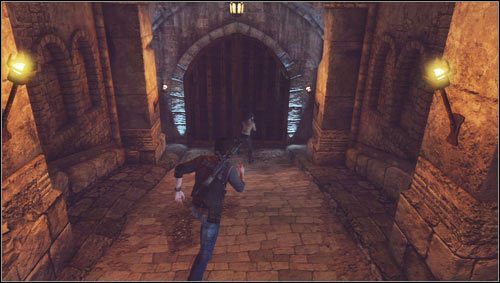 Running down the tower, we kill several enemies and then open the wooden gate [1] to eventually escape from the citadel.