This page of the guide contains the walkthrough of chapter 5 of Uncharted 3 Drake's Deception. The chapter is titled London Underground and, in accordance to the title, the characters travel through numerous underground tunnels. During the initial part of the stage, we need to climb and solve simple environmental puzzles alternately. Once we reach the abandoned metro station, we will run into bandits, some of which will be armed, among others with weapons with laser sights. 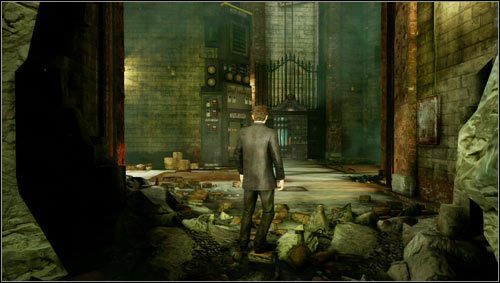 Together with our comrades, we leave the cave and enter the old subway tunnels [1].

The attempt to lift the heavy gate will fail and we will have to climb up to unlock the counterweight [1]. To the left of the door there are rungs [2], which we climb as high as possible.

We overcome a small ledge and jump onto the pipes running along the wall [1]. We move to the left, then jump to the opposite wall and we approach the counterweight [2]. After unlocking it, our companions will move to the next room.

We will follow them from above, passing through a hole in the wall [1]. Balancing on metal beams, we jump over the broken fragment [2]. After a short while guards will enter the room and our friends will deal with them. 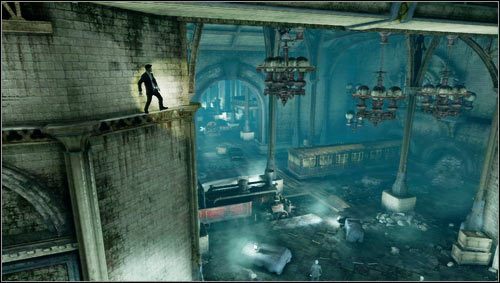 Afterwards, we jump to the wall, pull ourselves up and, while sticking to the wall, we get to the hanging chandeliers [1]. We have to jump over them to the other side of the room, where we find a piece of wall, using it to descend to the ground.

Our friends will be surprised by a guard - we need to sneak up to the enemy and press Square to eliminate him quietly [1]. After joining our comrades, we go across the tracks between the train wagons [2].

We will enter a spacious hall decorated with statues. At its end we will find a hole in the wall, at which we will eliminate two enemies by surprise [1]. We pass through the tunnel from which Marlo's people came and we go to the next historical room. Once there, we head upstairs [2].

After seeing the cut-scene, the tutorial will guide us through the additional methods of silent enemy elimination. The first one is to jump onto an unsuspecting enemy [1], the second is to attack the foe from behind through a low cover [2]. As soon as we get rid of the enemies, approach the table located in the center of the room.

Once the cut-scene ends, we will enter the detective mode and our task will be to search the room. From the notebook we will learn that we are looking for the head of a golden doe from Drake's ship [1]. It is suspended high on a pillar located in the middle of the room [2].

In order to get to it, we need to approach the second column in the middle of the room and climb it [1]. We traverse to the right [2] and jump to the pillar with the head of a doe. 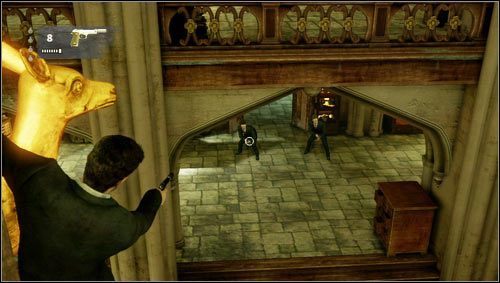 After jumping on the doe, the opponents will break into the room. Eliminate the first pair while hanging from the bust [1].

Once we fall to the ground, we take out other enemies. If we run out of ammo, we charge the enemies with bare fists [1] and pick up their pistols and ammo. Afterwards, we go through the door and start escaping through the same way we came here [2].

While in the tunnel, we deal with the men in black [1] and enter the spacious room adjacent to the subway tunnels. A series of ambushes will be awaiting for us, in which opponents will be hidden in streaks of smoke. Use covers and avoid enemy laser sights during the encounters.

We will be able to see pointers glowing in red in the clouds of smoke [2], thanks to which we will be able to easily locate and shoot hiding enemies. We should not rely on our comrades, because they will often prove to be completely useless. We have to make sure that nobody gets us from the side and unexpectedly fires or engages us in melee combat.

If a melee encounter cannot be avoided, we try to fight while staying behind cover and use the attacks and grips learned so far. Aside from the regular attack and a counterattack, we can also grab the enemy and throw him against the wall or other obstacle, using it to quickly defeat the attacker. Enemies approaching as from around the corner can be quickly eliminated with a surprise attack.

Once the first ambush is over, pick up the ammo and a small "KAL 7" rifle [1]. This is a high rate of fire weapon with low accuracy, effective at close and mid ranges. When approaching the trains [2] we need to be very cautious, as enemies will appear relatively late, will be better armed and will also surprise us from the roofs of wagons.

The last major encounter is awaiting us at the end of a spacious tunnel [1]. Opponents, despite being well armed, will not surprise us with advanced tactics, allowing us to easily control their position. Once the encounter is over, we pick up the weapons, including "M9", a larger, more accurate rifle, excellent for shooting at enemies hiding behind covers. After passing through a narrow tunnel in the wall on the left [2], we deal with the enemies and go to the top of the stairs.

We carefully lean around the corner to look into the room [1], in which a group of attackers armed with sawed-off shotguns, extremely effective at close range, is hiding. Once the area is cleared, we climb up the ladders located on the left side of the room [2]. 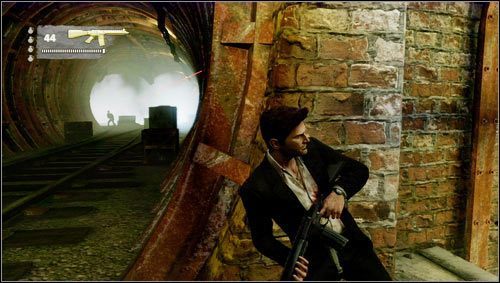 We run into a passage leading into a wide tunnel. We stick to the entrance of the tunnel and look to the right [1], where well-placed opponents await us. We should eliminate most of them before we get on the rails.

Once we have cleared the rest of the tunnel, we stock up on resources. Since we can carry one type of pistol and one rifle or shotgun, we should not get too attached to the acquired weapons. On the contrary, it should be changed as soon as we run out of ammunition and the moment is right.

From time to time we will run into the "Mag 5" [1] pistols, characterized by high firepower. Unfortunately, due to the limited amount of ammo that we manage to acquire, they are not the best choice when we do not have enough ammo to the secondary weapon. By moving along the rails, we will reach an underground station [2], which will be full of enemies. Once we initiate the encounter with the enemies occupying the platform, several foes will try to get behind us by sneaking behind the train standing on the tracks.

After the fight, we leave the station by the stairs [1] to get to the next opponents. Once we are done with them, enemies will start shooting at our position through the closed part of the room [2]. Ignore them and run up the stairs on the left side. 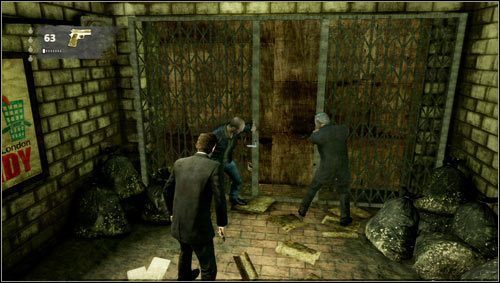 While at the top of the stairs, we turn back and kill the enemies trying to surprise us. Afterwards, we approach the door where our companions are waiting and we shoot the lock. When Charlie and Sullivan open the passage, we break through the wooden barricade [1].