On this page of our guide you can find the walkthrough of chapter 1 of Uncharted 3 Drake's Deception. This is a prologue that is an introduction to the actual campaign, but that does not mean it is devoid of any challenge. Nathan must take part in a bar brawl, which is simultaneously a tutorial of the melee combat system. 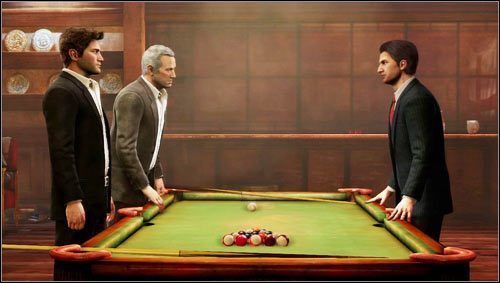 The game begins with a cut-scene that ends with Drake and Sullivan's failed deal with Talbot [1] and a bar fight.

The game explains the basics of melee combat system through the first several blows. Attack your enemy by pressing the Square [1], or use a counter activated with Triangle, when the icon of the counter appears in the bottom corner of the screen [2].

During the battle, one of the opponents will grab main character - in order to release Drake you have to press the Circle button [1]. Until we are released, we can counter the attacks of the opponents as soon as a Triangle [2] icon appears on the screen. 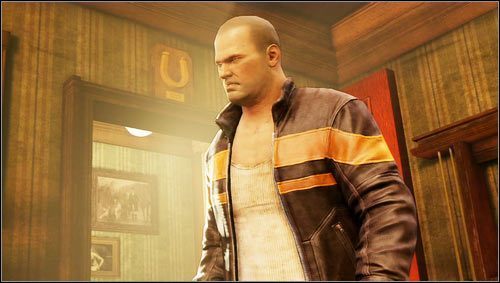 Once the enemies in the room are defeated, follow your companion to the doors. The path will be blocked by a muscle head [1]. He will throw Drake through the window to the lower level of the bar, where you have to deal with more enemies.

You will now be able to grab the enemies by pressing the Circle button. A grabbed opponent can be then thrown in any direction by tilting the analog stick [1] or attacked with a melee strike. If you are near any element of the environment (table, chair, bar with bottles), Drake will make use of anything on hand to deal more damage to the enemy [2]. 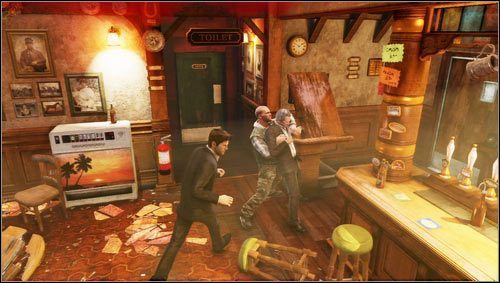 Dealing with enemies should not be a problem, provided that you counter the incoming attacks. The entire encounter can be played by using the elements of the environment. Finally, we help a companion to deal with the last enemy [1] and again we run into a muscle head who will move the encounter to the toilet.

Once Drake shakes off the meeting with the urinal, it is time to finally deal with the thug [1]. After the first ineffective attack, we need to switch to counterattacks, thanks to which we will win the fight with the tough enemy [2]. 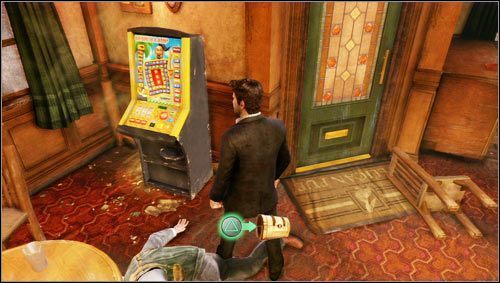 After leaving the bathroom, we search the room to find the first treasure lying on the machine [1]. The description of finding other treasures can be found at end of the guide, in the "Treasures" section.

Together with a companion, we go through the bar [1] to the kitchen, where we quickly deal with several opponents [2]. 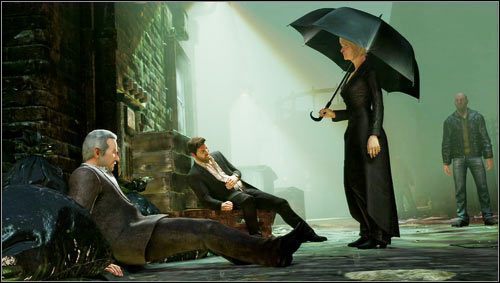 After passing through the door, we will go out into the streets. More enemies will ambush you, ending the transaction started at the beginning of the chapter [1].