It will be a hard night. In Ultimate Custom Night, you'll once again be locked up in an office controlled by deadly animatronics. This time, however, the scale of the threat will be much greater. You will have to face as many as 50 animatronics, which have appeared through the Five Nights at Freddy's series in recent years.

This Ultimate Custom Night Game Guide is a collection of valuable info to help you survive the many nights in the company of animatronics. Here you will find information about different game mechanics such as temperature and noise control or power management. You will also find the characteristics of all animatronics, together with their characteristics and tips on how to avoid death from their hands.

Ultimate Custom Night is a Survival Horror game created by Scott Cawthon, which is the final version of the Five Nights at Freddy's series. This time the campaign was abandoned in favor of individual nights, configured by the player or selected from a list of thematic challenges. In addition, achieving appropriately high results gives access to subsequent versions of the restaurant.

This chapter is devoted to gameplay mechanics. Here you will find a lot of important information to help you survive the night in the company of animatronics.

This chapter contains information about animatronics. You will learn about the behavior of individual animatronics and what is affected by the modification of their intelligence. 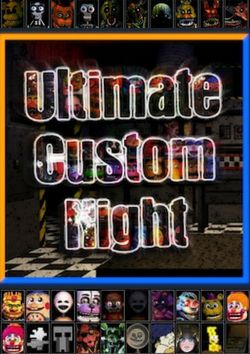 Ultimate Custom Night is a spin-off of the cult series of survival horror games Five Nights at Freddys, created by Scott Cawthon. Contrary to the previous entries in the series, this game was released for free on Steam.

In Ultimate Custom Night, the players assume the role of a night guard who works during the night (from midnight to 6:00 AM) in one of the buildings that belong to the Freddy Fazbear Pizza restaurant network. Animatronics, robots the size of a man, who deliver meals and amuse the children, are the main attraction of the restaurants. However, when the night falls, something evil and dangerous for everyone nearby wakes up in the machines.

The gameplay basics in Ultimate Custom Night, like in the majority of entries in the Five Nights at Freddys series, are similar to the childish play known as Statues, Red Light, Green Light, or Grandmothers Footsteps. The players start in an office while the animatronics begin in various parts of the map. The robots start walking towards the player (their speed depends on the difficulty level), but they stop when they are being seen on one of the industrial cameras available in the building. If the robots manage to reach the protagonist before time runs out, the players lose.

If animatronics get too close, cameras arent enough. In that case, the players must keep controlling the door to the office and ventilation shafts. In case of a direct danger, it is also possible to lock the entrances. However, this action consumes a great amount of energy. The energy also drops when the players are using cameras. If it drops completely, the electric devices will stop working and the players will become helpless.

In order to survive the challenge, the players must also learn to use other tools available in the game. They must control the levels of heat, noises etc. The option to set laser traps in ventilation shafts and to collect coins that can be traded for various gadgets is very useful as well.

The better the player deals during the night, the higher the score at the end. If the player reaches a specific number of points, he or she unlocks new maps and various gameplay modifiers.

As the title of the game suggests, the heart of Ultimate Custom Night lies in freely customizable nights. The players can select opponents (there are 50 robots from various games in the series available), determine the difficulty level (in a scale from 0 to 20) and select a map. The game also features sixteen special, themed challenges.

Similarly to the previous entries in the series, the graphics of Ultimate Custom Night consist mostly of static pictures with a few animated objects. The game lacks music. The majority of sounds are loud, disturbing noises that frequently appear suddenly in order to additionally scare the players.

This site is not associated with and/or endorsed by the Scott Cawthon or Scott Cawthon. All logos and images are copyrighted by their respective owners.