Creating spells may initially seem a little difficult and confusing. To be able to create a spell, first of all you need to have the amulet of spell. These amulets are like slots where you make spells and then you can use them in battle.

Each spell is made up of at least two cards - Effect Card and Carrier Card. This is the required minimum to create anything (there are some exceptions, where only those two cards will not work).

There are 15 different Effects - five groups of three cards in each of them. As the name suggests, they cast an effect on the spell, such as fire, frost, poison, etc.

There are 6 Carriers, they define the action of the spell - enchant, area effect, missile, summoning, trap and altar.

NOTE: in the case of the last carrier card (altar), use it in the first section, and then set the second section, creating a spell using only Enchant Card!

Modifiers: There are also 6 of these cards. Three of them are only available after using Missile Carrier (homing, ricochet, spray). The other three are: damage, protection and time. They are mostly used in combinations containing Carrier Cards: area effect and enchant. They can be combined (not all combinations are possible), sometimes completely changing the effect of the spell.

You can increase the number of each card (if you have more than one in your inventory and you have developed the proper skill) which multiplies the power of the spell.

All combinations of spells are described in another chapter of the guide, but do not pay attention to the values given in the tables, because these depend on your hero's level, number of willpower points and the number of used cards. 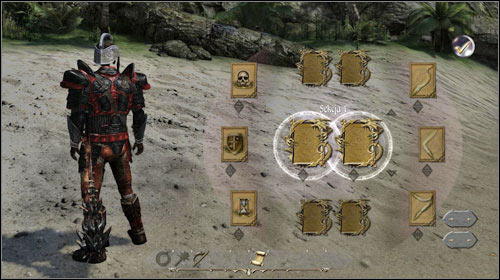 Magic creation screen. Unfortunately you cannot save them as alchemical formulas.

Spells can be combined in a chain of up to three different spells. Not all Carrier Cards allow you to set the next section. You can only do this if you create a spell using one of the Carrier Cards in Section 1 a: altar, missile, trap. Creating more than one spell section requires more mana, but allows to create some very powerful and deadly spells.

As a result, you obtain the following: after firing the missile, it spray into W missiles (depending on how many cards you used), when it hits the target it deals X fire damage to the enemy who's hit, in addition, after each hit it spawns a shower of anvils with Y area damage for a specific time. Bounced missiles hit another Z enemies (depending on how many cards you used), which also sustains X and Y damage.